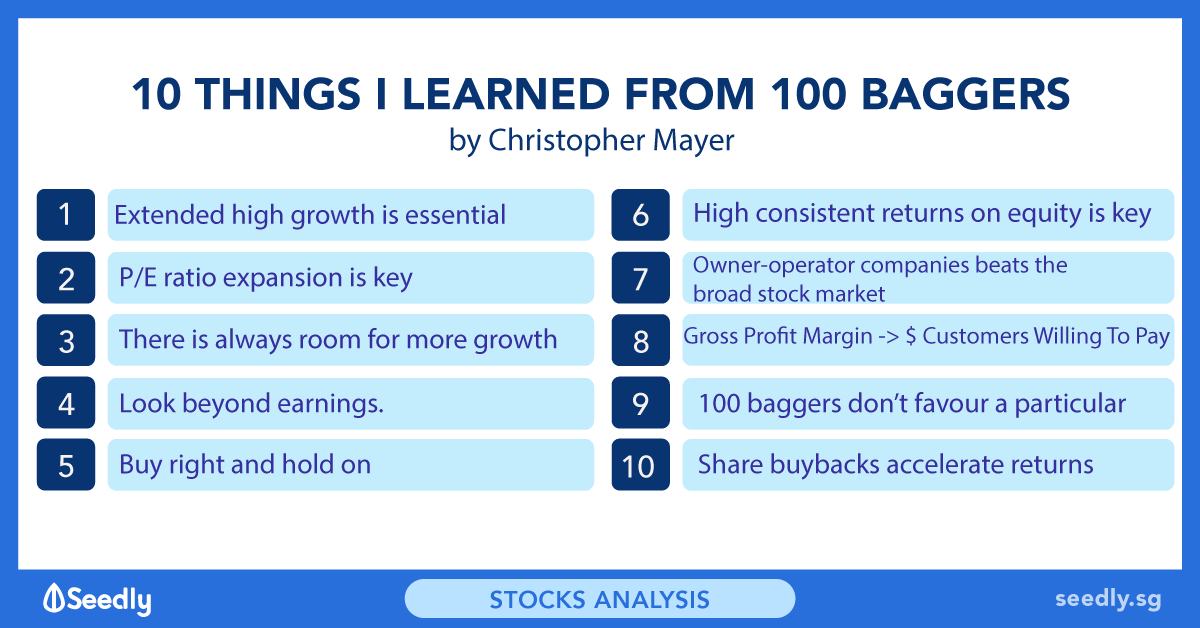 The term ‘10-bagger’ was first used and popularised by fund manager Peter Lynch to describe stocks that multiplied in value by tenfold.

Christopher Mayer, portfolio manager and co-founder of Woodlock House Family Capital, took this a step further and wrote a book to discuss about 100-baggers.

The survey turned up 365 companies and is built upon a similar study conducted by Thomas Phelps, a stockbroker and investor.

(Coincidentally, Phelps also discovered the same number of 100-baggers between 1932 and 1971 as published in his book 100 to 1 in the Stock Market.)

Without further ado, here are 10 things I gained from reading 100 Baggers: Stocks that Returned 100-to-1 and How to Find Them.

1. A company needs an extended period of high growth to become a 100-bagger

Ideally, a company can sustain growth in all aspects ranging from revenue, margins, and earnings per share (EPS).

Companies should have concrete growth drivers to expand domestically or internationally.

However, they do not always need a huge market and can also sometimes dominate a smaller niche.

On average, companies in the survey conducted by Mayer took 26 years to become 100-baggers.

2. P/E ratio expansion is the key to a 100-bagger alongside increasing EPS growth

But what do you do when a stock’s P/E grows extremely high?

In his book, Mayer quotes different opinions on what to do when stocks reach a lofty P/E ratio and concludes that investors should be ‘reluctant sellers’.

The decision boils down to whether your investment thesis in a company’s fundamentals is still valid and if you are still able to sleep soundly at night when the stock becomes high overvalued.

3. Small companies can grow by 10 to 20 times and still have room for even more growth

Because of this, it’s easier for small companies to become 100-baggers relative to larger ones.

Mayer stated that the median revenue for the 365 companies at the start of the study was about $170 million and their median market capitalisation was about $500 million.

4. Sometimes, we need to look beyond earnings

For instance, Amazon has spent a considerable amount in research and development (R&D) expenses, which reduced its reported earnings throughout the years.

It could have cashed out on its earnings, yet it chooses to reinvest for the future.

As a result, Amazon has become one of the largest companies in the world, earning its shareholders multi-fold returns since its listing.

5. Buy right and hold on

Mayer mentions that ‘one who buys right must stand still in order to run fast’. He shows the idea using a coffee-can portfolio – simply buying the best stocks and holding onto them for 10 years.

A coffee can approach not only insulates an investor from market noise.

But also protects them from emotions and volatility that could make them trade at the wrong times.

Mayer mentions betting big on our best ideas and avoid having too many stocks in our portfolios. In an ideal situation, 10-20 stocks would be sufficient to diversify your risk.

6. A company needs a consistently high return on equity to compound its capital in order to become a 100-bagger

If a company distributes a dividend, it has less capital to reinvest for future growth.

Due to this, high-growth companies tend to not pay a dividend and look to reinvest their earnings for growth.

A 2012 study conducted by Joel Shulman and Erik Noyes showed that companies managed by the world’s billionaires outpaced the index by 7% annually. When owner-operators have sizable ownership in a company, they will most likely be aligned with shareholders’ interests. High insider ownership is also often a protector against fraud. Competent owner-operators with good capital allocation skills usually take on more debt and deploy additional cash (instead of hoarding it) during a recession when good opportunities arise.

8. Gross profit margin is an indicator of the price customers are willing to pay for a product/service over its cost and serves as a measure of value added to the customer

Mayer quoted a study done by Matthew Berry, a former fund manager at Lane Five Capital: ‘If you can’t see how or where a company adds value for customers in its business model, then you can pretty sure it won’t be a 100-bagger.’

These findings suggest that companies with high gross profit margins have a resilient, long-term advantage over their competitors, and are more likely to become 100-baggers.

At the same time, the average company’s lifespan on the S&P index is shortening as shown in the chart below:

The key is to seek companies with economic moats that allow them to outgrow other companies and dominate their industries. Industry stability is another factor in determining the durability of a moat.

No moat is permanent and competitors may eventually figure out their way across.

Also, Mayer does not consider great management a moat in itself.

After share buybacks, the number of outstanding shares will fall and cause EPS and the share price to jump.

Warren Buffett famously agrees with share buybacks when shares are trading below their intrinsic value.