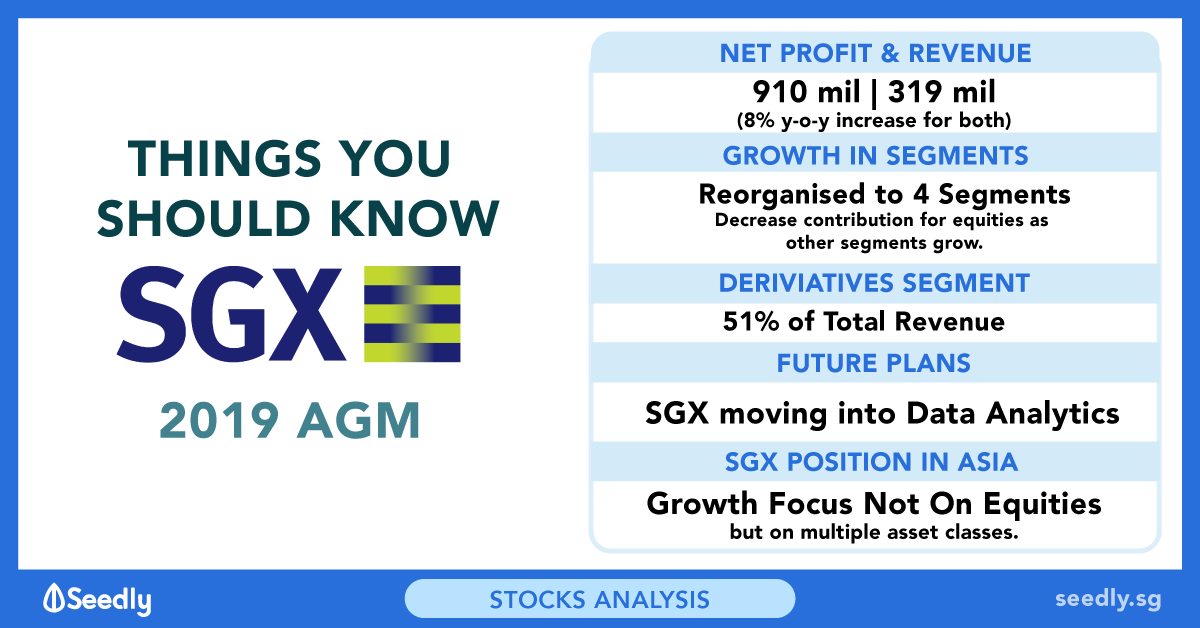 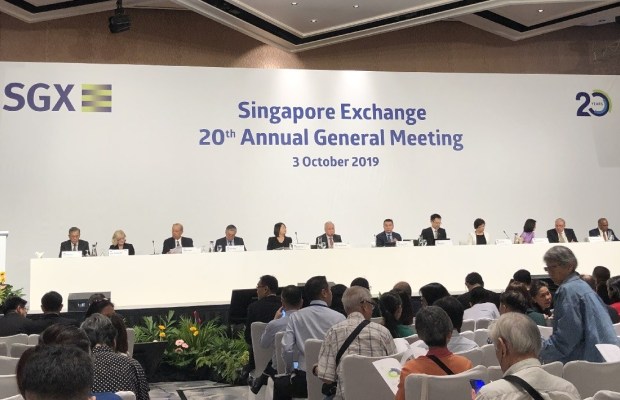 For many Singaporeans, the Singapore Exchange (SGX) is synonymous with our local stock market. But what many may not know is that SGX is also a leading multi-asset exchange that deals with bonds, derivatives, currencies, and commodities.

In fact, SGX (SGX: S68) now generates most of its revenue from its derivatives segment which has seen strong growth over the past few years. In contrast, its equities segment has seen recent headwinds as SGX has struggled to win new listings on the Singapore stock market. Will growth in the derivatives market continue to overshadow equities? I decided to attend the company’s latest annual general meeting to learn more.

Here are six things I learned from the 2019 SGX AGM:

1. Revenue and net profit both increased 8% year-on-year to S$910 million and S$319 million in FY2019 respectively. This was mainly led by strong growth in the Derivatives segment, with revenues growing 35% y-o-y from S$340 million to S$460 million. CEO Loh Boon Chye said SGX saw higher transaction volumes from international customers — especially for trading in derivatives and futures – which is expected to increase with the opening of new offices in New York and San Francisco.

2. The Derivatives segment now contributes 51% of SGX’s total revenue. This was followed by Equities and Fixed income (38%) and Market Data & Connectivity (11%). Revenue from Equities and Fixed Income decreased 15% y-o-y to S$348 million on the back of fewer equity and bond listings, and lower securities trading volume. Revenue from Market Data & Connectivity increased 4% to S$103 million due to the increased uptake of colocation services and connectivity subscriptions. Annual dividend stayed constant at 30 cents per share, representing 82% of net profit paid to shareholders.

3. One shareholder asked about the management’s future plans for growth in each segment, and which had the most potential for growth. The CEO said that he aims to grow each business segment and there are growth opportunities across all asset classes. Moving forward, SGX will reorganise its business into four segments: Fixed Income, Currencies, and Commodities (FICC); Equities (including cash and derivatives); Data, Connectivity and Indices (DCI); and Global Sales and Organisation. He expects the new FICC segment to double its revenue over the next five years and the DCI segment to continue to scale, while the Equities segment will continue to introduce more derivative products to meet the needs of market participants. The newly organised Equities segment currently comprises around 70% of total revenue, which will fall into the sixties as other segments grow in contribution.

4. Another shareholder asked about SGX’s investments in associated companies and the rationale behind them. The management explained that SGX has recently focused on fintech companies as they see this as a play on recent trends in the trading market. Firstly, there has been an increasing electronification of asset classes, most notably for equities and fixed income. Secondly, there has been an increasing convergence of over-the-counter and market exchange clearing, where investors seek higher efficiency in trading. SGX’s investments in this space help to develop the necessary platforms for such trading. For example, SGX bought a 20% stake in BidFX for US$25 million in March 2019 to expand its offerings in forex futures.

5. Apart from the fintech space, SGX is also moving into data analytics. Growth in this area has been helped by SGX’s partnership with data companies such as FactSet. Improvements in the area of data analytics have been seen mostly in SGX’s indices, especially in REITs and equities. Revenues gained from indices also drive revenue in the derivatives space, while also driving market data that can be brtttoadly used across the different product offerings of SGX.

6. Lastly, one discussion centred over the Hong Kong Exchange’s proposed takeover of the London Stock Exchange (which eventually fell through), and where SGX sees itself within Asia. The management believes that SGX has the potential to be the premier platform for investors in Asia. However, to achieve this, SGX’s focus should not only be on equities but on multiple asset classes. For example, in the case of the Chinese equities market, SGX wants to be able to provide investors with varied choices such as fixed income instruments or various derivatives. The goal is for an investor to look at a particular region and be able to choose from multiple products to invest in via SGX.

Why not check out Seedly’s QnA and participate in the lively discussion surrounding stocks like Singtel (SGX: S68) and many more!