3 Strong Singapore Shares To Pump Up Your Stock Portfolio 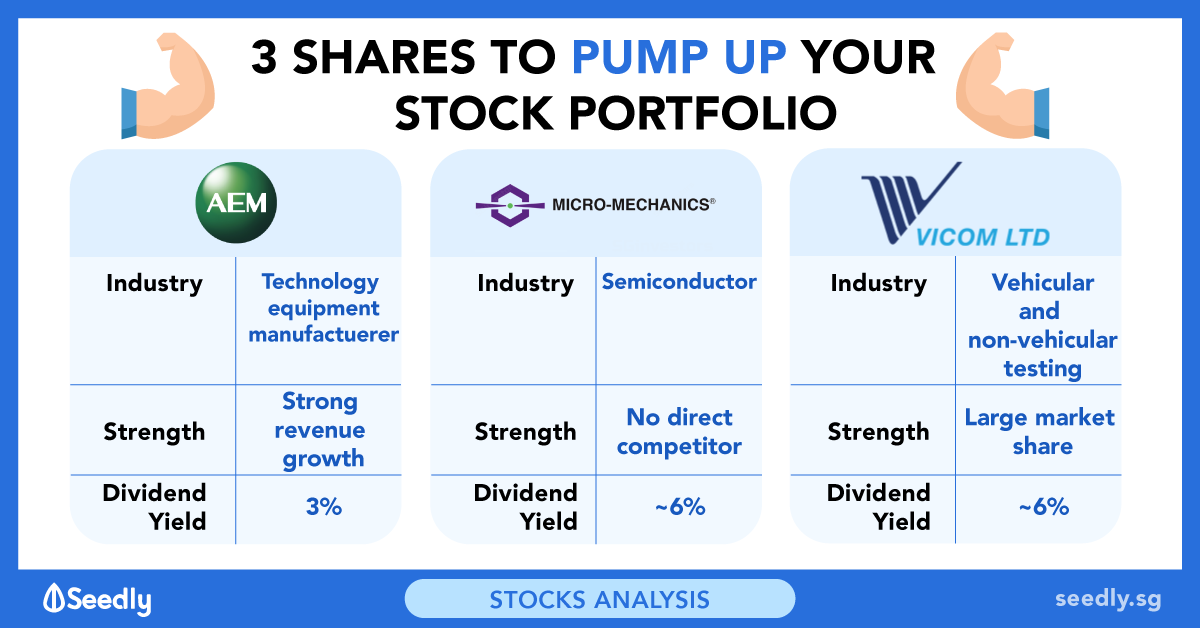 3 Strong Singapore Shares To Pump Up Your Stock Portfolio

With more than 700 stocks listed on the Singapore stock market, it would be difficult to pick out the crème de la crème. Also, with the scary headlines of an economic slowdown in Singapore, you might be freaked out to invest in stocks.

To make life simpler for you and less scary, I have filtered out, using a stock screener, three of Singapore-listed stocks that you can consider researching further for your stock portfolio. Without further ado, let’s dive into those companies.

AEM Holdings Ltd (SGX: AWX) is involved in the designing and manufacturing of equipment and precision components.

The company has a strategic partnership with one of the largest semiconductor companies in the world (believed to be Intel). AEM has been developing and manufacturing top-notch test handlers and consumables for this key customer.

A key risk for the company is, as you might have figured out, the high revenue concentration from its main customer. According to its 2018 annual report, this customer contributed to 94% of total revenue. If for any reason the customer pulls out, AEM would be hit badly. Having said that, the probability of this happening is low, in my opinion, as the partnership has been carrying on for over 18 years.

Micro-Mechanics (Holdings) Ltd (SGX: 5DD) is involved in the designing, manufacturing, and marketing of consumables and precision tools that are used in the semiconductor industry.

The company has a competitive advantage in that it does not have a single direct competitor providing the full range of services that it currently provides. This is also evidenced by its high gross profit margin and net profit margin of 53.7% and 21.5%, respectively, for its full-year ended 30 June 2019 (FY2019), which was announced two months back.

Despite the business strengths that it has, Micro-Mechanics’s revenue for FY2019 tumbled 7.3% to S$60.3 million while net profit declined by 24.5% to S$12.9 million. The poor showing was mainly due to a slowdown in the global semiconductor industry. No matter how strong a business is, it can still be affected by the vagaries of the industry it is involved in.

However, I believe the slowdown is short-term in nature. Over the long run, demand for Micro-Mechanics’ products should be aplenty given the ever-increasing use of chips in our everyday lives.

To add more credence, Singapore’s Deputy Prime Minister Heng Swee Keat said last month that despite the slowdown, the future of the global semiconductor industry remains bright and that global demand in the long-term is robust.

Investors are also paid to wait for the semiconductor cycle to turnaround as the company pays excellent dividends; dividend per share has grown 1,150% in all since FY2003.

VICOM Limited (SGX: V01) is a provider of technical testing and inspection services largely in Singapore. VICOM has around 70% market share in the vehicle testing business in our city-state.

VICOM’s 2019 second-quarter revenue grew 3.7% year-on-year while its earnings rose 4.9%. With the growth in its bottom-line, VICOM increased its interim dividend by 5.3%, from 13.46 Singapore cents last year to 14.11 Singapore cents. I can already see dividend investors jumping in joy.

There’s a high chance that the company will do great at least for the next few years, despite Singapore’s push for a car-lite society. Well, you and I know that cars provide convenience and a status symbol for Singaporeans, so it would take many years for cars to become obsolete like horse carriages.

There’s also data showing that more car owners are hanging on to their cars beyond the 10-year mark. This means that they have to be inspected annually, instead of once every two years, which is the case for cars between three and 10 years old. More inspections mean more revenue for VICOM. Ka-ching!

At VICOM’s share price of S$7.75, it has a trailing PE ratio of around 19 and a trailing dividend yield of 5.9% (including the special dividend given out in the 2018 fourth-quarter). Some would argue that there’s not much growth in VICOM; I agree with that. But this company might attract dividend investors.

All three companies featured above either have no debt or negligible debt. This, coupled with the massive hoard of cash that they hold, will help the companies weather through any severe economic conditions. The last I heard, companies with very little debt and loads of moolah haven’t gone bankrupt.

Participate In The Stocks Discussion Now!

The information provided by Seedly serves as an educational piece and is not intended to be personalised investment advice. Readers should always do their own due diligence and consider their financial goals before investing in any stock.