This is the story of how a little girl, me, earned 10% interest from loaning her dad her piggy bank to save money he would otherwise be spending on cigarettes and buying 4D and TOTO.

Don’t get me wrong, he wasn’t a heavy smoker nor did he spend an exorbitant amount on the Singapore Pools. He probably even spent a little less than the average Singaporean on these things. Yet, we were able to save $1000 a year since 2008, and that little bit a month has amounted to $10,000 today. 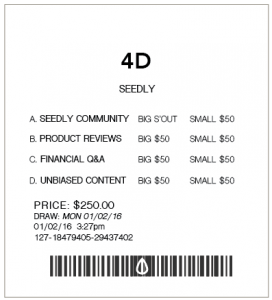 My dad used to spend $12 on TOTO and 4D, as well as $10 on cigarettes every week. I still remember the 4D lucky number would be our car plate number or house unit number —  I’m sure many Singaporeans can resonate with this.

Spending $22 on 4D, TOTO and cigarettes can be pretty typical or even less than average since regular smokers usually buy two packs of cigarettes, amounting to $20 a week at that time. Many Singaporeans habitually spend this amount and similarly, my dad did this for many years.

This went on until one day in 2008, when my dad asked to borrow my extra piggy bank from me. He told me he was going to stop buying the lottery and try to stop smoking as well.

In return for the piggy-bank “rental”, he said happily that he would give me a 10% cut of whatever the savings are at the end of the year. Honestly, as a little girl still in primary school at that time, I didn’t really care how much money he was going to give to me. But in hindsight, 10% was a pretty amazing deal. So from that day onwards, he would put the $88 he would otherwise spend on his bad habits into our piggy bank instead — and this went on for the next 10 years until today.

A couple of years on, I realised what triggered his sudden change was when an old friend gave him some advice over golf one day. That old friend was in the lottery business, and have seen many people put their money in all kinds of bets year on year with negligible returns. So when they were discussing about my dad’s habit of putting $10 on our car plate number in 4D every week, this was what he said:

“You just put that money aside and see, by the end of the year

I think hearing this personally from someone in the industry really brought the point across. He took the advice and combined it with some determination to quit smoking for better health.

This was the amount of money he was able to save:

Note: Cigarette money is capped at $10 for easier calculation. Cigarette packets are $12-$13 on average today.

Imagine if you quit the casino (that essentially has strategies to make you gamble more anyway) or soccer betting and horse betting, leaving that money for your family’s savings instead. Even setting aside all your $5 notes could accumulate into much more over time.

There is no magical formula involved, it simply shows how a typical Singaporean could change his lifestyle by just a bit, and make a whole lot of difference to his savings over time. He chose to put cash into a piggy bank instead of an actual bank at first because it was more encouraging to see cash accumulating every time he put money in, and he could also include his daughter in this process.

What did he do with those savings? We would go for a nice family dinner every couple of months and the rest of the savings would be put aside in the bank for further saving.

To put things in a better perspective, this is how a $10,000 savings would look like if we saved the money in a higher interest yielding savings account instead:

Note: Interest rates are based on the realistic total we calculated here.

This saving method clearly isn’t rocket science, nor is $88 a month a lot of money to some of us, but what it does show is that bit of discipline with your money can go a very long way! I hope this simple little story of mine can inspire you to take a further step towards making smarter financial decisions. A little can mean a lot.

Have some financial insights to share, or simply have one to ask? You can do so on our community platform where we talk about all things finance. Hop on!