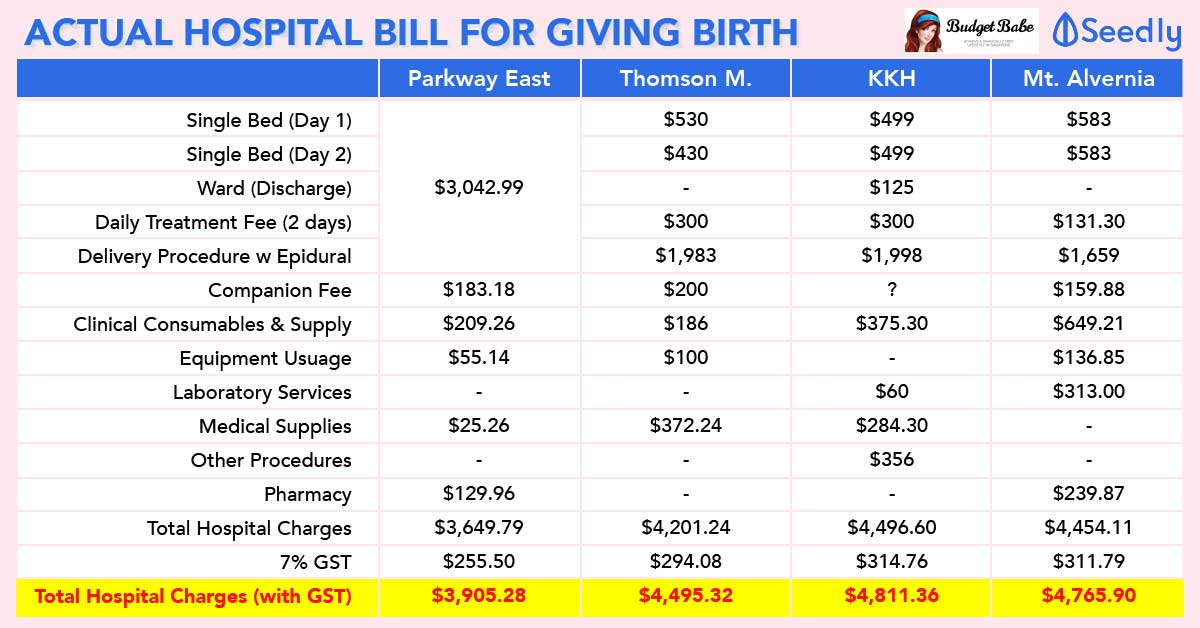 As a follow-up to my previous post where I estimated the bill sizes for delivery in various hospitals in Singapore, before deciding to go with Thomson Medical Centre given their affordability and other reasons detailed here.

I managed to gather the actual hospital bills for a few hospitals from my fellow mamas who had delivered close to my dates (2 – 3 weeks before/after), and here’s how they compare:

Gynae and anaesthetist fees have been excluded from the comparison as these service fees vary according to the professionals who are charging them. Between the few of us, our gynae fees ranged from $2000 – $3500, whereas the anaesthetist fees were from $700 – $775.

Do note that your choice of gynae and anaesthetist will also determine whether your final bill paid to the hospital is on the higher or lower end, as the hospital collects the fees on the doctors’ behalf.

Similarly, I’ve excluded paediatrician fees as the charges varied from $300 – $900+ for the bills I studied. Note that PD fees will depend on the PD you choose and expect to pay more for the more popular ones.

In my previous post using estimates, I actually predicted that the order from most affordable to most expensive would be Parkway East –> KKH –> TMC –> MAH, but as it turned out, the results were surprising.

The key observation I realised was that while MAH may seem to have a cheaper quote for their single room package, the actual bill differed by a large margin. I’m not too sure why, but based on the two MAH bills I’ve studied, it seems like their consumables are charged at a much higher rate? At the end of the day, do also note that the amount and type of consumables you utilise during your hospital stay may differ as every patient is different.

Anyway, if you were wondering whether going with KKH as a private patient will definitely be cheaper, I hope this article dispels that notion that it isn’t necessarily so. Much of it also depends on your gynae / anaesthetist / PD fees and how smoothly / complicated your delivery ends up being.

I’ve also included my actual bill with TMC here for reference, lest any of you are keen on potentially delivering there as well and want to know how much mine cost: 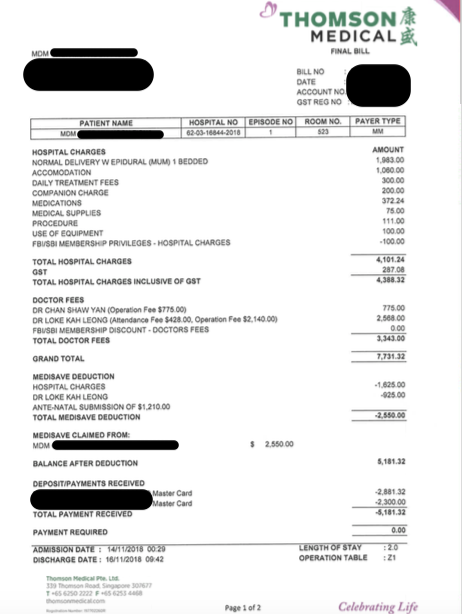 There’s also a second part to the bill, which is your baby’s bill. Here’s mine from TMC: 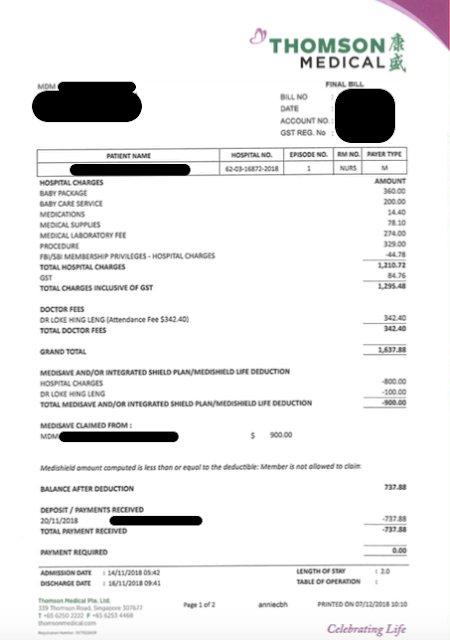 Our out-of-pocket cash expenses ended up being about $6000, which was much lesser than I had budgeted for initially (we had saved for the worst-case scenario: an emergency C-section, and I highly encourage that everyone does so because you really cannot predict what will happen during delivery). On this aspect, we got lucky as I had a really smooth and short labour (9 hours in total).

I also received TMC’s Breastfeeding Essentials discharge bag (which I raved about in my previous article), and it is a gorgeous sleek diaper bag that I can foresee myself using for sure! For those who are interested to see MAH’s discharge bag, here are photos from my friend who delivered at Mount Alvernia a few days before me: 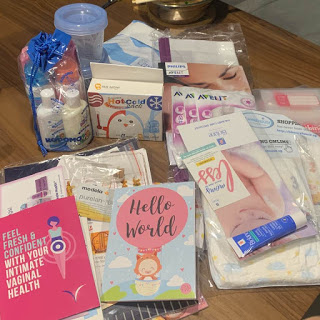 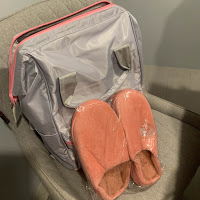 Call me superficial, but I’m mighty pleased with my TMC discharge bag by far. Not only are the items super useful (I mean, a branded Hegen breastfeeding pump?! And calcium supplements? And breast pads? And milk boosting tea? And a nursing cover? I could go on and on, you get my gist), I’m a suckler for the gorgeous black design of TMC’s diaper bag as well.

But the one I received has since been discontinued (Nov 2018 was its last month), and for mothers who are delivering in TMC from December 2018 onwards, TMC has just revealed this on their page as the revamped discharge bag: 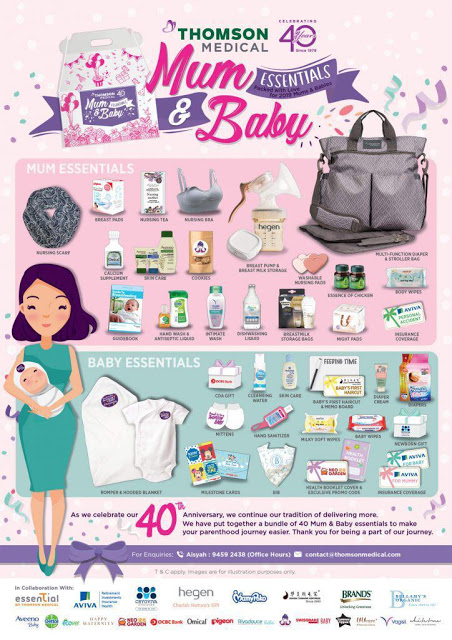 This goodie bag makes me somewhat wish my baby was born in December or 2019 instead, LOL! TMC has truly outdone themselves this time. I mean, a nursing bra?! And milk-boosting cookies by Singapore Lactation Bakes, which I’m also currently taking to boost my breastmilk supply?! And chicken essence!? And diapers?! And mittens?! And a baby bib?!

I’m betting this new bag of goodies cost at least $300+. What a steal!

When it is time for my second kid, I’ll most probably go back to TMC again for my delivery. They’ve given me nothing but a great experience for my firstborn.

P.S. Carpark issues? We visited TMC on various days and at various timings (1pm, 4pm, 10am and 12 midnight) and had no problems on all our visits, so there weren’t any concerns for us at all.

Disclaimer: During my stay, I was upgraded from a single room to a Premier Single by Thomson Medical Centre for my delivery due to availability.

Bill sizes frequently differ due to mostly gynae operation fees. Hospital packages form about half of the equation (sometimes lesser, depending on your gynae fees). The bill comparison between the four hospitals here are based on the bills I received from my friends who delivered during a similar period as me but may not be indicative of all bills, so I highly recommend that you book a hospital tour and get a bill estimate directly if you’re unsure.

A huge thank you to Allison aka Heartland Boy, Elaine, Estee and Karen for sharing your actual bills and parenthood journey with me as we all become first-time parents!

Budget Babe is an ordinary lady striving to achieve financial freedom in Singapore before the age of 45. She is always looking for cost-effective ways to live a fulfilling life in amidst Singapore’s rising costs and writes in order to empower fellow Singaporeans on taking charge of their own lives and finances. The final goal is to eventually break free from the competitive rat race.