What 3 Investors Like About Amazon, Tencent, and Singapore-Listed Micro-Mechanics 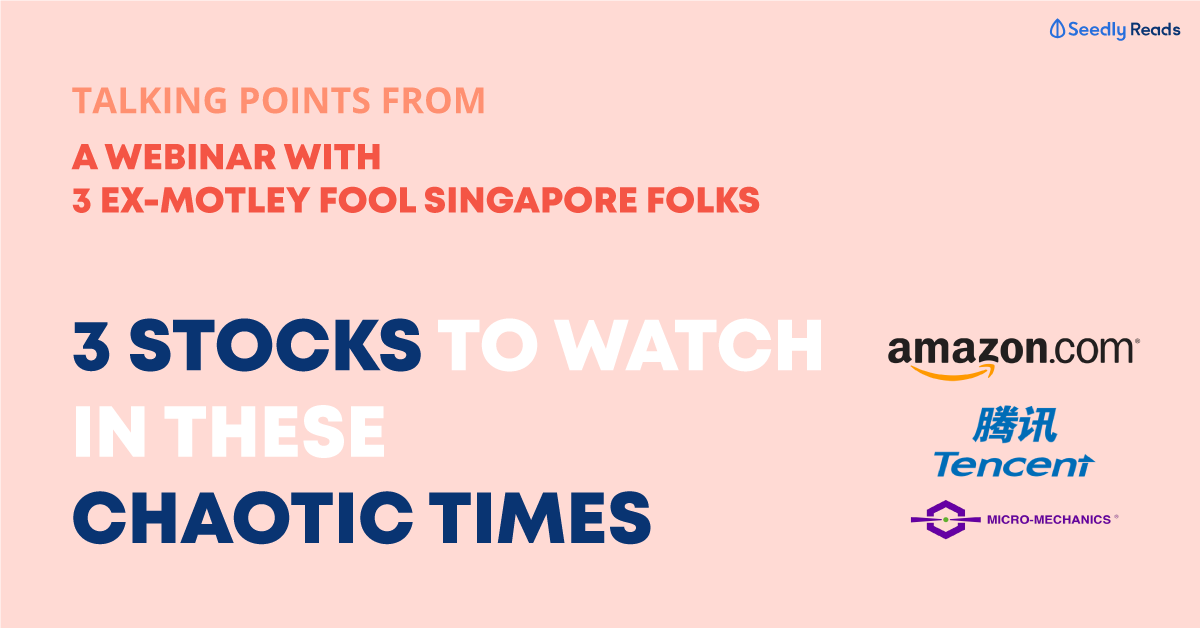 What 3 Investors Like About Amazon, Tencent, and Singapore-Listed Micro-Mechanics

At the end of April, I had the chance to be featured, together with my investing buddies Stanley Lim and Chong Ser Jing, at Stanley’s Value Invest Asia webinar.

Both Stanley and Ser Jing were my colleagues when I was with The Motley Fool Singapore, before joining Seedly. Now, Ser Jing runs his own investment blog at The Good Investors, together with another ex-colleague of mine from Fool Singapore, Jeremy Chia.

During the webinar, Stanley, Ser Jing, and I discussed our favourite stock ideas, on top of answering questions from viewers.

You can view the video below (video lags for the first 10 minutes though):

The stocks we covered were:

We touched on the following points (thanks to Ser Jing for compiling the list):

Right here, I’ll be covering the company I talked about during the webinar, Micro-Mechanics. For the rest of the companies and the question-and-answer segment, do jump in from the video links above.

Micro-Mechanics is a company that was established 37 years ago in Singapore to mainly serve the semiconductor industry.

The company serves over 600 customers from its five manufacturing facilities located in Singapore, Malaysia, China, the Philippines and the US. Micro-Mechanics’ customers include nearly all of the American, European, Japanese and Asian semiconductor makers. Micro-Mechanics has a financial year that ends on 30 June each year. The company’s factory in China, located in Suzhou, largely serves the domestic market and not the export market. Therefore, Micro-Mechanics’ China sales remained relatively steady for FY2019 despite the US-China trade tensions.

There are five main traits I like about Micro-Mechanics. Firstly, the company’s revenue and net profit have grown over the years.

Micro-Mechanics’ business looks to be turning around since the first quarter of FY2020.

Secondly, Micro-Mechanics has strong durable competitive advantages, in my opinion.

Micro-Mechanics produces consumables that are required to be replaced frequently by its customers, creating recurring revenue for the company. This key feature makes Micro-Mechanics less susceptible to the semiconductor industry cycle than an equipment supplier, for example. Usually, equipment suppliers mainly see one-off business transactions, until the equipment needs to be replaced many years down the road.

Micro-Mechanics also doesn’t have any single direct rival which competes on its full range of products and technical services in its current geographical markets. The breadth of services offered by Micro-Mechanics makes it a one-stop shop for its clients.

Return on equity (ROE) was at 22% in FY2019. Any ROE figure above 15% is high in my books. ROE is a measure of how efficiently management allocates capital.

Thirdly, Micro-Mechanics has a strong balance sheet with loads of cash and no debt (more on that later). A robust balance sheet is essential to ride through tough economic conditions, such as right now.

Fourthly, the company has great long-term prospects in the semiconductor industry. There will be a continued demand from technologies and devices that require chips, such as mobile phones, artificial intelligence (AI), and fifth-generation (5G) cellular communication.

Micro-Mechanics can also ride on the short-term demand surge due to businesses putting in business continuity plans (BCP) and employees working from home (WFH) on the back of the Covid-19 pandemic.

Lastly, I like that Micro-Mechanics’ founder and chief executive, Christopher Reid Borch, has plenty of skin in the game. As of 30 August 2019, he owned around 52% of Micro-Mechanics, either directly or indirectly.

Micro-Mechanics released its financial results for its third quarter of FY2020 on 24 April 2020. Micro-Mechanics’ top-line growth was due to a broad-based sales increase across almost all its geographical markets. Sales in China increased by 14% despite the temporary closure of its Suzhou factory between 3 February to 12 February in compliance with the Chinese government’s directives to limit the spread of the coronavirus.

The company’s balance sheet remained rock-solid, with S$16.1 million in cash with no debt. On this front, Micro-Mechanics commented:

“Building a great manufacturing business without debt helps to foster a culture of resourcefulness, discipline and careful decision making. In addition, we would like to attract shareholders who share our approach to long-term investing.”

I agree with that approach and it has endeared me to the company more.

Free cash flow, however, dipped 15% to S$3.8 million, but this is nothing alarming to me as the company has a history of growing free cash flow. I’ll be monitoring the free cash flow situation going forward to see if it bounces back.

Micro-Mechanics updated that it didn’t witness “any significant impact on our business from the COVID-19 situation”, except in Malaysia due to the movement control order (MCO), which resulted in a reduced level of operations for many of its Malaysian customers.

A Look at Micro-Mechanics’ Valuation

Micro-Mechanics has a share price of S$1.74 at the time of writing. At that price, its trailing twelve months (TTM) price-to-earnings (P/E) ratio is at around 18, with a five-year average of 13.

Micro-Mechanics may look expensive compared to its history. However, with its quality business, favourable long-term prospects, and a management team that’s forward-looking, I feel the company deserves a premium valuation.

I’ll end off with a telling quote from Borch (emphases from him) mentioned in Micro-Mechanics’ third-quarter FY2020 earnings release:

“When the pandemic is over, our goal is not to hope for life and business to just go back to normal. Instead, we want to absorb what we have learned, implement more fully some of the changes we made to adapt to changing circumstances, and better anticipate the challenges that lie ahead. In short, we see an incredible opportunity to go back to better.”

Why not check out the Seedly Community and participate in the discussion surrounding stocks like Micro-Mechanics (Holdings) Ltd (SGX: 5DD) and many more!