My First AGM: What Does $100M Gathered In ONE Room Look Like? My First AGM: What Does $100M Gathered In ONE Room Look Like?

So… You might be familiar with receiving these in your letterbox once a year: 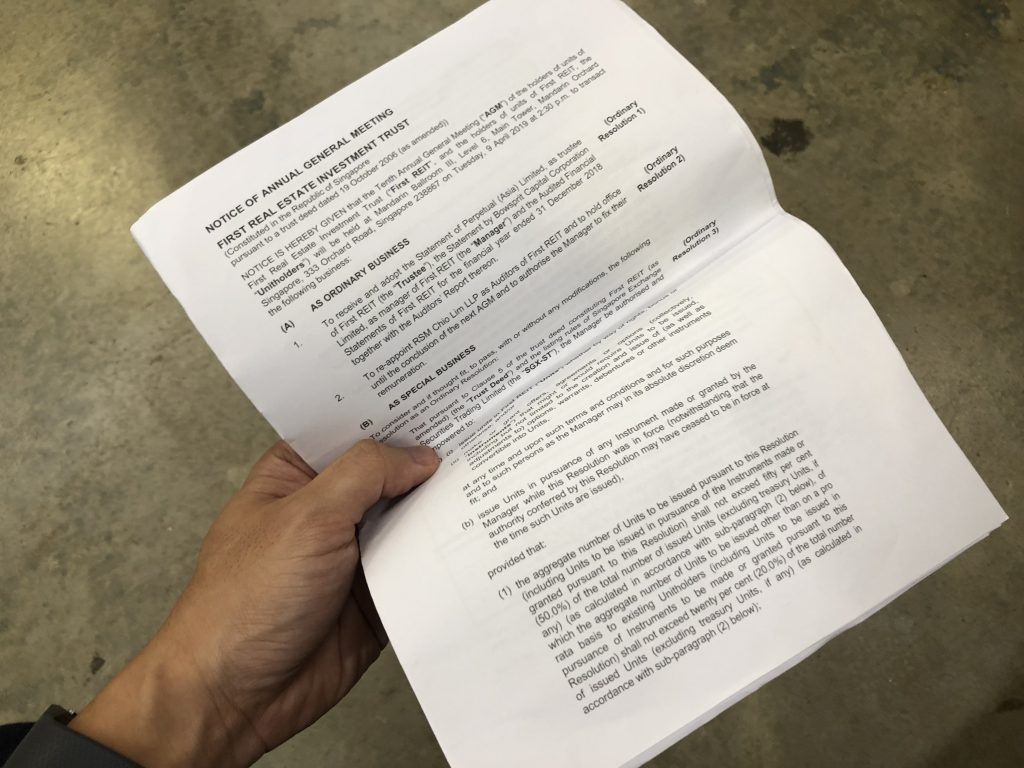 If you’re an investor like me, you’ll receive letters like this once a year. Or even a couple of times, depending on when a company’s financial year ends.

For the past three years at least, I’ve simply ignored these notices because the AGMs are always scheduled during work hours. Thankfully, I’ve been relying on the really helpful AGM summaries which The Fifth Person puts out, to stay informed.

Oh, and just in case you were wondering, AGMs are basically an opportunity for Unit-Holders aka shareholders to come together to get a yearly update on the business. It is also a platform where they get to question the Board of Directors and CEO on decisions made, or that they’re planning to make in the coming year.

TL;DR: Be Sure To Attend At Least ONE AGM To Experience It For Yourself

What Actually Happens At AGMs?

While looking at the Seedly QnA, I noticed that there was a question regarding how important it is as an investor to attend an AGM. Curious, I decided to have a look at the answers: Fresh off a Fifth Person Dividend Machines workshop where Victor and Rusmin shared the chaos that they witnessed during a particularly memorable AGM, I was intrigued and decided to finally attend an AGM myself.

Here are my learnings from my first ever AGM, after three years of being a retail investor in the market.

$100M Gathered In One Ballroom

If you want to see what wealth really looks like, just show up at an AGM to experience it first hand.

So, what does it look like? Well… It wasn’t a bunch of slick businessmen in suits.

In fact, I was surprised to see plenty of retirees dressed casually, with a cup of free coffee or tea in hand, and the Annual Report in another. Instead of chilling at the kopitiam, they somehow decided to spend their afternoon in a ballroom in Mandarin Orchard.

By the way here’s a quick glance of how the $100M was derived.

The company’s stock, of this AGM I attended, is currently valued at around $1 per stock. Assuming ALL the unitholders of the company’s stock showed up, that means that there’s a total of 100 million common stock in the room. And there were probably 300 to 400 people squeezed in the ballroom with me.

Here’re a couple of myths regarding AGMs, which is often spread amongst retail market investors:

Also, remember that movie Crazy Rich Asians? The real ones don’t actually look that glamorous. Here’s what they look like: 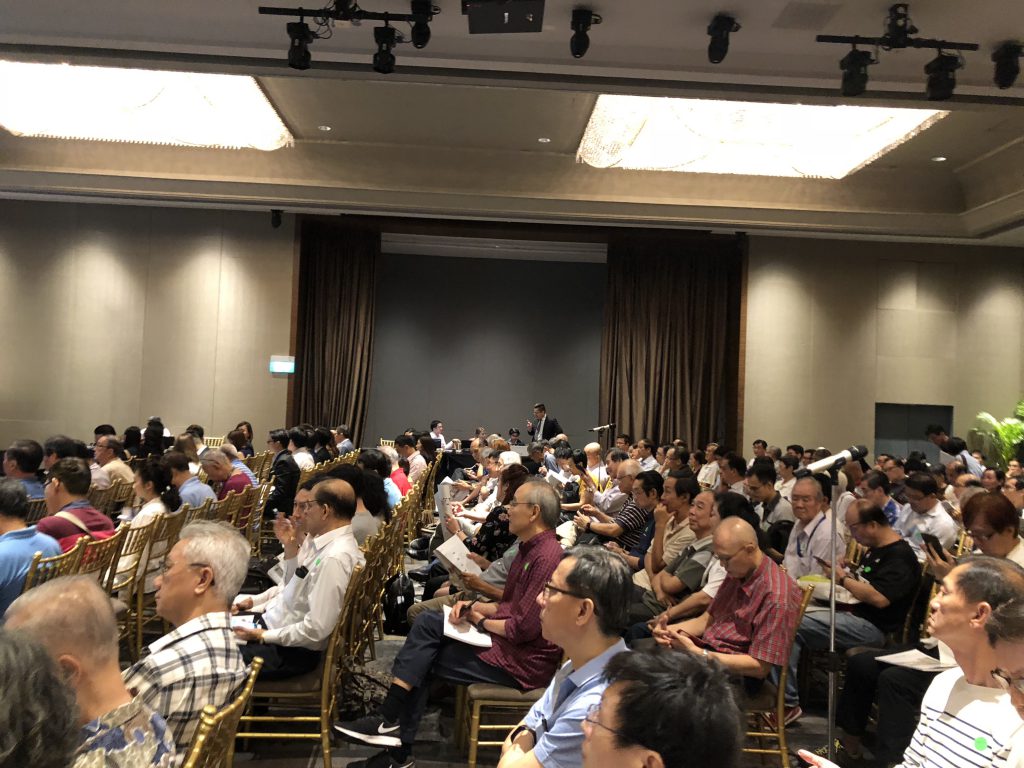 I knew that they were unitholders because as they were shuffling to their seats, I managed to sneak a peek at their mobile voting devices. FYI: you can see how much stock you own on those screens.

Seated on my left and right were two old uncles, who were probably in their mid-60s, and I noticed that they had about 400,000 to 500,000 shares each. That’s almost half a million dollars that they’ve each invested in this company.

My concluding thought: there’s a LOT of retirement savings sunk into this company.

Myth 2: People Who Attend AGMs Are There For The Buffet And Free Food

While outside the ballroom, I noticed crowds of people networking and discussing the Annual Reports of the company’s financial results for 2018.

Naturally, a queue formed at the bento box collection area when lunch was distributed.

But overall, food was not really a big draw. I could tell that these investors genuinely wanted to know more and learn about what’s the next step forward with regard to their investment.

Myth 3: There Will Be Drama And Lots Of Tough Questions Asked

“MAS is No God. Look at what happened to Hyflux!” quipped a silver-haired, obviously seasoned investor, when he was talking about gearing ratios as well as the MAS prescribed 45% ratio for the amount of debt each REIT could take up. There were also plenty of discussions regarding how the investors should count their perpetual bonds as part of the gearing ratio as well.

After the board of directors shared their decisions with regard to moving forward with an unpopular decision, another wizened, but sharp investor had this to say, “My message to the board is to remind EVERY ONE OF YOU, that YOU should care about US. The unitholders!”

Damn right they should.

Closing Thoughts: A Good Opportunity To Get A Sense Of The Company’s Management After the AGM, I believe that it’s a good way to measure how confident you should be with regard to your investment in the company.

Because ultimately you are ‘making your money work for you’ and the people that you see on stage are directly responsible for that. They are the one who are hired to help you multiply your money and also to ensure dividends are regularly paid out to you and me, the unit-holders.

An AGM is also where discussions can get quite heated. There are even times where the CEO will freeze up, which is a clear sign that the board’s direction or answers haven’t been received very favourably by the unitholders.

It’s also interesting to listen to the occasional mutters and grumbles of the various unitholders present during the AGM. Even though they might be slightly senior, but their combined experience is not something to be trifled with.

If you’re interested to read more about my first experience with an AGM, stay tuned as I’ll be back with a more in-depth article breaking down how to approach an AGM in Singapore.

A Nice Bonus: Taking Care Of The Unitholders 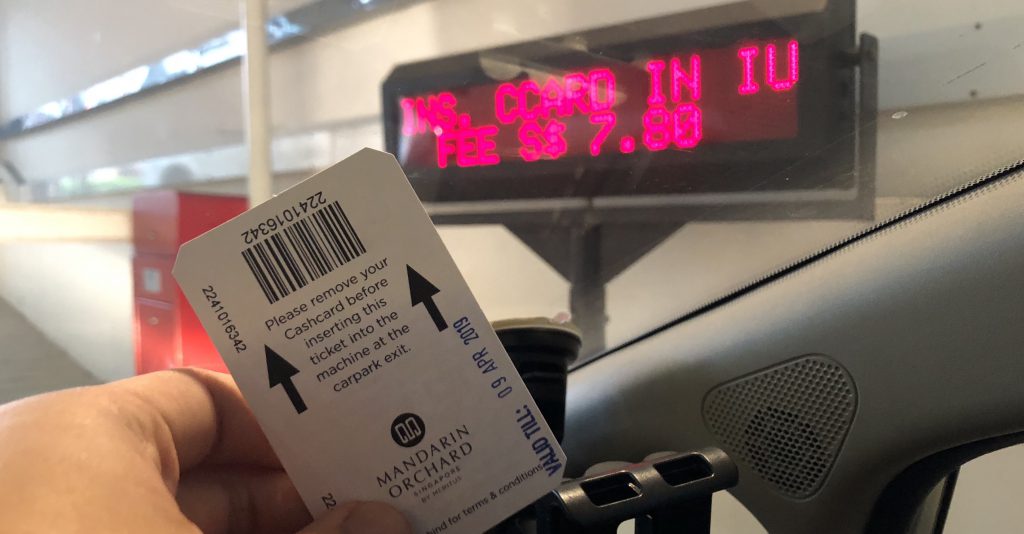 It was an afternoon well-spent and I highly recommend everyone to at least experience it once. For this AGM at least, I was lucky that all unitholders were also given a carpark coupon to redeem their parking.