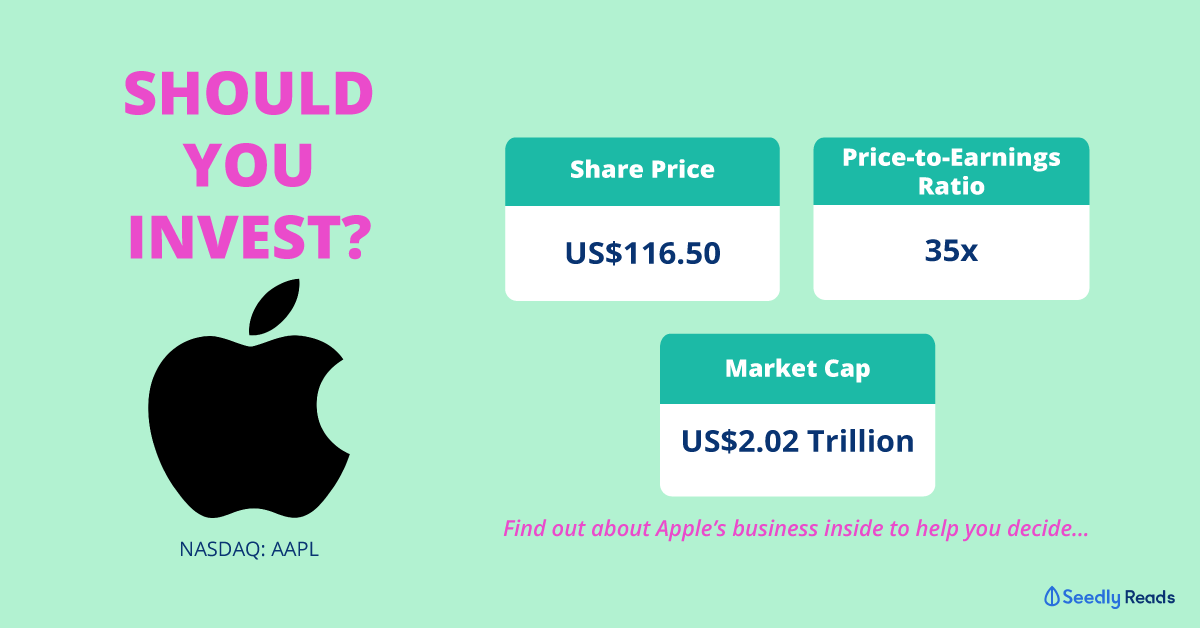 Just marvel at this wonder for a moment…

Apart from the iconic Singapore skyline, the dome-shaped structure floating on the Marina Bay water looks like an engineering genius.

That sphere belongs to Apple Inc (NASDAQ: AAPL) and is the company’s first Apple Store to sit directly on the water.

Just like how the technology company has broken new grounds, its share price performance has been nothing but extraordinary of late.

In August this year, it became the first US company to hit US$2 trillion in market capitalisation. Its market valuation is still above that at the time of writing on 6 October.

With its increasing popularity and relevance in today’s world, investors might want to get a piece of the action for the long-term.

However, they could also be wondering: “Is Apple stock is still worth investing in after its huge share price run-up?”

Let’s find out the answer to the million-dollar question (or should it be “trillion-dollar”?) by looking at its business and future prospects.

Here are some basic stats for Apple stock to begin with:

Apple split its stock five times since the company went public, with the latest being on a 4-for-1 basis at the end of August this year.

How Does Apple Make Money?

Apple products are ubiquitous; many of us might own one or would have at least used one of them.

It has two main business segments, namely, Products and Services. They can be broken down further:

iPhone, which revolutionalised the smartphone industry back in 2007, has been an important business driver for Apple.

How Has Apple Performed Financially?

Over the past couple of years, Apple’s revenue and net profit have grown, but not spectacularly.

In FY2019, revenue fell due to lower sales of iPhone, which was partially offset by a strong increase in sales of Wearables, Home and Accessories, and Services.

However, for Apple’s latest FY2020 third quarter, revenue grew 11% while diluted earnings per share surged 18% (both on a year-on-year basis) to new June quarter records. One of the drivers of higher revenue was, in fact, better iPhone sales.

This leads on to the most important question…

Is There Room for Apple to Grow Even More?

One of my favourite investing quotes comes by David Gardner, one of the founders of The Motley Fool:

When it comes to investing, it doesn’t mean that a stock hitting new highs cannot go on to hit new highs.

As mentioned in a previous article of mine, a stock that is selling near its 52-week high could mean that it has strong business prospects that the market is taking notice of.

After all, investors attain multi-baggers when a stock hits 52-week highs again and again throughout its holding period.

As for Apple, I believe there’s still room for business growth, which in turn would show up in the share price over the long-term.

The next growth driver for the iPhone looks to be those that can support the fifth-generation (5G) mobile network.

Several of Apple’s rivals like Xiaomi and Huawei have already rolled out their 5G phones.

Apple fans must be waiting eagerly for their company to roll out their own version to get their hands on it. During the September 2020 Apple Event, the highly-anticipated latest iPhone wasn’t announced.

Fresh off the press: Apple announced a special Apple Event to be held on October 13 at 10am Pacific Time (14 October 1 am in Singapore). This could be where Apple introduces its 5G-enabled iPhone 12 smartphones.

The new iPhones could bring new users to the Apple ecosystem, and lock them in with the suite of Services offerings, including the latest Apple One (coming later this year), the all-new Apple services bundle.

In the FY2020 third-quarter, Apple said that its active installed base of devices reached an all-time high in all of its geographic segments and all major product categories. With that, Services generated a June quarter record of $13.2 billion, up 15% year-on-year.

With more people using Apple products, the Services segment, which garners a high gross profit margin, can grow even more.

Interestingly, in the second quarter of 2020, Apple recorded a 5% increase in shipments in India while the overall market tumbled. The rise was thanks to better sales from iPhone SE, iPhone XR, and iPhone 11.

The online store offers Apple’s full range of products directly to customers across the country for the first time.

This new initiative might give Apple a boost and slowly take market share away from the Android market in the country.

According to Statista, Apple’s iOS only has a 3% market share in India. This shows that there’s plenty of room for the tech giant to grow in the world’s second-most populous country.

Having said all of that, no company is without risks. So is Apple.

One of the major risks with Apple is to do with competition, especially from local Chinese players.

For context, around 17% of Apple’s FY2019 sales came from Greater China, the third biggest market for Apple behind the Americas and Europe.

There’s also increasing scrutiny by governments on the big tech companies, including Apple. Even though Apple has not been that much under the lens compared to Facebook and Alphabet, there’s still the regulation risk.

At Apple’s current share price of US$116.50, it has a price-to-earnings (P/E) ratio of 35x, almost double its five-year average of around 18x. On a P/E-growth (PEG) ratio basis of close to 3x, it looks expensive as well.

However, market watchers might also argue that it could be worth paying up for a quality company, especially one that has a legion of fans locked into the Apple ecosystem.

What are your thoughts on the company?

Would You Invest in Apple Shares?

Why not check out the SeedlyCommunity and participate in the lively discussion surrounding Apple and more!