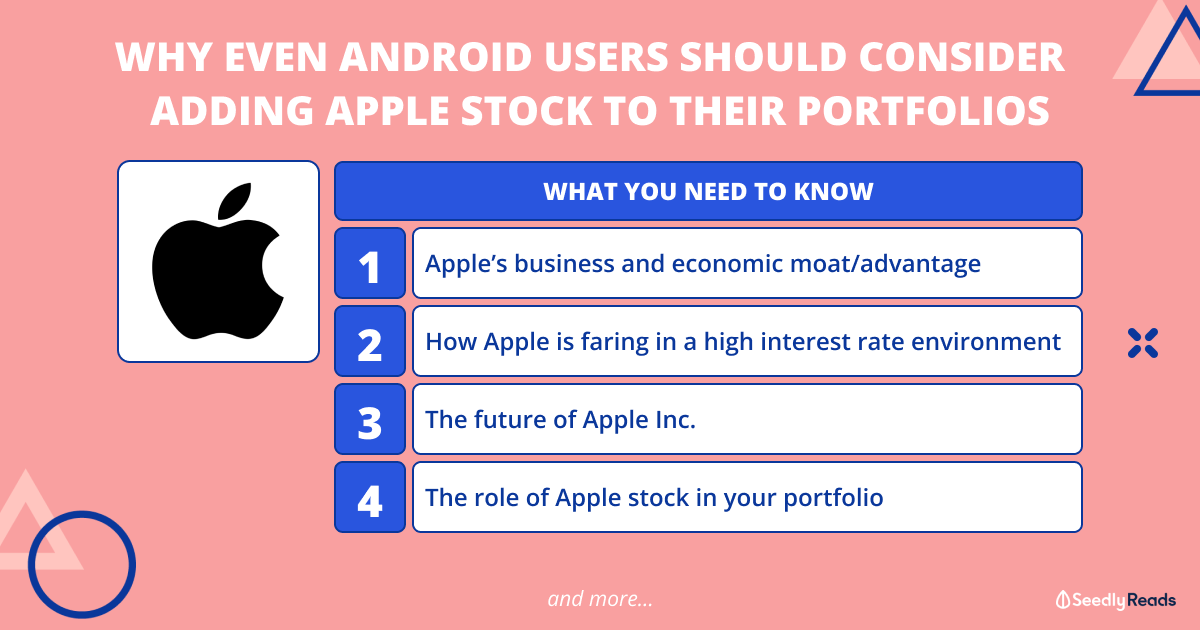 Before we start, let me say that I currently do not own a single Apple product and am a proud team Android person.

As a tech geek who prefers not to be tied down to one brand, Apple’s walled-garden ecosystem goes against my motto of “may the best device win, regardless of brand”.

So I’m as far away from an Apple fanboy as you can get.

Putting my personal lifestyle choices aside, my investor self knows that Apple Inc (NASDAQ: AAPL) is a beast of a tech stock to deal with and could play a vital role in your portfolio.

Or as your first stock as you start DIY investing in the U.S. market.

But with the largest market capitalisation in the world, many of us might be wondering…

How much further can Apple (and its share price) grow?

Read on to learn about Apple’s business, its future, and the role it can play in your portfolio.

TL;DR: Why You Should Consider Apple Stock In Your Portfolio

Risks of investing in Apple:

Why Should I Invest in Apple Inc (NASDAQ: AAPL)?

To start things off, here are some basic statistics you should know about Apple stock.

Apple has split its stock five times since the company went public, with the latest being on a 4-for-1 basis at the end of August 2020, making its share price really accessible when compared to the likes of Tesla (NASDAQ: TSLA), Google (NASDAQ: GOOGL) and Microsoft (NASDAQ: MSFT).

How Does Apple Make Money?

Apple is most well-known for the Apple iPhone, accounting for about 57% of its revenue in the first quarter of the fiscal year 2022 (FY2022).

Aside from that, Apple also produces a slew of other products and services, including the Mac, iPad, Apple TV, iCloud and more.

So what’s so great about Apple if there are other companies that do the same?

Well, Apple’s big advantage is in its ecosystem of products and services.

The Apple ecosystem is highly praised for its seamless integration and optimisation between devices, software and services.

In other words, Apple places a huge emphasis on its user experience, making its products really simple to use.

As the iPhone is the main driver of Apple’s success, let’s talk a bit about how the iPhone has built a cult-like following for Apple and retains its resale value better than any other phone.

With an iPhone in hand, you’ll be holding a phone that boasts quality and well-optimised applications, no bloatware and enhanced privacy controls compared to Android phones.

Moreover, the iPhone has the entire package with better retail support, a larger selection of accessories and tons of other Apple products that you can seamlessly connect with to complement your mobile companion.

If you’re invested in the Apple ecosystem, you can do things like unlock your Mac with your iPhone or easily switch devices while having all your files easily accessible at the touch of a button.

But of course, the whole “iPhone vs Android, Apple ecosystem vs the rest” debate deserves a whole other article on its own, so we’ll let the numbers do the talking.

Apple has consistently been in the top two smartphone makers along with Samsung.

Clearly, Apple still reigns as one of the top premium smartphone manufacturers globally.

Then again, Apple isn’t just about smartphones. So let’s take a look at the company as a whole.

Apple continues to have a strong balance sheet, with revenue increasing over the past five years.

This means that Apple is almost twice as profitable as most companies in the S&P 500 since Apple makes most of its products in-house.

Moreover, its free cash flow has reached US$92 billion, so it has more than enough to reinvest in itself and innovate new products or improve existing ones.

Despite the supply chain woes and the wake of rising interest rates, Apple has continued to perform in the first quarter of 2022, with revenue increasing 11% and net profit increasing 20% over the prior year.

The stock has also continued to perform while other tech stocks have struggled.

As a plus point, Apple does regular share buybacks that reduce the total amount of outstanding stock.

Assuming ceteris paribus, this will drive up the share price as supply drops.

With smartphone sales still being its main driver, Apple needs to remain competitive amidst the plateauing of smartphone technology.

In this aspect, it is really hard to say which company will dominate the premium smartphone market in the future.

A recent study by Consumer Intelligence Research Partners (CIRP) reports that 90% of iPhone buyers still plan to stick with Apple.

This is likely due to the walled-garden ecosystem that makes it hard for users to switch to Android and the luxury appeal that the iPhone has.

In addition, with the rollout of 5G, Apple is in the midst of an iPhone upgrade cycle, which could see many existing iPhone users buying a new iPhone with 5G capabilities.

Moreover, Apple still has a lot of room to grow in the budget category for smartphones, especially in markets like India and China.

Apple hopes to enter this market with the latest 5G-enabled iPhone SE.

On the flip side, it faces stiff competition from Chinese brands and government regulations.

The service business of Apple continues to grow with an all-time high of US$19.5 billion in revenue for Q1 ’22.

This is a 24% increase compared to Q1 ’21 and is a bullish signal that Apple’s services are becoming more widespread and poised for long-term growth.

AR, VR Headsets and the Metaverse

With more than 14,000 applications already on the App Store that bring Augmented Reality (AR) experiences to Apple users, Apple could just be the next major player in the Metaverse.

Broadly speaking, the metaverse is a collection of virtual worlds that focuses on social interaction.

According to third-party reports, Apple is developing a headset to tap into the metaverse space.

Assuming things go well and with the support of the Apple ecosystem, the company could potentially take a huge share of the pie in the Metaverse market, which is expected to generate nearly $829 billion in revenue by 2028.

Of course, not everything is a bed of roses for even a huge company like Apple.

With such a huge reliance on iPhone sales, detractors will argue that Apple is over-reliant on the iPhone and may lose its draw into the Apple ecosystem.

Another concern for investors is that Apple’s balancing act is getting trickier as the Chinese government cracks down on U.S. firms over security concerns.

There is a constant risk that China may just ban Apple entirely, which will take a significant chunk of its revenue away.

The Role of Apple Stock in Your Portfolio

With all that said, here’s how Apple stock could play a role in your investment portfolio.

For seasoned investors, Apple stock could be a great addition as it can serve to diversify, reduce risk and form the backbone of a growth-focused portfolio.

Newbie investors could consider Apple as their first stock pick in the U.S. market as it is seen as a safer stock.

Be that as it may, always do your own research before buying any stock and remember that past performance is not an accurate indication of future results.