Are the Rich Obliged to Donate Their Wealth?
27
shares 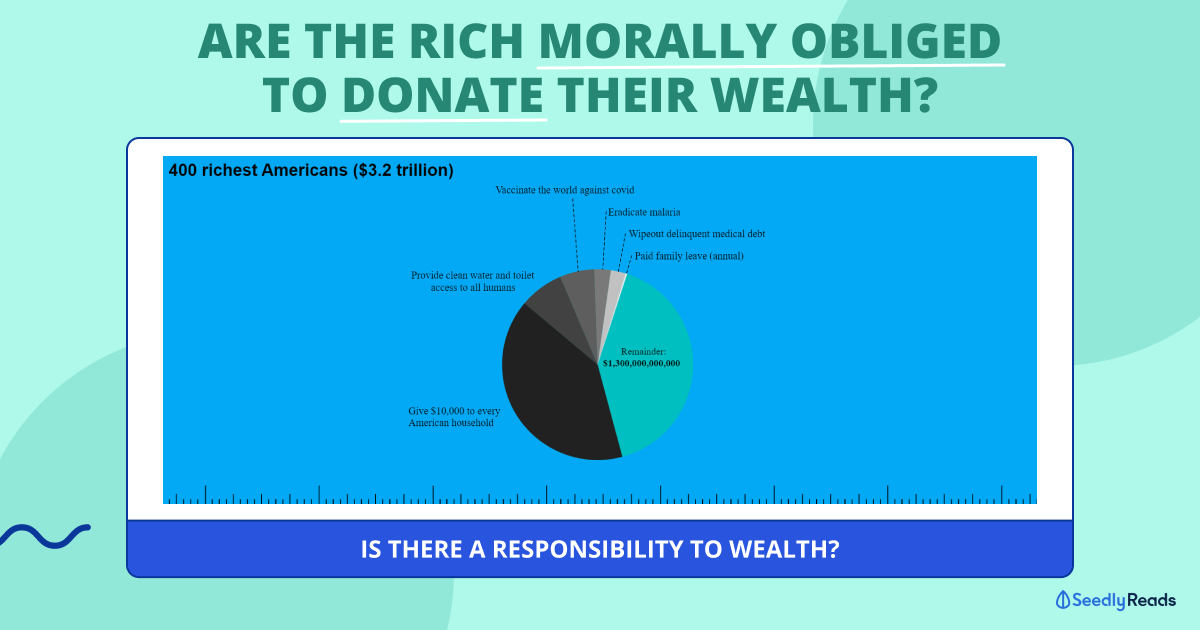 Are the Rich Obliged to Donate Their Wealth?

As my favourite comic book uncle once said:

Why Is Wealth Important in Society?

This statement applies to wealth as it has given the holder power for the longest time.

Fast forward to today, wealth is even more powerful as it can be used to buy influence.

With the advent of capitalism and globalisation, the gap between the rich and poor worldwide has only widened.

We only need to look at the latest World Inequality Report 2022, which found that income and wealth inequality remained extensive worldwide.

Startingly the wealth (valuable assets and items over and above income) gap between the rich and poor is vast as the poorest 50% of the world’s population owns just 2% of all wealth.

In stark contrast, the wealthiest 10% of the world’s population owns 76% of all the wealth.

With wealth inequality being so stark, that begs the question.

Do the super wealthy have a moral obligation to help the poor?

Do the Wealthy Have an Obligation To Help the Poor?

So here’s the thing. Money is not evil as it can be used for the betterment of human life.

But the love of money is the root of all kinds of evil. If you love money excessively, you will tend to be blinded and use all means to obtain it. This often leads to the oppression of the poor.

This leads us to the topic of the super-rich, the billionaires of the world who have money to last several lifetimes.

Is it really wrong to say that no single person will ever need or deserve this obscene amount of wealth?

What Are the Responsibilities of the Wealthy?

So the thing I understand is that with great wealth does come great responsibility.

However, there is no objective standard or definition for this responsibility.

Ultimately, each person’s attitude towards the creation, accumulation and spending of wealth is down to our cultural, social, religious (if any) and familial influences.

Thus, there is no real moral obligation for the rich to donate their wealth as each person’s philosophy and view of morality would be different.

Although there’s an argument to be made that if the wealthy obtained their money from the poor by, for example, selling essentials, they should share their wealth who those who made them rich.

What Does Philanthropy Mean?

That being said, Australian moral philosopher and the Ira W. DeCamp Professor of Bioethics at Princeton University Peter Singer’s moral argument for philanthropy and giving resonates with me.

FYI: According to Dictionary.com, Philantrophy is the altruistic concern for human welfare and advancement, usually manifested by donations of money, property, or work to needy persons, by the endowment of institutions of learning and hospitals, and by generosity to other socially useful purposes.

In the video embedded below, Singer highlights the points for his moral argument:

Singer argues that as humans, it is our duty to be helping other humans as he believes that every life has equal value.

As such, giving to charity is not benevolent. Instead, giving is our duty and not doing so is morally wrong.

Singer added that we have a moral obligation to help reduce death, disease, and poverty and to prevent hunger if we can.

In other words, being charitable will not make us better people, but not doing so would mean we miss the mark.

Breaking it down further, Peter Singer’s argument has a moral and empirical basis.

In terms of morality, Singer argues that if you have the means to stop something terrible from happening and do not have to sacrifice anything of equal moral importance, we ought to do so.

Empirically, an example would be to donate a certain amount of money to charity; if you do not need to give up something that is comparably morally important, you should do it.

To drive home this point, Singer used this Pond Case illustration. Let’s say you were walking in your fancy suit and luxury watch, and you see a child drowning in a pond. He argues that you should jump straight in and save the child at the cost of ruining your expensive suit and watch.

This is because the cost of your suit and watch is insignificant in light of the situation where you prevent a child from dying.

An excellent example of this would be the ultra-rich in America.

Github user Matt Korostoff created the website Wealth shown to scale, which visualises the wealth of the richest in America in a fascinating way and peppers it with poignant facts about the rich.

In one of the examples, Korostoff points out that even if the 400 wealthiest Americans give away 60% of their wealth, each of them, on average, would still have about US$3.25 billion left.

This money that they give away could:

Cons of the Argument

However, there Singer’s argument is not perfect.

Although there are good intentions, execution is important.

Giving to charity might be seen as hypocritical as it is a ‘convenient good’ that soothes our conscience but does not really address the systemic problems that perpetuate poverty and inequality. In the long term, this may even cause more harm than good,

What harm are we talking about?

Sometimes the money that is donated to charities may not be efficiently disseminated or even reach the beneficiaries. Some charities might spend too much on salaries, overseas trips and marketing.

In addition, there is corruption and questions about how foreign aid might even produce a positive economic outcome with their help.

The shoe company TOMS and the problems with their buy one give one model comes to mind.

Nevertheless, I would like to emphasise that a desire to help people is a good thing, but the execution is just as important.

What Are Your Thoughts About the Rich Being Obliged to Help the Poor?