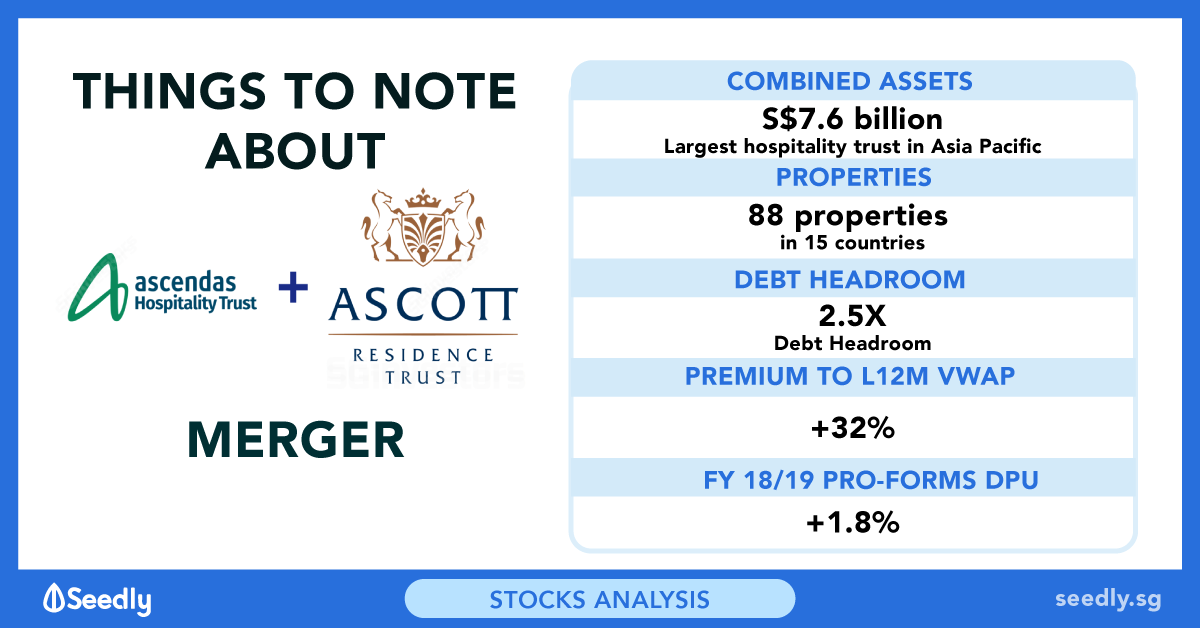 On 21 October 2019, through their handheld devices, shareholders from both sides gave their blessings to the marriage between Ascott Residence Trust (Ascott) and Ascendas Hospitality Trust (A-HTrust).

With combined assets of S$7.6 billion, the new entity – Ascott REIT Business Trust (Ascott REIT-BT) (SGX: A68U) — will form the largest hospitality trust in Asia Pacific and the eighth largest in the world. Ascott REIT-BT will be structured as a stapled security: a real estate investment trust and a business trust joined together. The news of the merger came on 3 July 2019 shortly after CapitaLand completed the acquisition of Ascendas-Singbridge on 1 July 2019.

In an open letter to A-HTrust earlier this year, Quarz Capital Management wrote that the merger will solve the critical issue of overlapping investment mandates between the two trusts. Should CapitaLand, their sponsor, sell its hospitality properties to Ascott or AH-Trust?

CapitaLand CEO Lee Chee Koon told shareholders in April: ‘There are various possibilities to resolve the conflict. One is, we go to shareholders to ask for a narrower mandate for each REIT. The second possibility is to sell one of them. The third is to merge the two.’ And he went with the third option.

AH-Trust’s portfolio of 14 hotel properties in Japan, South Korea, Singapore, and Australia will be added to Ascott’s family of 74 serviced residences worldwide for S$1.24 billion, creating a combined portfolio of 88 properties.

Ascott Reit CEO Beh Siew Kim said during the extraordinary general meeting that AH-Trust’s net property income earned through master leases and management contracts will continue to ensure stability of income to unitholders. She also sees a lot of potential opportunities in the Asia Pacific region which has a projected growth in international tourist arrivals of 5.5% annually from 2018 to 2023.

Key benefits of the merger

The benefits of the merger touted by management from both sides are similar. This is a fair deal that gives AH-Trust unitholders the advantage of size and financial strength to do larger and more lucrative deals that wasn’t possible previously.

A-HTrust CEO Tan Juay Hiang mentioned that an enlarged asset base gives unitholders more flexibility, increasing the debt headroom from S$400 million to S$1 billion — enough to grow through acquisitions or asset enhancements. Unitholders are no longer constrained by a smaller portfolio where the transformation of an asset or the shutting down of a hotel might cause them to lose a large stream of distributable income.

Ascott REIT-BT could also potentially be included in the FTSE EPRA Nareit Developed Index with a free float of S$2.4 billion crossing the index inclusion threshold of S$1.7 billion. This will result in higher trading liquidity for unitholders.

The main issue that AH-Trust unitholders had was the 0.7942 exchange rate that may cause them to end up with odd lots. The Ascendas Hospitality Trust management had raised the issue to optimize the cash-to-share ratio before the meeting but was declined by the authorities. At the same time, the management has worked with OCBC to offer a concessionary rate of 0.15% (with a minimum charge of S$15) per odd lot contract traded on OCBC Securities’ online trading platform for the period of one month commencing from the first date of trading.

If everything goes as planned after the approval of the resolutions, Ascott REIT-BT is expected to start trading on the SGX on 2 January 2020.

Why not check out Seedly’s QnA and participate in the lively discussion surrounding stocks like Ascott REIT (SGX: A68U) and many more!