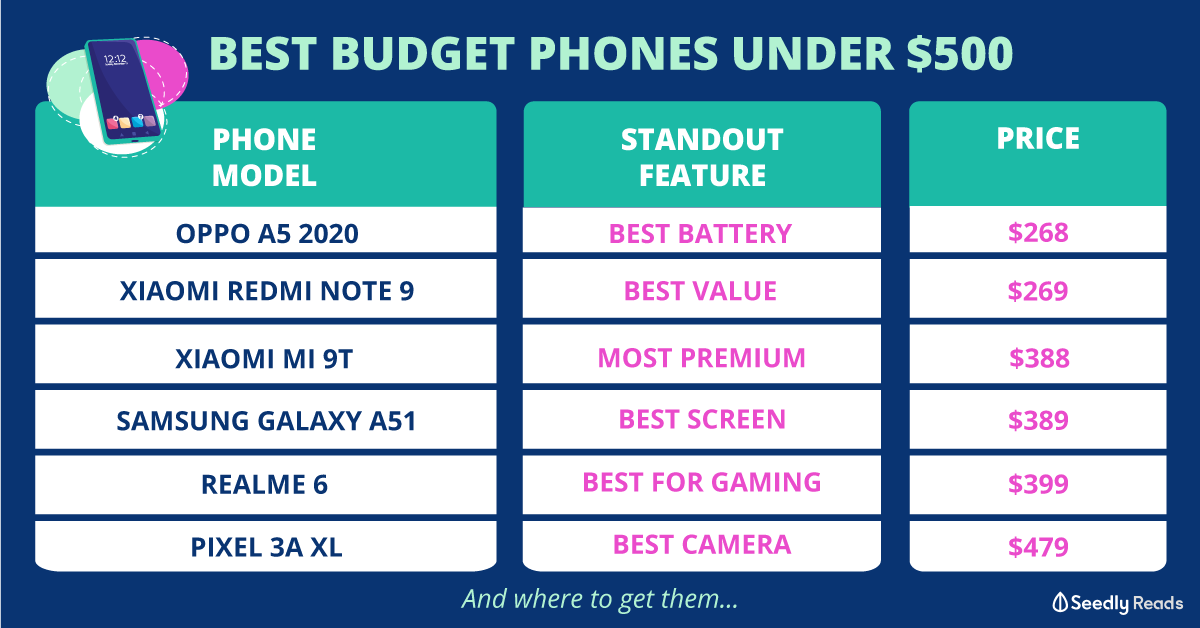 Phones are getting more and more expensive.

The premium devices from Apple, Samsung and other big phone manufacturers now cost a few hundred dollars more than just a few years ago.

In fact, just four years ago, the most expensive phone Samsung launched was the Galaxy S7 Edge with its $1,098 price tag. In comparison, this year’s Galaxy Z Flip was launched at $1998!

Thankfully, there is no need to sell your kidney to get a phone now. Cheap phones have become so much better.

Phone manufacturers are all fighting to make the best cheap smartphone.

Arguably, the cheap end of the mobile phone market is the most competitive price segment.

Manufacturers are doing their best to squeeze more features and specifications than their competitors while keeping the price of the phone low.

As such, there are a dizzying amount of options to choose from.

But at this price point, getting the balance right between price, performance and specifications is not easy.

We have created a guide to phones that aren’t just affordable, but also great for the price. They also have a signature feature that sets them apart from their peers.

Not to mention all of the phones are really affordable as we are using the $500 price as a cut-off point.

However, do note that these phones do not have certified dust and water resistance and wireless charging.

For just $268, Oppo is offering up a decent device.

This phone is a battery life champion due to its huge battery, an efficient processor and lower-resolution display which will last you well over a day.

Despite its price and plastic back, the phone is still pretty nice looking and comes in Space Purple and Marine Green.

The phone also features quad cameras, but their actual performance is not that good. At this price, you will also have to compromise with the slower Snapdragon 655 chipset.

But overall, the phone delivers a great experience as Oppo has made smart compromises on this device that do not affect the phone that much.

Next up we have the Xiaomi Redmi Note 9.

Xiaomi has made a name for themselves for their great hardware at affordable prices and the Redmi Note 9 is no exception.

For just $269, Xiaomi has created a great budget device.

It’s difficult to find many other phones than can offer what the Redmi Note 9 does at this price.

The Redmi Note 9 has a stylish modern design. Although the phone has a plastic back, the phone still looks quite premium. Not to mention the phone would be more durable than phones that are made mostly of glass.

The phone comes with a vibrant full HD LCD screen with almost no bezels and a punch hole at the top left-hand corner.

The phone’s processor is no slouch either, with a capable MediaTek Helio G85 with 4GB of ram that would deliver performance.

As for the cameras, there is a quad-camera setup that is decent but it could be better.

The main downside at this price is that the Xiaomi MIUI software skin on Android 10 is not the best and tries to push software services to you on the phone. Another thing downside is there is no NFC for this phone.

If you can live with this. you will be happy with what you get at this price. Do try out the phone’s software or take a look at MIUI reviews on YouTube before deciding.

When making a list like this, it is hard to avoid Xiaomi. But there is a compelling reason why I have included the Xiaomi Mi 9T on this list.

Just take a look at that gorgeous full-screen display which makes the phone looks so much more premium than phones that cost a few times its price.

For just $388, Xiaomi has created a premium device on a budget. Sure, there are a few compromises at this price, but the overall experience is not too far away from phones that cost many times more.

As for the design of the phone, the Xiaomi Mi 9T has a full glass body with glass on the front and back of the phone.

It’s crazy that this phone sells for the price it does as the near-flagship specifications ensure fluid everyday performance, while the AMOLED screen found in more expensive phones looks quite decent as well.

The cameras hold up pretty well as you get three different zoom focal (zoom) lengths with decent performance.

However, the cameras are not as good in low light.

Plus, the Xiaomi MIUI software skin takes getting used to and tries to push software services to you on the phone.

If you can live with this, you will be very happy with what you get at this price as it offers you a flagship experience at a fraction of the price.

The phone also recently received an update to the latest MIUI 12.

Next up with have a Samsung device.

Fun fact, Samsung actually makes the screens for the majority of the phones on the market. Even Apple, their closest competitors use Samsung OLED screens for their iPhones.

Arguably Samsung makes the best OLED panels for smartphones and they usually reserve the best for their own smartphone line.

Even though the Samsung Galaxy A51 is a budget device, it benefits from having a Samsung Super AMOLED screen as well.

For just $389, Samsung has created a near-flagship device for cheap.

Many of the features from their more expensive flagship phones like the in-display fingerprint have trickled down to the Samsung Galaxy A51. The design is pretty nice as well, even though it has a plastic back.

The highlight of the phone would be the bright and vibrant 6.5 inch Super AMOLED screen that will elevate your Netflix viewing experience.

The cameras also hold up pretty well as you get three different zoom focal (zoom) lengths with decent performance.

However, the phone’s processor is not the best for gaming although it is fine for everyday use.

It is a perfect phone for casual smartphone user who does not play graphically intensive games on their phone and does not care too much about performance. The phone is a great media consumption device and the cameras are rather decent for the price.

Next up with have the Realme 6, the best phone on this list for gaming.

If you play graphically intensive games like Fortnite, PUBG and more, this phone is for you.

For just $399, Realme has created an affordable smartphone with a high refresh rate 90Hz IPS LCD display with 120Hz touch sampling rate that is great for gaming.

Typically, your phone has a 60Hz display which is how quickly the display updates the image on the screen.

The phone also features an AI quad-camera systems on the back, with a wide, ultrawide, macro and depth cameras.

Another standout feature of this phone is that it supports 30W VOOC Flash Charge.

Realme claims that the phone will charge up to 100% in 55 minutes. This is really convenient as you will have to spend less time on the charger and more time using the phone.

We are mentioning these features as they usually only appear in phones two or three times the price.

As for the design, the phone has a clean modern look that comes in either Comet Blue or White.

But do note that the phone has a plastic back.

What makes the phone great for gaming is its high refresh rate screen and powerful MediaTek Helio G90T.

According to GizmoChina, the MediaTek Helio G90T is a graphics beast for the price as:

“According to leaked AnTuTu tests, MediaTek Helio G90T reached a total score of 281,033 points. That is simply amazing and it is very close to flagship chipsets. Further, it is a way better result than Snapdragon 730G which just reached 220,000 points.” … “The Adreno 618 GPU on board of the Snapdragon 730G scored 66,398 points on AnTuTu, while Helio G90T scored 79,755 points.

The phone also comes with 8GB of ram as well.

However, the phone does not have NFC.

In other words, you can expect games to run excellently on this phone and the phone to run super smoothly for everyday use.

Last but not least, we have the Pixel 3a XL and here are its specifications.

Simply put, it has the best smartphone camera in this price range and even competes with phones two or three times its price.

What Google has done was to essentially transplant the Google Pixel 3’s camera into the Pixel 3a.

Even The Verge, a technology news media outlet notorious for its strict evaluation of cameras has stated this in their Pixel 3a review:

I am not sure if I’ve ever been able to write the following sentence: a $400 phone has a camera that’s among the best you can get on any smartphone.

As a Pixel device, the phone benefits from running a clean version of Google’s software which elevates the experience of using the smartphone.

As for the design, it looks a bit dated with the large bezels on the front and matte plastic back. However, the phone is nice and small which makes easier to handle. If you want a smaller device, you can consider the Google Pixel 3a.

The phone is not perfect either.

If you are coming from a premium phone, you will notice that everything is just a bit slower.

Opening up apps take a fraction of a second longer, pictures that need heavy processing like HDR or portrait mode will be slower too.

Unlike the other phones on this list, the camera only has one lens. Storage is also limited with only 64GB of storage and no option to expand the storage with an SD card.

Also, the Pixel 4a will be released later this year as well in about June or July according to rumours

However, despite the compromises, the phone still delivers a great experience. If you want one of the best cameras in a phone for a great price the Pixel 3a is best for you.

$479 on Shopee with one year Google Singapore Warranty

Check out our SIM-only mobile plan comparison tool to get the most affordable plans to go with your new phone!