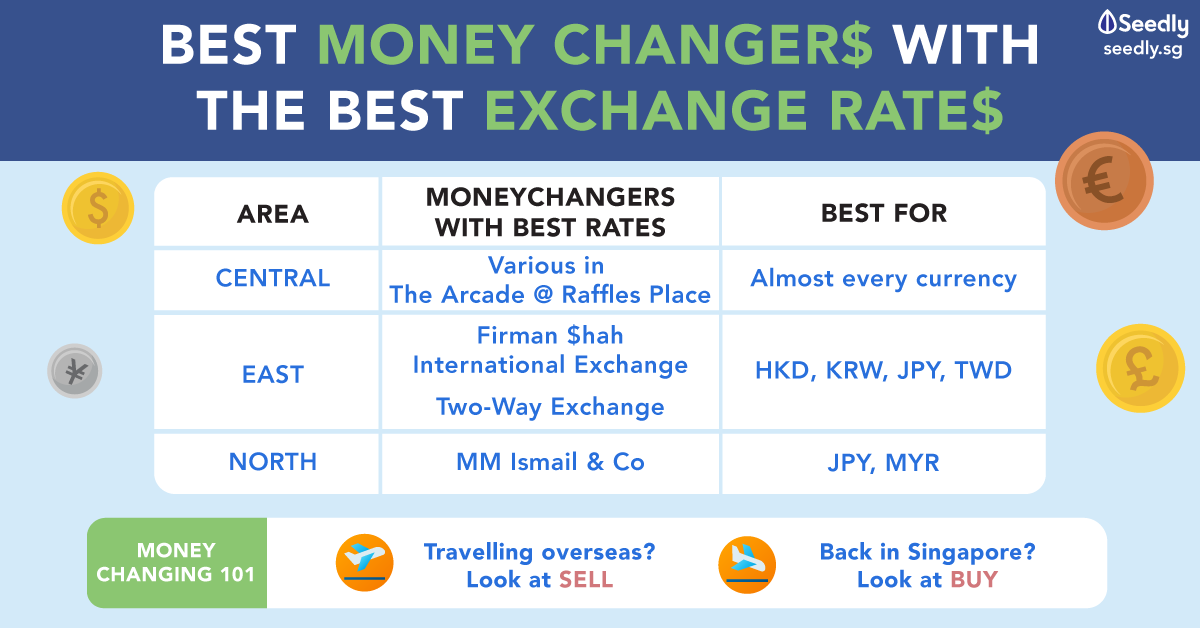 After booking your flights and accommodation, the next brain-draining task is probably changing money.

You’re probably wondering where is the best money changers in Singapore? And which one would give me the best exchange rate…

Look no further as we got you.

Disclaimer: we’re not sponsored in any way, we’re just recommending platforms which we find to be the most useful in finding the best money changers who give the best exchange rates!

The Best Money Changers In Singapore With The Best Exchange Rates

When we asked the ever-helpful Seedly Community where is the best place to change money, here’s what we got:

The recommendations are great, but we decided to do a little bit more research to try looking for money changers all over the island.

We used the following currencies (we conducted a poll amongst the Seedly team on which are the most popular currencies) to compare rates:

And narrowed down the top 3 money changers which give the best rates for the above-listed currencies:

Here’s what we found out:

1. Buy Or Sell? Which Column Should I Be Looking At?!

The most commonly asked question that most of us have is: “Which column should I be looking at? Is it the ‘Buy’ or ‘Sell’ column?” 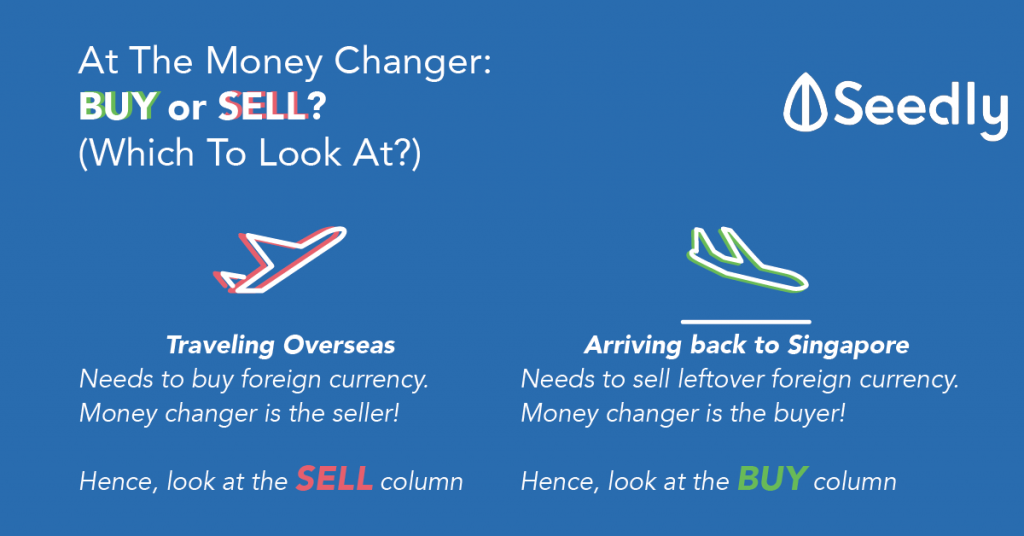 Well, here’s a very simple exercise to help you:

2. Is A Higher Or Lower Exchange Rate Better For Me?

If you are travelling overseas and want to buy foreign currencies then a higher exchange rate is better. This means we can get more foreign currency in exchange for our SGD.

If you just came back from overseas and want to sell your extra foreign currencies then a lower exchange rate is better. This means our foreign currency is worth more and that gives uyus more SGD back!

3. How Do Money Changers Earn Money?

They earn through the bid-ask spread, which is the difference between the buying and selling price of a currency.

Assuming the exchange takes place in America, the base currency would be in USD.

Emily is an American returning from Europe and wants to sell her leftover EUR. She sells 1000 EUR and gets back USD$1,100.

The difference of USD$100 here is the bid-ask spread and is the profit which the money changer pockets.

4. Why Are Some Money Changers Able To Give Better Exchange Rates?

It all boils down to supply and demand.

Have you ever walked into the Arcade at Raffles Place during lunchtime?

The number of money changers packed into that place and the number of people looking to change money is mind-boggling.

For money changers in busy locations like the Arcade, Mustafa, or People’s Park Complex, the only way they can stand out amongst the competition is to provide the most competitive rates as possible.

5. When Is The Best Time To Change Money?

Besides the obvious fact that EVERYBODY will be changing their money on the weekends as they were too busy to do it on a weekday due to work or other commitments.

The Foreign Exchange (forex) markets are opened for 24 hours a day from Monday through Friday, but they’re all closed on the weekends.

So whatever exchange rate that the money changers work with would be the last available quote on Friday.

When the markets re-open on Monday, there’s a chance that the currencies might open at higher or (even) lower rates.

In order to mitigate this, the moneychangers will factor in a slight mark-up and the resultant exchange rates would be a little worse than what you should be enjoying.

No hard feelings ya? It’s all business.

You can monitor the exchange rates month-on-month and compare it against the prevailing 1-year average exchange rate for whatever currency you wish to change your SGD to.

It’s a little like buying stocks during a market correction.

What Can I Do With Leftover Foreign Currency?

One major problem that comes with travelling is leftover foreign currency.

Especially if it’s a country which you’re probably never going to visit again.

If you don’t want to sell it to the money changer, you can always try a p2p platform like Marco Polee which allows you to connect with other travellers who’re looking to buy the currency which you wish to get rid of.

Best of all, there’re no hidden fees or commission, and you can always arrange a meetup at your convenience.

Simply put, it is like a Carousell but for foreign currencies.

How awesome is that?

Are There Any Alternatives To Physically Going Down To Change Money?

If you don’t have time to queue at The Arcade, you can always try Thin Margin.

It’s a 24/7 service which allows you to order currencies online and have it delivered right to your doorstep.

If you’re thinking that it’s too good to be true, they’re licensed by the Monetary Authority of Singapore (MAS) and the Singapore Tourism Board (STB).

Pro Tips On How To Find The Best Exchange Rate

Here are a couple of tools which you can use to find out which money changer gives you the best exchange rate:

All you have to do is key in the currency you want and the site will list the money changers with the best rates.

Rates are updated regularly and can even be sorted based on area so you can find the closest money changer to you.

It’s kind of like CashChanger, except that it allows you to book a currency rate with the money changer of your choice.

That’s very helpful if you managed to secure the best exchange rate but can’t head down immediately to change your money.

Do you have any tips when it comes to changing money and getting the best exchange rates? Feel free to share them below!