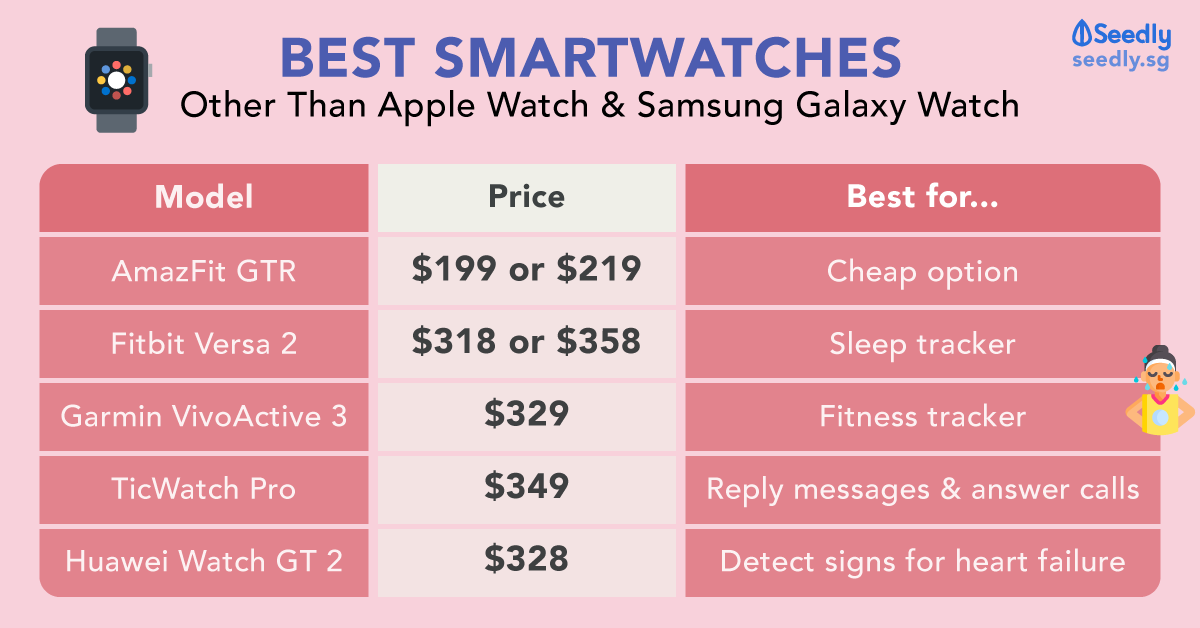 Everything is about speed and convenience nowadays.

We’ve become so reliant on our mobile devices and with the introduction of smartwatches, our lives just got so much better.

While I haven’t jumped on the smartwatch bandwagon yet and I’m hoping that writing this article will help me make a decision. I’m not going to bore you with an in-depth comparison of the specifications, but instead, I’m going to highlight a few prominent features.

Why Would I Want A Smart Watch?

There are so many reasons why people will want to get a smartwatch, but the few below should be good enough to convince anyone.

That on its own is a pretty good reason why so many are using smartwatches since you are dealing with at least one less device on a daily basis.

Besides, it’s helpful when you need a hands-free solution if you’re clumsy like me, or just holding too many things, and saves you the trouble of having to get your phone out from your bag or pocket.

Possibly the most important feature for most, smartwatches keeps you updated with the feature to receive notifications. Some even allow you to reply to messages and answer calls directly on the watch!

Of course, your smartwatch will never replace your smartphone, but there are situations where it might not be convenient for you to check your phone.

Say, your first date with a really interesting individual?

Then again, checking your watch might make you look impatient… Sorry, can’t really help you ther.

To be honest, I’m super slow when it comes to replying messages as I treasure quality time with whomever I’m meeting and alone time.

Introducing a smartwatch means I can manage and prioritize my notifications between my smartwatch and phone, in a way providing the least amount of distraction but still staying updated.

There are limited smartwatches with the cellular connectivity feature, but it’s not really a dealbreaker too.

Having the cellular feature simply means that you can still use the smartwatch for getting notifications even if you’re nowhere near your phone.

I’d think this feature is mostly useful for people who run or do more outdoor sports since it can be troublesome to bring our phones along with us.

Having recently started exercising more frequently to stay healthy, this is by far my favourite feature.

You can now monitor your heart rate, track the distance and speed for your outdoor sports and even track your sleep cycles, all with your smartwatch!

Many smartwatches nowadays can also track a range of activities apart from just running.

Of course, no one’s stopping you to just buy a regular fitness tracker if that’s all you’re looking for.

But if I’m already investing in a piece of device, I’d want it to have the best features possible. Sounds about right?

Apple Watch was my dream for the longest time until I joined #teampixel. Are we gonna get a Pixel watch?

Well, also because of the price tag, duh. I mean, prices start from $599, and that’s for the smaller and basic versions for the latest Series 5.

Of course, if you’re not after the latest models, you can also get the Series 3 starting from $299, for the basic version!

While I’ve been told that there are ways to connect your Android device to an Apple watch, I simply can’t justify the price tag since I’m not a super busy businesswoman, nor do I exercise every day.

On the other hand, a Samsung Galaxy Watch will cost you upwards of $398, not as pricey compared to Apple Watch.

But the voice control feature, Bixby, hasn’t been the crowd favourite and you have limited apps to use since it runs on its own Tizen operating system.

While there are many different brands and models available, I chose to compare the best smartwatches for general usage.

One of the best alternatives to Apple Watch and Samsung Galaxy Watch, without breaking the bank too much, is the AmazFit GTR.

Similarly to other AmazFit watches, you are limited by AmazFit’s apps only and you won’t be able to customise the watch face.

So if you’re big on being able to change how your watch looks, this might bug you a little.

One thing I’m pretty impressed by is the battery life, which can potentially last you 24 days with normal usage of the above features as shared by other users!

Anyone wants to get this for me so that I can verify the battery life for you?

Another consideration though is that the AmazFit is technically not a smartwatch.

Even though it has been discussed all over as a smartwatch, it only receives notifications, but you can’t actually reply messages or answer calls.

That’s fine by me though, for I’m paying a fraction of the price, and honestly, I don’t really want to be seen speaking to my watch.

Plus it doesn’t have the cellular feature, which means you’ll only be getting notifications if your phone is near your watch.

It has most of the basic fitness features that you need in a smartwatch, including 24-hour heart rate monitoring, a smaller range of activity tracking and sleep monitoring.

Known for their fitness trackers, Fitbit also has a pretty affordable smartwatch range.

With a similar design to the Apple Watch and a prettier version compared to the Ionic, be prepared to pay $318 or $358, depending on your preferred watch band.

Good news ladies! A 40mm watch face should be okay for us, right?

Likewise, Fitbit uses its own operating system, but common apps are compatible, so all’s good.

The Fitbit Versa’s battery life ain’t that bad though, given that it can last you about 5 days with general usage.

Similarly, if you’re being strict technically, Fitbit Versa is not considered a smartwatch since it does not allow you to answer calls as well.

Apparently, it allows you to reply to messages using your voice if you’re an Android user.

Even at this price, we don’t have an option for a cellular version, so phone’s gotta be with you if you want to stay updated.

Well, coming from Fitbit, something will be wrong if they didn’t have the basic fitness features, which includes tracking of more than 15 activities and water-resistance.

Fitbit Versa also has one of the best sleep trackers if you’re highly concerned about your sleep quality.

But the lack of GPS is one major drawback for runners because it means that you’ll still need to bring along your phone to track your run through the Fitbit app.

Another brand that’s known for activity tracking, the Garmin VivoActive 3 Element will be taking $329 from you.

With only one size available in Singapore, again, the 44mm watch face may be more suitable for the guys. Sigh

Garmin runs on its own operating system but it still works with the typical fitness apps through Connect IQ.

The battery life isn’t the best, however, lasting about 3 days on regular usage.

Again, it’s technically not a smartwatch since you’re only receiving notifications, but you get the gist, it’s always been known for fitness.

Same issue here, keep your phone close to get notifications since there’s no cellular feature.

Well, since it’s known for activity tracking, you wouldn’t expect the basic fitness features to be lacking.

Along with sleep monitoring and more than 10 activities for you to track, it’s also pretty water-resistant.

Unfortunately, Garmin’s sleep monitoring is not the best, so do take note if you’re particular about this feature.

A smartwatch that I’ve only heard once or twice about, only because my partner is tech crazy, do prepare $349 if you’re looking to get one.

Need I say more, with a watch face of 45mm, I guess you ladies will be giving it a pass.

TicWatch uses Android’s Wear OS, so you’ll definitely have access to the Android features I love.

But one thing to note though, Wear OS doesn’t have the best reputation in the smartwatch market.

Said to last 30 days in Essential Mode, the TicWatch Pro will potentially last you 5 days with regular usage.

While it seems like the cellular version is not available in Singapore, at least you’ll be able to reply messages and answer phone calls!

Ahem, this is the only one in the list that doesn’t have sleep tracking…

Yea, even Huawei has smartwatches too and you’ll need $328 before you can get your hands on it.

While there is a smaller 42mm and larger 46mm version, it seems that only the larger one is available in Singapore at the moment?

Similarly, Huawei’s running their Watch GT 2 on its own operating system so there might be some lesser applications available.

With regular usage, you should be able to get about 30 hours out of the battery life.

Unfortunately, you’re also limited to receiving notifications from your phone only, and there is no cellular version available as well.

You know what I’m going to say by now…

An interesting feature is that it can monitor and detect early signs of bradycardia (a.k.a. low heart rate) and heart failure, or so Huawei claims.

Are you using any of the above smartwatches?

Or most importantly, are you keeping fit?

Remember, you can buy as many health insurances as you want, but it’s also up to you to stay healthy!