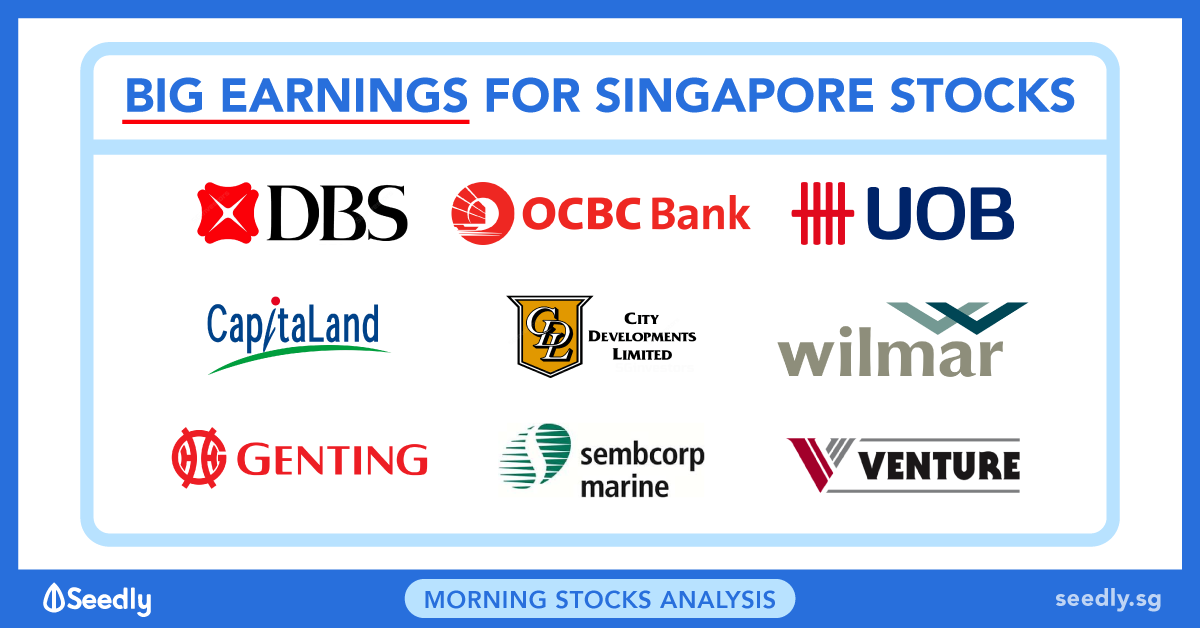 For our Morning Stocks Analysis, the Seedly team worked closely with MotleyFool, who is an expert in the field, to curate unbiased, non-sponsored content to add value back to our readers.

It’s a big week for earnings with Singapore’s three big banks and two giants from the property sector set to report.

Geopolitical and economic headwinds had no impact on third-quarter results at DBS Group (SGX: D05). However, Singapore’s biggest bank did miss market forecast when it posted numbers in November.

But OCBC (SGX: O39) topped forecasts when it reported a 12% jump in third-quarter profits. That was thanks to a rise in net interest income as a result of growth in customer loans.

UOB (SGX: U11) also chimed in with a surge in quarterly profits last time. Earnings climbed 14% on strong loan growth and an improvement in net interest margin.

In November, CapitaLand (SGX: C31) reported a 13.6% rise in third-quarter profits. The property developer said it had benefitted from contributions from investment properties in Singapore, China and Germany.

Not to be outdone, City Developments (SGX: C09) said third-quarter profits climbed 10.4% on a 17.7% jump in revenues. The company said their performance was underpinned by property development from both local and overseas projects.

Wilmar International (SGX: F34) said in November that it expects most of its operations to continue to do well in the fourth quarter. In the third quarter, the farmer said profits rose 10.7% thanks to better performances at its tropical oils and oilseeds and grains business.

There are also results from:

Indonesia’s central bank will announce its latest interest-rate decision on Thursday. It is unlikely to cut its benchmark rate from 6%. But it could provide more liquidity.

Thailand will report its economic growth rate for the final quarter of 2018. In the third quarter, its gross domestic product grew 3.3% year on year. It was the weakest growth rate since the fourth quarter of 2016.

And finally, Singapore will report inflation numbers for January. In December, the annual inflation rate was 0.5%.