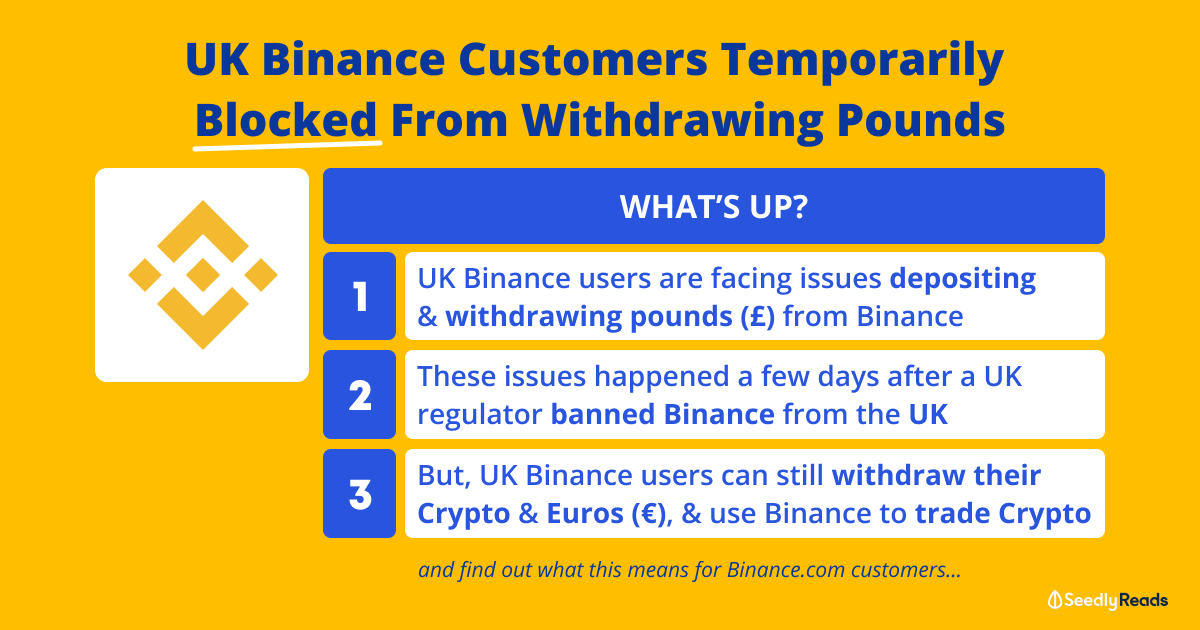 Just this morning, the Financial Times (FT) reported that Binance.com customers in the U.K. have been temporarily blocked from withdrawing pound sterling from their Binance.com accounts.

This temporary outage happened just a few days after the U.K. financial regulatory body the Financial Conduct Authority (FCA) ruled to block Binance, the largest Cryptocurrency exchange in the world by volume from operating any ‘regulated activity in the U.K..’

As the story is still developing, we will update the article if there is any new information.

On Monday (28 June 2021) the FT reported that U.K. Binance.com customers could not use Faster Payments (popular U.K. payments network that enables transfers between the U.K.’s banks) to withdraw and deposit pounds from the Cryptocurrency exchange.

The exchange cited that this was due to ‘maintenance.’

This was not the end of it as on Tuesday (29 June 2021), Binance added that it had suspended its U.K. customers ability to withdraw and deposit pounds using bank cards due to ‘maintenance as well.

However, according to Binance, the Faster Payments withdrawals service was resumed later that afternoon.

But as of 5.50pm London Time on Tuesday (12.30am Singapore Time on Wednesday, U.K. Binance customers were not able to make withdrawals with their bank cards and deposits with Faster Payment and bank cards.

Despite this temporary withdrawal outage affecting the deposit and withdrawal of pounds, it is important to note that U.K. Binance.com customers could still withdraw their money to their accounts using Euros.

What is Binance UK Ban Really About?

This temporary outage occurred shortly after the FCA moved to ban Binance from conducting any regulated activity in the U.K.

In addition, the FCA put up this notice on its website stating that:

The FCA’s consumer warning then proceeds to warn consumers about the risks of investing in Cryptocurrencies.

This ban scuppered Binance’s plans to launch its own Cryptocurrency asset marketplace in the U.K., making Binance one of many Cryptocurrency companies that withdrew their FCA applications to operate in the U.K. as they did not meet anti-money laundering requirements.

In addition, another possible reason for the ban can be seen from the FCA’s notice:

‘While we (FCA) do not regulate crypto assets like Bitcoin and Ethereum, we do regulate certain crypto-asset derivatives, such as futures contracts, contracts for difference and options, as well as those crypto assets we would consider securities.’

It is possible that Binance was targeted due to its futures in margin trading as the FCA is traditionally against leveraged high-risk trading and not Cryptocurrencies per se.

How Does This Ban Impact Binance.com Exchange Customers?

However, an FCA spokesperson interviewed by CNBC clarified that ‘the scope of the ban was limited.‘

After all, the FCA’s ban will not prevent Binance’s U.K. customers from buying and selling Bitcoin and other Cryptocurrencies on the main Binance.com exchange as Binance is domiciled in the Cayman Islands where regulation is notably laxer.

The FCA’s Binance ban is not the only instance of increased regulatory scrutiny.

For example, in Ontario, Canada, Binance announced that it will no longer be operating in the province after the Ontario Securities Commission (OSC) cited Binance and a few other Cryptocurrency exchanges for a failure to comply with its regulation.

In addition, Japan’s Financial Services Agency (FSA) recently took to issue another warning Binance (the second warning in three years) that the exchange is running its business in Japan without the FSA’s permission.

But on balance, my opinion of this increased regulation is that governments around the world are recognising that Cryptocurrencies are here to stay.

As such, these regulators around the world are moving to clarify what they will or will not allow. Undoubtedly, different countries will have different stances on Cryptocurrency.