Should You Invest in Bitcoin?
167
shares 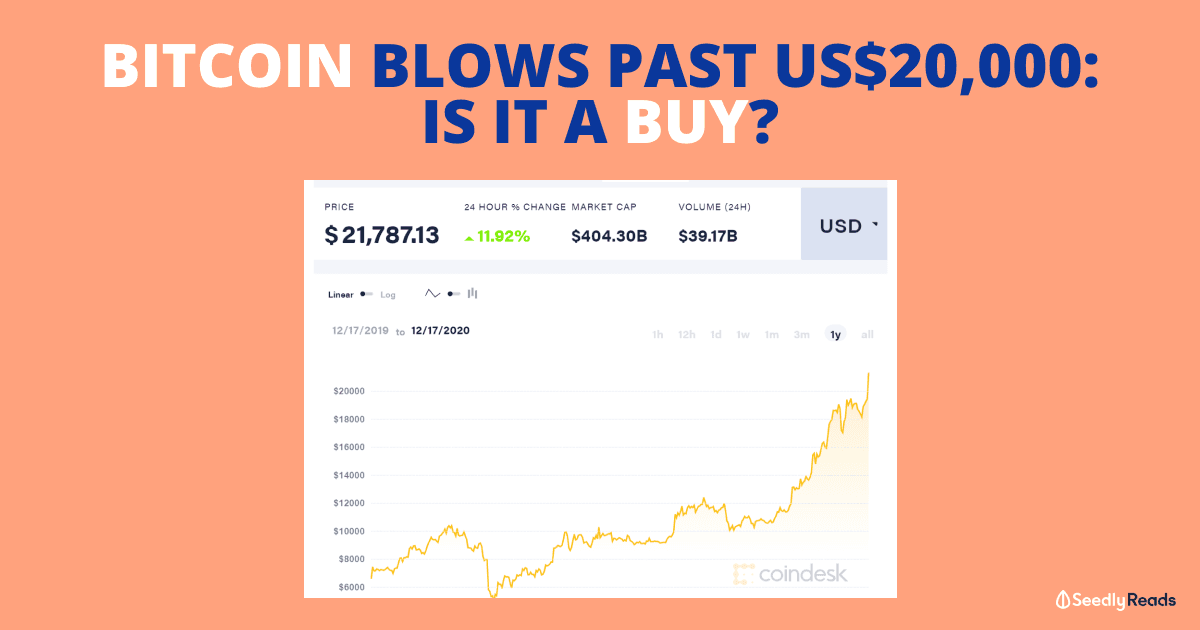 Should You Invest in Bitcoin?

According to CoinDesk, the world’s most-valuable virtual currency is up around 12% to a price of over U$21,000, hitting a new high.

The banking trio has a total market capitalisation of around US$111 billion now.

With even tech companies like Square and MicroStrategy buying bitcoin, should you jump on the bandwagon too?

Well, before that, let’s look at quotes by well-regarded proponents of bitcoin:

”[Bitcoin] is a remarkable cryptographic achievement… The ability to create something which is not duplicable in the digital world has enormous value…Lot’s of people will build businesses on top of that.” – Nassim Taleb, statistician and author of The Black Swan

“It is not a speculative investment even though it is being used as such by other people. As Bitcoin network grows the value of Bitcoin grows. As people move into Bitcoin for payments and receipts they stop using US Dollars, Euros and Chinese Yuan which in the long-term devalues these currencies.” – Eric Schmidt, former executive chairman of Google

And here are the critics of bitcoin:

“You can’t value bitcoin because it’s not a value-producing asset … it’s a real bubble in that sort of thing.” – Warren Buffett, one of the world’s most successful investors

“[Bitcoin] is the mother of all bubbles and is also the biggest bubble in human history if you compare it to, say, the Mississippi bubble or the tech bubble or tulip mania or South Sea Bubble … [T]he fundamental value of Bitcoin is zero.” – Nouriel Roubini, an economist who predicted the housing bubble crash of 2007-2008

“Blockchain technology could change our world more than people imagine … Bitcoin, however, could be a bubble.” – Jack Ma, founder and chairman of Alibaba Group

In my opinion, bitcoin is not an investment, but a speculative instrument. Benjamin Graham, often touted as the father of value investing, once defined speculation as:

The monetary value assigned to a cryptocurrency depends entirely on the ability to sell it to another person at a higher price in the future, much like a greater fool theory.

In comparison, when we buy businesses listed on the stock market, we are able to value it by looking at the company’s earnings or dividends and determine whether it makes sense to pay for the company’s share price.

In other words, what we are essentially doing is finding out a company’s current worth given a stream of cash flow. Using that stream, we are able to value the company and come to a rational decision on whether to invest in it.

To determine if Sheng Siong is a great buy at its current share price of S$1.54, we can discount the sum of its future earnings or cash flow to the present value by using a specified rate of return.

Having said that, if we still wish to put some money into cryptocurrencies, we should practice position sizing to control risks since every investment or trading opportunity has its downsides.

What this means is that we should not go all-in on bitcoin but should only use a small percentage of our overall portfolio to buy cryptocurrencies.

Buyers should also note that bitcoin has been on a volatile ride, falling to below US$4,000 at the end of 2018 after rising to over US$16,000 just a year prior, a then-record high. A similar trend could happen going forward.

Let’s end off with a lengthy-but-worthy quote by Warren Buffett, which applies to bitcoin as well (emphases are mine):

“The line separating investment and speculation, which is never bright and clear, becomes blurred still further when most market participants have recently enjoyed triumphs. Nothing sedates rationality like large doses of effortless money. After a heady experience of that kind, normally sensible people drift into behavior akin to that of Cinderella at the ball. They know that overstaying the festivities … will eventually bring on pumpkins and mice.

But they nevertheless hate to miss a single minute of what is one helluva party. Therefore, the giddy participants all plan to leave just seconds before midnight. There’s a problem, though: They are dancing in a room in which the clocks have no hands.”

Why not check out our community at Seedly and participate in the lively discussion surrounding investments.