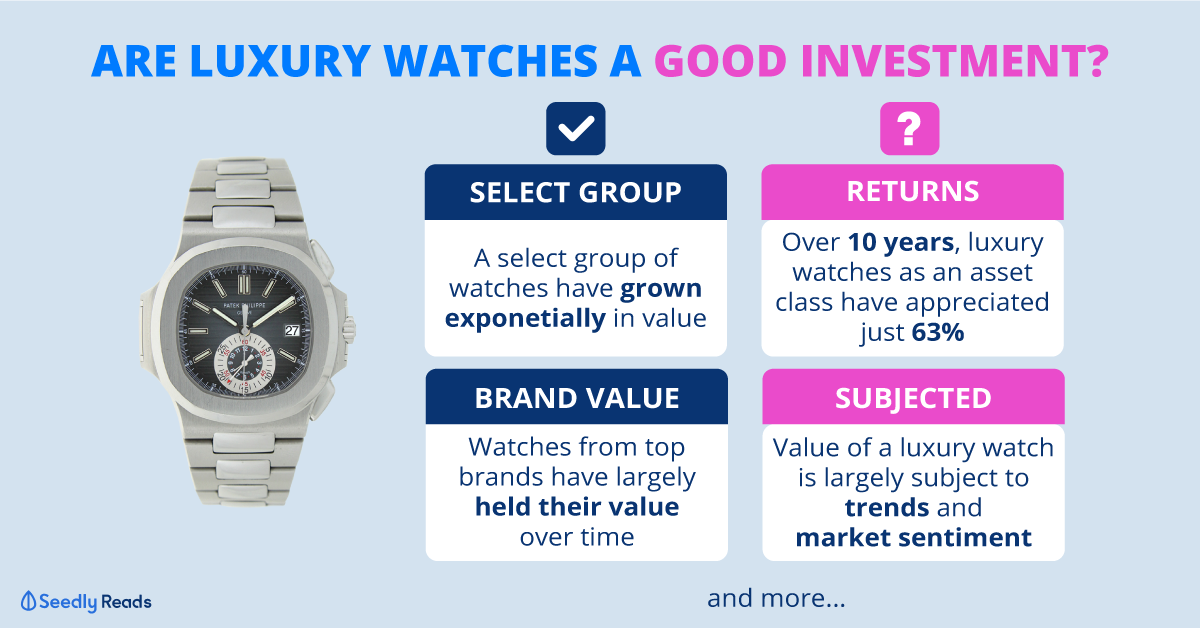 When you think of the word investment, what comes to your mind?

But, like any investor worth his or her salt would know, it’s best to own a diversified investment portfolio to reduce exposure to any one type of asset and help reduce the volatility of your portfolio over time.

In the wild world of luxury watch collecting, prices for in-demand classics from brands like Audemars Piguet, Omega, Patek Philippe, and Rolex are soaring. In some cases, their prices have doubled in a year or two.

But, should you add this asset class to your investment portfolio? Here is what you need to consider!

Should You Invest in Luxury Watches?

When investing in luxury watches, your investment returns are derived from capital appreciation.

But similar to investing in sneakers, antiques or art, you will have to know your stuff really well to profit.

Like luxury bags like a Chanel or Hermès Birkin, luxury watches have their underlying value, as they are sought after high ends goods that have historically proven to hold the value paid for them or even become more valuable over time.

More specifically, the watches from top brands like Rolex, Patek Philippe, Audemars Piguet, Jaeger-LeCoultre and Vacheron Constantin have held their value well on the secondhand market.

Also, a good watch does not deteriorate that much if you service it regularly and don’t use it to deflect bullets.

Plus, they hold sentimental value and are considered status symbols; this is why some collectors buy and hold on to watches during an economic downturn like the one we are experiencing now.

After all, I don’t think many people will get emotional about exchange-traded funds.

This is more true with coveted vintage models that only have a few of them in the world. Collectors who have gotten their hands on such precious timepieces are less likely to sell them out of panic and send the price crashing.

Most notably, the 1968 Rolex Daytona “Paul Newman” was owned by the legendary race car driver and Hollywood actor himself. This watch sold for an eye-watering US$17.75 million at the Phillips auction house in New York in 2017. In addition, the other watches sold at the auction went for crazy good prices as well.

There is usually no logical explanation for the prices paid at these auctions.

You will also need a large amount of capital and good connections to get those coveted timepieces at auctions.

But, before you get too excited, let me warn you that not every watch sold at the auction will necessarily appreciate in value going forward.

Only a select few watches might increase in value two or three times in the short term, and many of the high prices are driven by speculation and the hype surrounding certain models.

Unless you are as lucky as this unidentified woman from Canada who discovered a vintage Rolex Daytona 6241 “Paul Newman” in a sofa she bought from a thrift store (think Cash Converters).

But these cases are more of the exception rather than the norm.

Then again, not everyone is as lucky. There are some risks associated with luxury watch inventing you should know about.

Like buying sneakers, antiques or art, the value of a luxury watch is subject to trends, market sentiment and supply and demand.

As an investor in luxury watches, you are subject to the whims of cyclical trends. This means that you may have to wait years for your watch to come back into style.

When the first Daytona with an “exotic dial” hit the market in the 1960s, they were considered undesirable and ‘ugly’ and sometimes sold at half the price.

Till one fine day in 1986, Newman’s wife Joanne Woodward bought her husband an “exotic dial” Daytona personalised with the words “Drive Carefully Me” after Newman nearly died in a motorcycle crash in 1965.

Newman wore the watch everywhere and was photographed with it at major events.

In the late 1980s, the “exotic dial” Daytona was given the nickname “Paul Newman”, and the name stuck.

As a watch collector who is looking to invest in a watch, you must be able to anticipate the fickle market tastes.

But, evaluating the investment potential of luxury watches can be as complicated as the complex machinery that runs them.

You will also need a long investment horizon as you might need to buy and hold the watch until it appreciates in value.

Also, much like stock investing, people investing in luxury watches are vulnerable to bandwagon effects: a cognitive bias where people tend to do something just because other people are doing it all while ignoring their own beliefs. This is also known as the herd mentality.

Aside from the psychological and socio-economic factors, prices of luxury watch also typically rise when more people jump on the bandwagon.

This can create a positive feedback loop of an increase in prices and the growth in demand for an asset like a luxury watch.

For example, when people see Tesla’s stock price rising, they see Elon Musk, and they want to jump in to ride the growth. Similarly, with the more hyped up watches like the Rolex Daytona “Paul Newmans,” Patek Philippe Nautiluses and the Omega Speedmasters, you see them rising, and you want to jump on.

But the question you need to ask is, when does it stop? Is the price of the watch in a bubble?

Fake watches are a problem when you buy luxury watches.

According to Havocscope, about 40 million fake watches are sold each year globally, with the industry generating a net profit of about US$1 billion!

Unless you are a horological expert, it might be hard to differentiate a well made fake from the real thing.

The solution around it is to buy a brand new watch from authorised dealers.

If you are buying pre-owned, always buy from reputable second-hand dealers. If buying from a private seller, it is always good to authenticate the watch at a reputable watch store before making the purchase.

Another risk is that the watch might get damaged.

Servicing a luxury watch is not cheap at all and can range from hundreds of dollars to thousands, depending on the brand and the type of movement of the watch.

Servicing complicated movements such as a chronograph or tourbillon will definitely cost you way more than a normal automatic watch.

Return on Investment of Luxury Watches

Now that you have a better idea of the risks and rewards associated with luxury watch investing, here is some information on the Return on Investment of Luxury Watches.

Each asset class is weighted to reflect its relative importance and value within the basket. The index does not consider dealing, storage or other associated ownership costs.

Over 10 years, luxury watches as an asset class have appreciated just 63%.

You may also have to lower your expectations according to watch industry legend René Beyer who is the owner of Beyer Chronometrie: the world’s oldest watch and jewellery shop located in Zurich, Switzerland.

In an interview with finnews.asia, Beyer remarked that:

“Roughly 97 per cent of all watches that hit the market in Switzerland won’t rise in value.” But on balance, he noted that a select group of timepieces have grown as much as tenfold since 1950.”

He added that, like picking stocks, you should look at the blue-chips of watches named Audemars Piguet, Rolex and Patek Philippe as this trio of brands have made the 20 priciest timepieces ever sold at auction.

Out of the watches from those brands, he singled out three watches with bonafide investing value.

The three watches he mentioned are:

The first Nautilus Patek Philippe Nautilus Ref. 3700/A001 was released in 1976; the original retail price for this watch was US$3,100. Adjusted for inflation, the original price of the watch is about US$14,000 today.

He also warned that for other models and brands, you might need to wait as long as 50 years for the timepieces to appreciate in value.

On the other hand, if the company stops producing a watch and does not announce a successor, the value of the watch will grow considerably.

Granted, there are many examples of watches that have increased in value enormously, but like the Knight Frank report suggests, these select groups of watches are the exception and not the norm.

But an important thing to take note of is that treating an old watch purely as an investment is anything but straightforward.

If you are up to the challenge, a good place to start will be our comprehensive guide to picking a luxury watch as an investment! 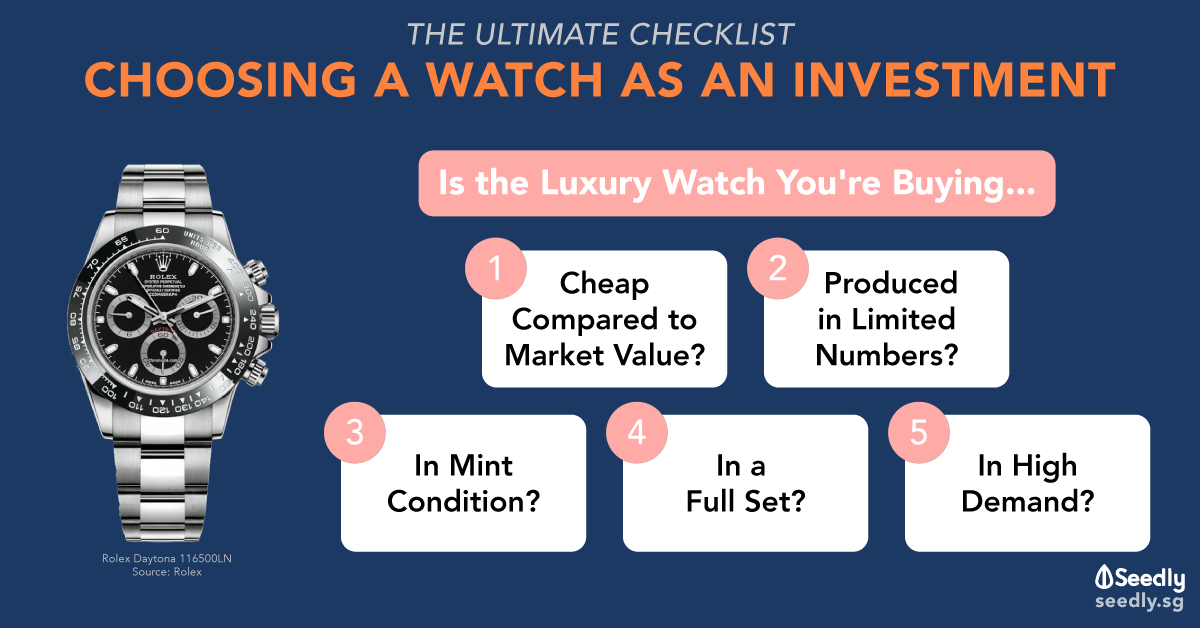 What Are Your Thoughts on Luxury Watch Investing?