BreadTalk Delists From SGX: What Shareholders Need to do When a Public Company Goes Private
147
shares 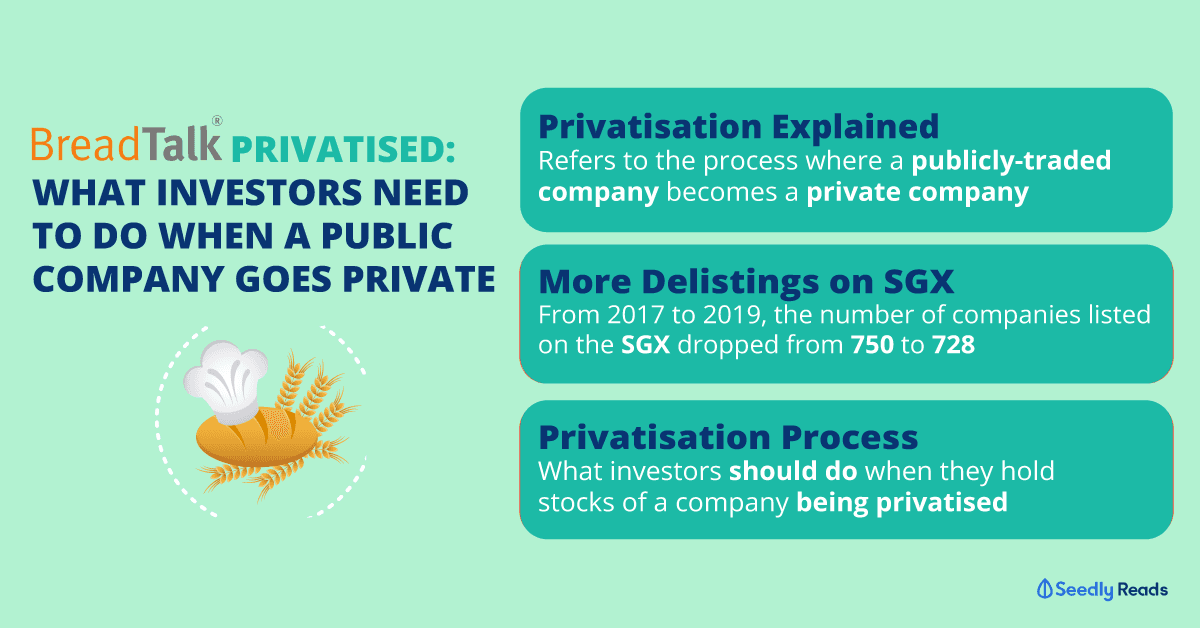 On Friday (5 Jun 2020), the BreadTalk Group was delisted from the Singapore Exchange (SGX) after the troubled company’s shares were acquired by offeror BTG Holding.

This was in part due to the growing losses from its bakeries in Thailand and China as well as its Wu Pao Chun and Song Fa branches in Hong Kong which were affected by the social unrest there.

Earlier in February, BTG Holding offered to buy all ordinary shares of the company at $0.77 per share, which was roughly 19.3% higher than the closing price of $0.645 on 21 Feb.

This offer price was also 30.1% higher than the one-month volume-weighted average price.

This got me thinking? What will happen to my investment when a company is taken private and is delisted from the exchange? And what do I need to do as a shareholder of the company?

Here is what investors need to know!

TL;DR: Guide to What Shareholders Should Do When a Public Company Goes Private

This guide is created with the aim of helping you understand the privatisation process and guide you on what to do as a shareholder.

There are two definitions of privatisation.

This latter is what BreadTalk underwent, as the offerer BT Holdings acquired the majority of the ordinary shares of the company from retail investors.

In a sense, this is like a company going en-bloc.

Like how the government buys over all the apartments for the land, a company or in this case BT Holdings buys over the shares, typically at a premium to the closing price of the share.

What Happens to When a Stock When The Company Gets Delisted?

When a company gets delisted from the stock exchange, the stocks that shareholders are holding can no longer be traded on the exchange and are removed from your Central Depository Account (CDP).

The stock then becomes a delisted over the counter (OTC) stock. Thankfully, you will still retain the same level of ownership in the underlying company.

However, you will have to find a buyer on your own, or find a market maker which can be quite a tricky process.

If the delisting is voluntarily initiated by the company, as with BreadTalk — you will be paid, so no worries there.

As in order to be listed on the SGX, the public must own more than 10% of the company’s shares.

Breadtalk voluntarily delisted after BTG Holding bought out the majority of Breadtalk’s shares.

On the other hand, we have delistings initiated by the stock exchange.

Typically, stock. exchanges have a set of rules that companies need to comply to in order to be listed on the stock exchange.

Take for example the SGX.

To be listed on the SGX mainboard, a company will have to fulfil the admission requirements which include:

If the company is unable to fulfil the requirements, SGX could delist it, which will convert shareholders stocks to OTC stocks. This will not happen immediately as companies will be given time to rectify the situation.

For companies listed on the SGX, they will be placed on a watchlist and be given 24 months to rectify the situation before they get delisted.

According to the SGX Listing Manual Chapter 13 Part V Rule 1315:

The main takeaway here is that you need to stay updated on the happenings of the company you are invested in so as not to be caught off guard.

Notable Singapore Companies That Have Been Privatised Since 2009

Since 2009 the following companies with a market capitalisation of a billion-dollars and above have been privatised:

You can see that the companies going private in Singapore are steadily increasing.

Why does this chart matter?

Because companies are no longer as reliant on retail investors for funds.

They can now easily raise funds elsewhere with a myriad of private equity firms willing to fund them as well as robust demand from end-investors.

In addition, companies are able to secure funding from alternative sources like crowdfunding and ICOs due to the looser regulatory environment.

What Can Shareholders During the Privatisation Process?

Since the privatisation of companies is becoming more common, it is important for you as an investor to know what to do when a company is being bought out or acquired.

If the price is not fair, shareholders with voting rights can vote to turn down the offer.

Once the price has been agreed upon, there are two possible choices that a shareholder can take.

Choice 1: Wait For The Acquisition/Buyout to be Completed

This is the most ideal path to take for shareholders if the price that the offering company and shareholders have voted for is satisfactory.

What’s great about this is that shareholders can just wait to get paid in cash and you do not pay a commission fee to your brokerage for selling the shares.

Choice #2: Sell Your Shares Before The Acquisition/Buyout

Typically when the buyout offer is announced, the price of the company you hold shares in will likely rise to a price close to the offer price.

If the buyout is not successful and the share price crashes, you would have sold the shares at a much better price.

However, if the buyout deal is not successful and the shareholders negotiate a better price that is higher than the price you sold it for, you will regret for selling it so early.

As the increasing number of privatisations have shown, there is no such thing as a ‘permanent stock portfolios’ that can be held till you die.

Like most situations, the privatisation of companies is a mixed bag for investors. Some might celebrate the sudden windfall as they might have bought the stock at a cheap price while the minority investors might feel shortchanged.

As retail investors, there a limit to what we can do. The best we can do is to monitor the companies you are invested so as to not get caught off guard and react accordingly.

What Are Your Thoughts on BreadTalk Delisting?