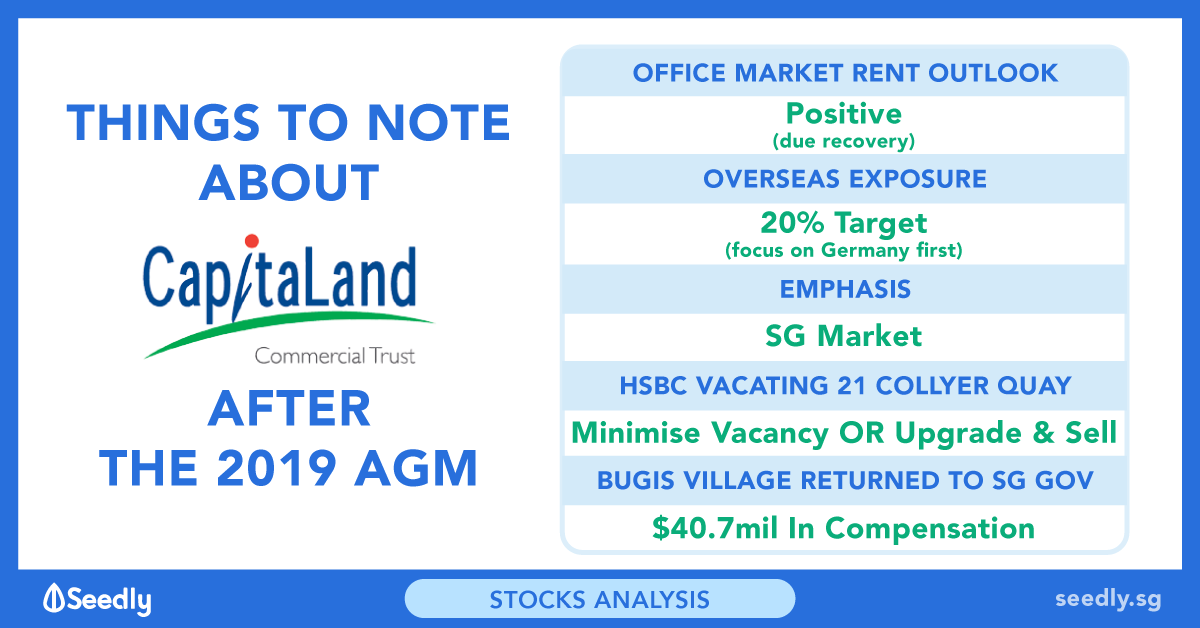 CapitaLand Commercial Trust (SGX: C61U) or CCT is Singapore’s largest commercial REIT, with 10 properties worth S$10.6 billion in its portfolio. Nine of these properties are located in or near Singapore’s prime central business district, while the tenth property is an office tower in Frankfurt, Germany.

During CCT’s recent pre-AGM investor brief and the subsequent AGM, the management team provided a number of useful insights for investors and market observers alike. This article will cover a number of salient points from these investor engagements.

Before you start with this article, I’d highly recommend that you read this pretty comprehensive piece on CCT’s key financial figures. I will not be repeating the contents of that article so make sure you read it to get the full picture.

On the other hand, the average rent of leases expiring over the next three years stands at S$10.46, S$9.59, and S$10.71 per square foot respectively. This means that unitholders can expect CCT to benefit from positive rent reversions going forward if office rents continue their recovery.

2. The Urban Development Authority (URA) Draft Master Plan will not benefit CCT substantially. The master plan, which was unveiled by authorities in March 2019, is a master plan that will guide Singapore’s development over the next decade or so.

The plan enables developers and property owners to expand the plot ratio of CBD properties if they convert a portion of offices to residences or hotels. While a large part of CCT’s portfolio is located in the CBD, CEO Kevin Chee expects limited financial benefits for the company. This is because the previous master plan already included some criteria that companies can fulfil to qualify for a higher plot ratio.

Given that CCT took full advantage of this policy, the magnitude of this change is not as large as it seems. In addition, it may not make sense to redevelop its existing, cash-generating properties to incrementally raise gross lettable area.

3. CCT’s acquisition of German office tower Galileo can be attributed to a lack of investment opportunities in the Singapore market. As Singapore’s office rents have been recovering, the valuations of office properties have also been climbing. This fact is probably best demonstrated by CCT’s disposal of Twenty Anson in July 2018. The 20-storey office building fetched S$516 million, a figure 19% above its 2017 valuation of $433 million. At that price point, the property is yielding a meagre 2.7% for its new owners. With CCT paying between 2.77% and 3.33% on its Singapore dollar loans, it is indeed challenging for the company to make accretive acquisitions in the current climate.

On the other hand, CCT is paying between 1.10% and 1.18% on its euro-denominated loans, while the property yield for office properties in Germany are at the 3-4% range. Galileo, for instance, is yielding 3.9% based on CCT’s purchase price.

4. According to the CEO, CCT did evaluate a number of other markets, including Japan and Hong Kong but ultimately settled on Germany. CCT is focused on investing in quality assets within ‘gateway cities in developed markets’. Rental income from such assets usually carry a higher level of certainty, and as such, are able to provide unitholders with a consistent level of distributions. According to CEO Kevin Chee, Hong Kong commercial properties are currently too expensive, while grade-A Japanese properties are tightly held by state-owned enterprises, making good opportunities very rare.

5. CCT is looking to focus on Germany for its next few acquisitions of overseas commercial properties. According to CCT’s 2018 annual report, it is looking to attain a 20% exposure to overseas properties over time. With just 5% of its asset value in the form of overseas properties, we can expect CCT to continue expanding its overseas presence going forward. However, Chee acknowledged that the company’s resources are finite, which makes it difficult to CCT to enter multiple markets at one go and still acquire sufficient scale. As a result, it is very likely that CCT will continue deploying capital in Germany to attain a satisfactory level of scale and network before entering a new market.

7. CCT’s lease with HSBC, the sole tenant of 21 Collyer Quay, has been extended by one year to April 2020, after which HSBC will vacate the building. Under the latest agreement, HSBC will raise rental payments to CCT by 35%, albeit just for one year. Given that this property accounted for 6.45% of CCT’s 2018 net property income, it was no surprise that shareholders and analysts alike were concerned about the fate of the property after HSBC vacates the building.

The management team was unable to share a great deal about this issue as they are still evaluating the options available to them.

However, Chee reassured shareholders that the team’s priority would be to minimise the property’s vacancy period. He also outlined some plans the company has for the property once the lease expires. For one, the team is looking to carry out upgrading works to make the building more appealing to potential tenants. Given that the building has been leased to HSBC on a triple-net basis since 2005, HSBC has been responsible for all maintenance works, hence the potential need for upgrading. He also mentioned that a sale of the property could be considered if the price is attractive.

8. Bugis Village was returned to the Singapore government on 1 April 2019 and CCT was granted compensation of S$40.7 million.

However, CCT will continue to manage the property for one year by virtue of an agreement signed with the government. The company expects to generate net income of S$1 million from this agreement.