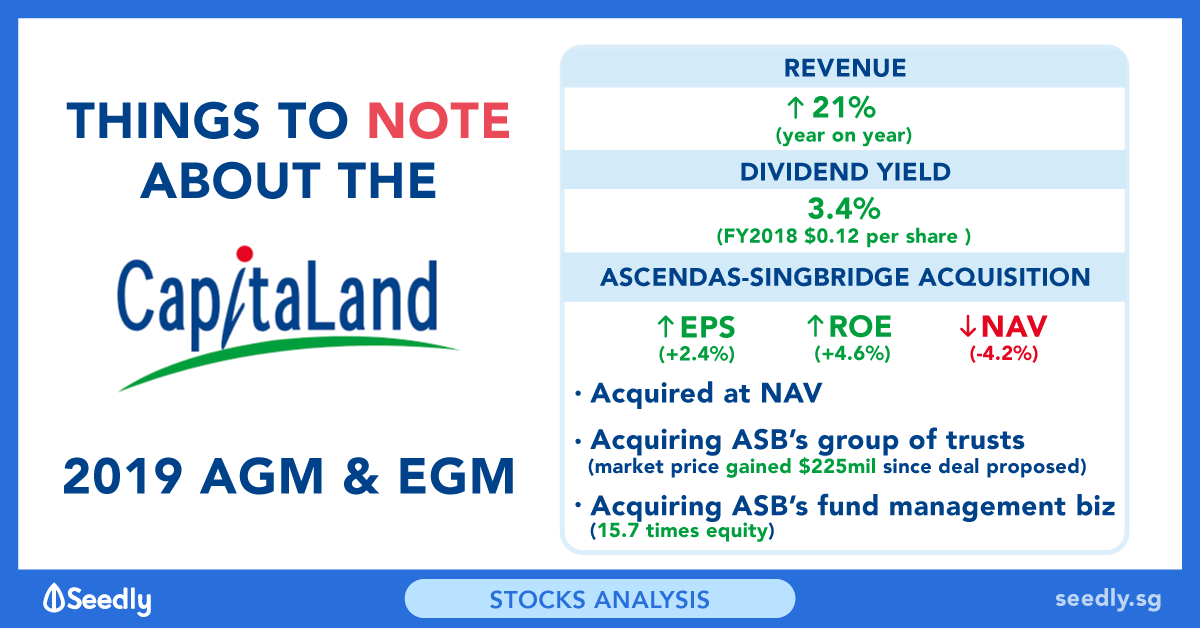 The opening of Jewel Changi Airport has been the talk of the town recently. The new mega-mall located at Changi Airport features the tallest indoor waterfall (at 40 metres), an indoor forest, and over 280 new shops and restaurants.

While Jewel has certainly made it onto the headlines and Instagram feeds everywhere, the bigger news for investors is CapitaLand’s S$11 billion acquisition of Ascendas-Singbridge (ASB). ASB is a real estate company which manages a portfolio of business/logistics parks, lodging, commercial, retail and residential properties worth S$20 billion.

1. CapitaLand has a new CEO, Lee Chee Koon, who introduced himself to shareholders at the AGM. Lee was CapitaLand’s CIO before taking on the top post in September last year and has been with the Group since 2007.

He takes over from former CEO Lim Ming Yan who announced his retirement last year and was CEO from 2013. The new CEO has hit the ground running as he’s coming in at a time when CapitaLand is expanding globally and about to make its largest acquisition to date.

Return on equity (ROE) has also been trending upwards from 6.6% in 2016 to 9.3% in FY2018. The CEO said the improved results were due to several development projects turning operational which are now generating income.

Besides the launch of Jewel Changi Airport, CapitaLand is opening Funan mall and Raffles City Chongqing mall in 2Q 2019 which would contribute additional income to the Group moving forward.

However, dividends are a more permanent measure and paying a higher dividend would send a signal to investors that the Group is able to sustain that level of dividend over the long term.

The CEO added that the Group decided to adopt a prudent stance and maintain the dividend for FY2018 due to the ASB acquisition.

5. CapitaLand spends S$150-200 million every year on technological-related expenses to ‘future-proof’ its business. These include investments in cybersecurity, backend management systems to improve productivity, and data analytics to understand customer behaviour better.

The Group also invests in loyalty programme apps like CapitaStar to motivate shoppers to visit CapitaLand malls, and Ascott Star Rewards which rewards members for staying at Ascott serviced residences.

6. CapitaLand divested S$4 billion of assets and redeployed $6 billion in capital in FY2018. A shareholder pointed out that if CapitaLand ‘sells high’, it normally has to ‘buy high’ when it redeploys its capital. He wanted to know how management mitigated this issue.

The CEO said that CapitaLand has an advantage as a global company to divest in markets which are expensive and redeploy its capital in markets which are cheaper. He added that CapitaLand hasn’t been very aggressive with land tenders in China as the price of land plots in cities like Shanghai and Beijing was sometimes higher than the price of a completed building nearby.

7. A shareholder asked how the management planned to mitigate the impact of e-commerce on CapitaLand’s malls. The CEO explained that the malls are still seeing positive rental reversions, and have continually introduced fresh retail concepts and invested in loyalty programmes to attract shoppers.

However, he pointed out that CapitaLand is ultimately a landlord and not a traditional retailer directly competing with e-commerce players. Although e-commerce is growing, the cost of delivery and logistics is high, and larger e-tailers are also starting to shift offline as a way for customers to view and receive their purchases. If a mall is in a good location connected to transport hubs, shoppers will continue to patronise it which will attract both online and offline retailers to set up shop there.

8. CapitaLand ended the year with a net-debt-to-equity ratio of 0.56, up from 0.49 in 2017. CFO Andrew Lim revealed that the management previously had a target ratio of 0.45 to 0.50, but after discussions with investors, it was felt that gearing could go higher.

The management is now comfortable with a net-debt-to-equity ratio of 0.60 to 0.65. The acquisition of Ascendas-Singbridge would temporarily bring the ratio to 0.72, but the management targets to bring it back down to 0.64 by end-2020 through capital recycling and retained earnings. Interest coverage ratio will fall slightly from 8.3 to 7.2, but it is still robust.

9. CapitaLand is funding the S$6.0 billion purchase consideration of the ASB acquisition through an equal amount of debt and new shares issued to the vendor, Temasek. CapitaLand will assume ASB’s debt of S$5 billion which brings the total acquisition value to around S$11 billion. The new shares will be issued at S$3.50 per share, which is a 7.03% premium over CapitaLand’s last traded price before the announcement. (CapitaLand shares have risen to around S$3.50 since on the open market.) The acquisition will increase earnings per share by 2.4% to 43.1 cents and ROE by 4.6% to 9.78%. However, net asset value (NAV) per share will be diluted from S$4.55 to S$4.36.

10. The ASB acquisition will expand CapitaLand’s asset classes to include business/logistics parks, industrial, lodging, commercial, retail and residential properties in 180 cities across over 30 countries. The CEO believes the acquisition will allow CapitaLand to gain a foothold in the business/logistics parks and industrial segment, especially in the key markets of Singapore, China, India, and Vietnam.

He added that it is more challenging to enter a new segment from scratch – buying property by property – given the scale of CapitaLand, and it’s better for the Group to acquire a player like ASB while gaining new talent and capabilities in the process.

11. A shareholder argued that CapitaLand was overpaying for the ASB acquisition while another asked how long it would take for the Group to earn back the 4% loss in NAV per share. The CFO helped to break down the components of the deal:

CapitaLand has grown its NAV per share at 4% on average over the last four years and he believes that the Group can actually increase its NAV growth due to the potential opportunities in the enlarged portfolio after the acquisition.

12. The CEO openly shared that the acquisition would also bring certain hurdles. For example, Ascott REIT and Ascendas Hospitality Trust would come directly into conflict with regards to their overlapping investment mandates – both trusts own hospitality properties in Singapore, Japan, and Australia.

The management is discussions with the Monetary Authority of Singapore to resolve the conflict of interests. Possible solutions include seeking unitholder approval to narrow their respective investment mandates, selling one of the trusts, or merging both of them.

The management is reviewing the options and will make a decision based on the best interests of both CapitaLand shareholders and the trusts’ unitholders.