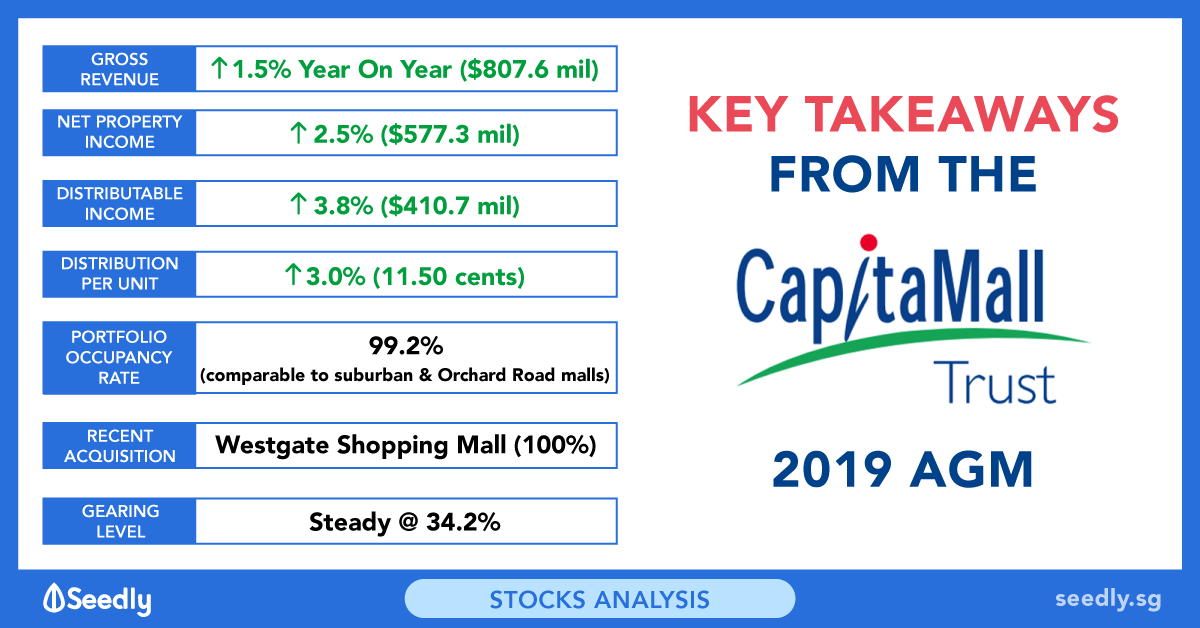 CapitaLand Mall Trust (CMT; SGX: C38U) is the largest retail REIT in Singapore, and the first REIT to be listed on the SGX back in 2002. It currently owns 15 malls across Singapore, which is worth a total of S$10.1 billion as of 31 December 2018.

CMT is known for its remarkable financial standing and income stability. Rated ‘A2’ by Moody’s, CMT is the highest-rated REIT in Singapore. Despite this, there are a number of concerns over the REIT’s future growth, especially because its operations are limited to the Singapore market.

I attended CMT’s AGM to find out about the company’s future growth avenues and also the management team’s outlook for the local retail sector. Here are 11 things I learned from the 2019 CapitaLand Mall Trust AGM.

1. Gross revenue increased 1.5% year-on-year to S$807.6 million in 2018, while net property income (NPI) rose 2.5% to $577.3 million. This growth can be attributed to the company’s acquisition of Westgate on 1 November 2018. According to CEO Tony Tan, this places CMT on track for further growth in 2019, as the company recognises its first full year of income contribution from Westgate.

3. CMT maintained its portfolio occupancy rate at 99.2% in 2018. This is a very strong figure, and it compares well against suburban mall and Orchard Road mall occupancy rates of 91.1% and 94.9% respectively.

However, other key metrics were mostly flat.

4. CMT acquired the remaining 70% stake in Westgate for S$1.13 billion, partially financed by its divestment of Sembawang Shopping Centre for S$248 million. The REIT now has full ownership of Westgate. Shortly after the acquisition, CMT commenced asset enhancement initiatives (AEIs) for the mall. These initiatives are aimed at increasing store visibility and making the shopping experience more comfortable for visitors.  For instance, the company created a new entrance beside the mall’s taxi stand, which created a new access point to the mall. Additionally, the company enclosed selected alfresco F&B outlets with air conditioning.

5. CMT’s gearing level held steady at 34.2%, which means the company has S$1.1 billion in capital headroom before reaching 40% gearing. Given this sizeable buffer, the CEO said that his team would continue to explore opportunities to deploy capital. Other metrics such as cost of debt and term to maturity continue to remain healthy at 3.1% and 4.4 years respectively.

Going forward, the company has S$562.6 million of debt maturing in October 2019. This figure includes S$405 million of debt acquired that came along with their acquisition of Westgate. The company has already started refinancing this debt, having raised over S$500 million so far through the issuance of a seven-year S$100 million bond yielding 3.15% and a 10-year US$300 million bond yielding 3.22%.

6. In 2019, Singapore’s retail floor space supply will see its largest increase since 2014. As seen in the chart below, retail floor space is expected to grow by 2.6% from 65.5 million to 67.2 million square feet this year. This new supply comes from the opening of three shopping malls this year: Jewel Changi Airport, Funan, and Paya Lebar Quarter.

Beyond 2019, incoming supply is expected to be minimal, with supply growing at a compounded annual growth rate of 0.7% between 2019 and 2023. This sluggish growth in incoming supply is comforting to the CEO who shared that the biggest challenge to CMT’s business is not e-commerce but new supply. As Singapore is densely populated and limited in size, new malls are expected to cannibalise some of the footfall at existing malls.

7. A shareholder asked if the management had implemented online-to-offline (O2O) initiatives in their malls to combat e-commerce. The CEO replied that CMT has been trialling O2O initiatives in the form of click-and-collect stations, where consumers can collect goods purchased on e-commerce sites like Lazada. In fact, Funan, slated to open in June 2019, features an expanded version of the traditional click-and-collect station.

While the long-term success of this model remains to be seen, Singapore is exceptionally well-connected by public transport. As a result, local consumers encounter retail facilities on a daily basis, which suggests that such O2O initiatives could easily be part of the average consumer’s lifestyle.

8. Another shareholder expressed concern over JCube’s declining occupancy rate, and asked about the management’s plans for the property. JCube’s occupancy rate is lower than any other property in CMT’s portfolio. To make things worse, the current occupancy rate, which stands at 90.9%, declined considerably from 94.3% in the prior year. According to the CEO, CMT is positioning the mall as a hub for sporting activities, adding to its existing ice-skating rink. For instance, they recently brought GYMBOXX, a 24-hour gym facility, into JCube as one of its tenants.

However, management continues to explore other opportunities such as redevelopment, or even divestment should there be a compelling offer. Despite its lacklustre operating metrics, management is optimistic about JCube’s future.

The new Jurong East bus terminal, which is currently under construction, will be located next to JCube. This is expected to bring higher footfall to the mall going forward. In addition, the government is planning to develop the Jurong Lake District over the next decade into a township with 20,000 new homes.

9. Another shareholder asked if CMT has plans to expand overseas for further growth, given the Singapore market’s limited size. While the board are keeping their options open, the CEO noted that a number of developed markets including the U.S. and UK are going through a period of volatility. In light of these, the CEO opines that Singapore is still the best market to be in at the moment.

Chairman Adjunct Professor Richard Magnus added that any investment has to fulfil a set of criteria, including rental sustainability and potential for further value creation through AEIs or other avenues. With this in mind, overseas investments may not always be financially accretive for shareholders. In closing, he assured shareholders that the board is constantly evaluating investment opportunities, whether local or overseas.

10. A shareholder asked if the opening of Jewel Changi Airport would affect CMT’s 2019 lease renewals in Tampines and Bedok. The CEO sensed the shareholder’s apprehensiveness about the situation, and quipped that he is ‘equally nervous about Jewel’. As a brand-new mall with novel ideas and attractions, footfall in many Singapore malls will likely be affected, especially those located in the east.

In anticipation of Jewel’s opening, the management had completed a number of AEIs over the past few years to make Tampines Mall more attractive. The CEO also noted that the mall primarily serves the day-to-day needs of Tampines residents, which is a good defence against Jewel. At the same time, the company will also explore other options, such as a possible collaboration with neighbouring malls Tampines 1 and Century Square. The CEO was, however, less concerned about Jewel’s impact on Bedok Mall. Besides being further from Jewel, Bedok Mall would stand to benefit from a batch of Build-To-Order (BTO) flats slated for completion in 2021.

The chairman, who is also a Changi Airport Group board of director, added that Jewel was not built to cannibalise footfall from neighbouring shopping malls. Instead, Jewel targets tourists who are in transit, which is why the mall’s tenant mix differs from malls in the heartlands.

11. A shareholder inquired if CMT will benefit in any way from the merger between CapitaLand and Ascendas-Singbridge. According to non-executive non-independent director Andrew Lim, CMT does not directly benefit from the merger, as Ascendas-Singbridge is not active in the retail space. However, it owns a number of business parks and industrial properties in the Jurong precinct, where three of CMT’s malls are located.

This means that CMT will indirectly benefit from this merger, given that it makes the combined entity a major landlord in the Jurong region. Lim explained that this confers the group with ‘an ability to influence how that rejuvenation… will best benefit the sponsor and CMT’.