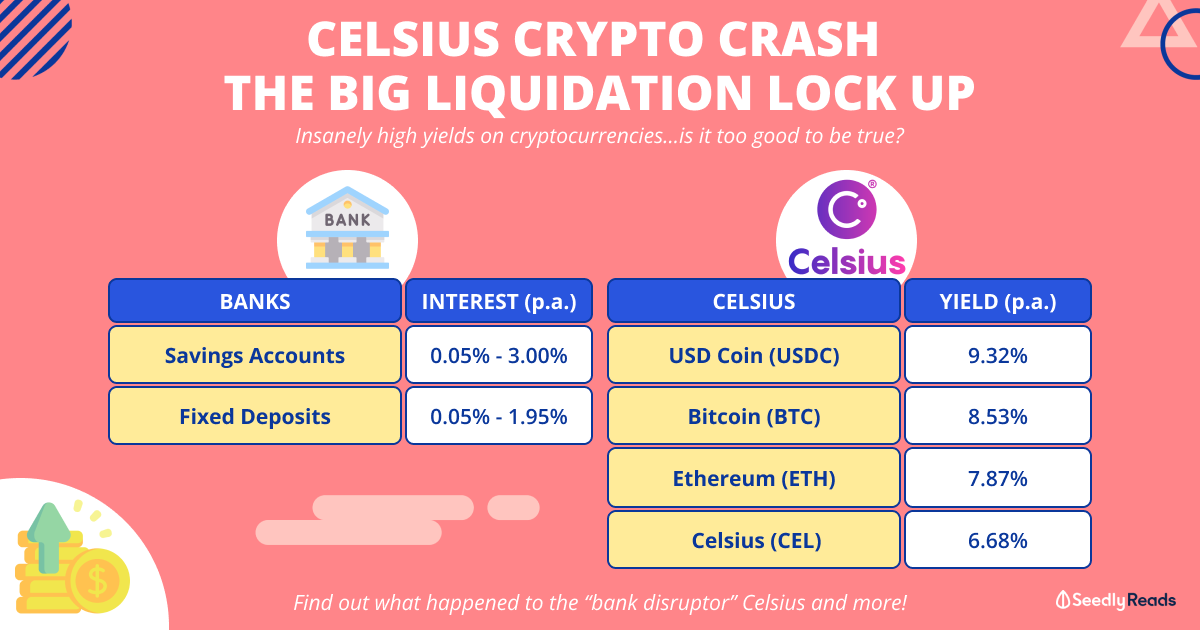 To many of us, they are trusted financial institutions regulated by governments where we deposit our hard-earned money, knowing that it is safe and can be withdrawn in an instant.

But imagine parking your life savings in a “bank” and not being able to withdraw even a cent from your account.

That is the reality of many customers of Celsius, a self-proclaimed “DeFI” platform that is said to disrupt banking while their customers earn up to a crazy and unsustainable 18.63% Annual Percentage Yield (APY).

Sound familiar? That’s because it was exactly what happened with the TerraUSD (UST) and Anchor Protocol collapse.

Celsius has promised that they are acting in their customers’ best interests and that “banks are not your friends”.

Yet, on 12 June 2022 till the time of writing, Celsius paused all withdrawals, leaving many of its customers with their money stuck or in the worst case, gone.

So here’s the lowdown of what happened and what you can learn from yet another possible cryptocurrency sham.

Disclaimer: The information provided by Seedly serves as an educational piece and does not constitute an offer or solicitation to buy or sell any investment product(s). It does not take into account the specific investment objectives, financial situation or particular needs of any person. ​Readers should always do their own due diligence and consider their financial goals before investing in any investment product(s). 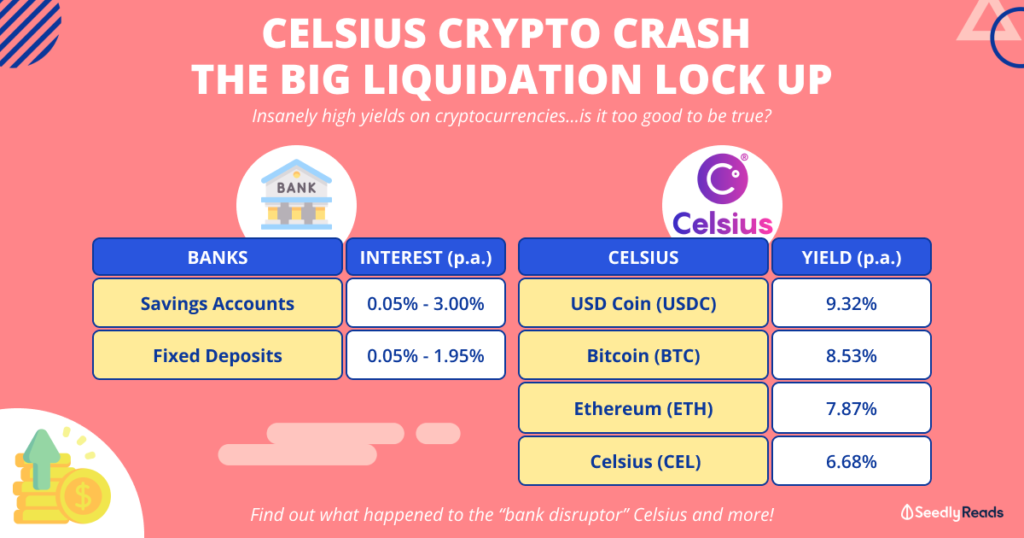 In order to understand Celsius, we first need to look at its founder and CEO, Alex Mashinsky.

Aside from lots of failed startups and false claims such as being a key inventor of the Voice Over Internet Protocol (VOIP), Alex has an eerily similar vibe to what we know as “financial gurus”.

He loves to upsell himself and has even claimed to be a “pioneer of web-based exchanges” including Twitter, Skype, the App Store and the Netflix Streaming concept.

Pulling away from his super sus (suspicious) history, here’s how Celsius started.

And if you search up Google images for his name, you’ll likely see him wearing a shirt emblazoned with his favourite phrase “Banks are not your friends”.

He believes that banks are ripping people off by taking their money and using it to generate more money while offering customers paltry interest rates.

Armed with the emotional appeal that he is helping us fight the big guys and giving power back to the people, he created Celsius, a company that is “not a bank” and aims to “unbank” its customers by giving high af interest on their crypto deposits…

By doing exactly what a traditional bank does, i.e. lending and borrowing money.

The huge difference? Celsius is not a licensed financial institution.

If Celsius fails, here’s what will happen as stated in their terms of use:

In the event that Celsius becomes bankrupt, enters liquidation or is otherwise unable to repay its obligations, any Eligible Digital Assets used in the Earn Service or as collateral under the Borrow Service may not be recoverable, and you may not have any legal remedies or rights in connection with Celsius’ obligations to you other than your rights as a creditor of Celsius under any applicable laws.

Based on my interpretation, your money is as good as gone should Celsius go down as there is no legal protection for your funds.

On top of all this, the company has been criticised for having incompetent management, with its CFO being arrested for money laundering and its Chief Revenue Officer reportedly starting a business with a convicted money launderer.

The Tokenomics of the Celsius Network

Even if we toss all the initial red flags to the side, the whole system just relies too much on the demand and supply of one cryptocurrency…which is again, eerily similar to what has happened with UST.

Except that in this case, we aren’t talking about earning yields from UST but from other cryptocurrencies.

As with any bank, you simply cannot loan out all your cash as you need some on hand to pay withdrawals to depositors.

To “solve” this problem, Celsius introduced a cryptocurrency called the CEL token that runs on what they call the CEL Flywheel.

Without going into too much detail, CEL tokens are used to pay customers up to an extra 30% interest if they choose to receive their payments in CEL.

Meanwhile, borrowers can get up to a 25% discount on loans with CEL on all interest payments.

As the supposed cherry on top, those who “HODL” CEL tokens can earn 6.68% APY.

All these perks were meant to generate demand for the token which Celsius could then sell in order to pay back depositors.

Again, eerily similar to that of LUNA being sold to stabilise UST.

But where do all the insanely high yields come from?

That’s a question that Alex seems to love avoiding when asked in interviews while simply stating that you can “earn dividends” with Bitcoin, implying the same for other cryptocurrencies that are earning yield on the Celsius platform.

In essence, with this system, it seems like money can just go up forever until it doesn’t…

Which was what happened over the past few months.

The Big Liquidity Lock Up

Here’s the big problem that is beginning to unfold before our very eyes.

The company has billions of dollars in assets and has a huge chunk of these deposits locked up in Lido’s Staked Ether (stETH).

When stETH started losing its peg to Ethereum (ETH), it prompted withdrawals from Celsius’ customers.

Long story short, the company didn’t have enough liquidity to pay back depositors.

To make matters worse, the CEL token, which served the purpose of generating money to pay back depositors, fell, along with the entire crypto market.

Celsius started taking loans from other companies in order to pay their customers’ withdrawals.

As economics dictates, the drop in demand for CEL started showing as prices fell, putting more pressure on Celsius to take out loans as they now have lesser money, creating a vicious spiral down.

And since we can see transactions on the blockchain, some users on Twitter began showcasing their findings and everyone could see that Celsius was taking huge loans.

Naturally, customers of Celsius began to doubt that Celsius was backed and trustworthy, leading to more of them pulling their money out of Celsius.

Once Celsius reached a breaking point whereby they could no longer pay withdrawals, the announcement of a pause on all withdrawals, swaps and transfers came, sending CEL plunging in price further.

.@CelsiusNetwork is pausing all withdrawals, Swap, and transfers between accounts. Acting in the interest of our community is our top priority. Our operations continue and we will continue to share information with the community. More here: https://t.co/CvjORUICs2

Right now, customers of Celsius are still unable to withdraw their funds amidst the sea of red in both the stock markets and crypto markets. This incident with Celsius has also had further repercussions on the wider crypto market, amplifying the effects of the Terra/LUNA crash.

Unfortunately for some, they have their life savings parked with Celsius and this spells a dangerous situation for them.

Celsius is said to be seeking help from Citigroup and is attempting to salvage the situation.

But judging from what we’ve seen from the Terra/LUNA crash, I believe that this spells the end for Celsius as the fundamentals of the company, its token and systems are weak.

That said, I do hope that Celsius customers’ are able to get their funds back.

In my opinion, the crypto crash has started to weed out companies, cryptocurrencies and platforms with poor fundamentals.

While I still believe in the concept of cryptocurrencies as a means of exchange, it is apparent that many in the crypto world are just seeking a get-rich-quick method.

With that, rug pulls, crypto scams and the cryptocurrency equivalent of bank runs are popping up as time goes on.

As always, remember to do your own due diligence to avoid putting your financial life at risk. This means researching everything from who runs the company that you’re putting your hard-earned money with, how the company works and whether the systems in place are actually backed with proper fundamentals.

As the saying goes, “When things seem too good to be true, it probably is”.

If you happen to be one of those with your life savings in Celsius, remember that this is not the end and that money is not all there is to life.

Money can always be earned back and the most important thing here is to learn from your mistakes.

If you require, here are some resources to help out: