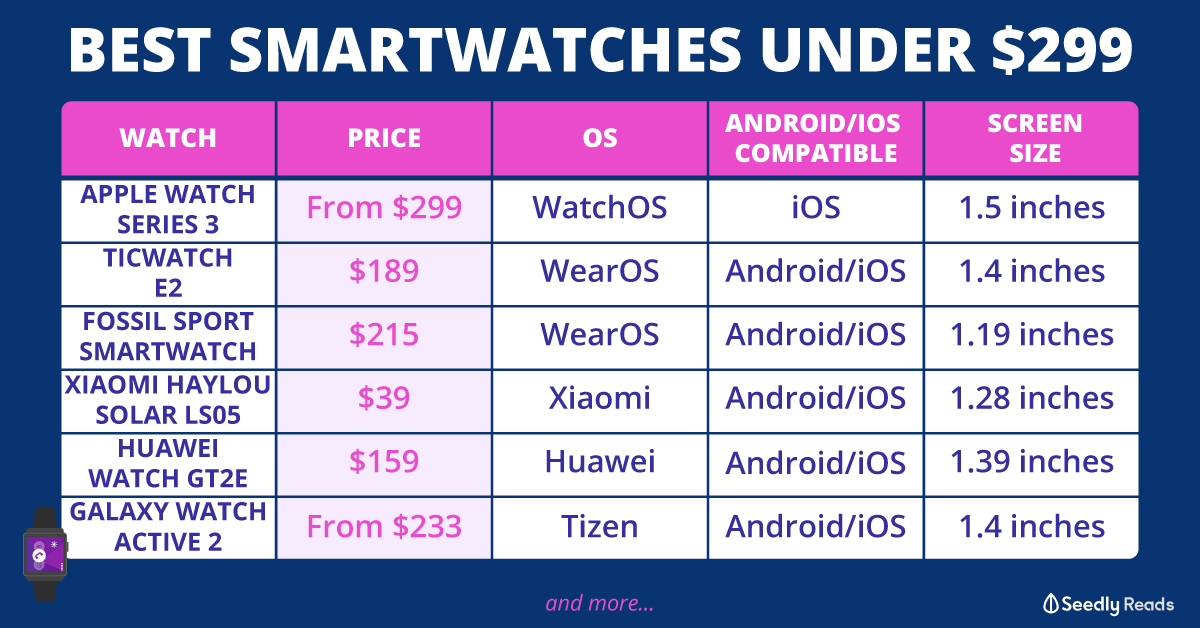 Every now and then, I get amazed at the speed at how technology progresses.

It was only about 30 to 40 years ago that humans were dreaming about wearable technology and featuring it in fiction.

But now, smartwatches are a reality.

But fear not, there are plenty of cheaper smartwatch alternatives under $300 you can get to suit your needs and budget.

Most of them will help you stay connected and up to date with notifications, track your fitness, and not make you cry when you look at your bank balance at the end of the month.

Although these smartwatches may not pack every feature available, they are more than enough wearable technology for most.

*Information and prices accurate as of 30 October 2020.

How to Choose the Best Smartwatch in Singapore for You?

Before we begin, it would be important for you to keep your needs in mind before going through the list.

Are you looking for fitness and health features like GPS to level up your workout?

Do you want something that will keep you notified and connected with messages and calendar appointments?

Or do you need something with a Near Field Communication (NFC) chip for digital payments?

Keep this in mind!

We will first start with the Apple Watch from Apple Inc’s (NASDAQ: AAPL).

Although, it is not the most affordable, the cheapest Apple Watch you can get is the Apple Watch Series 3 which retails for $299 for the 38mm version and $349 for the bigger 42mm version.

The Apple Watch Series 3 is now available with an aluminium case, either silver or space grey. It comes in 38mm and 42mm size options, but it is only available in a GPS-only model with an optical heart sensor.

There is also a GPS and Cellular option available in Singapore.

But, battery life is average, with Apple rating it for 18 hours of general use, which can probably last you a day and a half.

This watch lets you:

Here’s a link to where you can buy the Apple Watch Series 3.

Next up we have the best cheap Google smartwatches that support Google’s Wear OS.

No list of affordable smartwatches is complete without the Mobvoi TicWatch E2.

If you want something that is built for your Android phone with Google’s WearOS, the TicWatch E2 is one of the best cheap WearOS watches.

The watch is a solid affordable gateway into the world of WearOS smartwatches.

Battery life is also decent as according to Mobvoi, it can last for about 2 days of general use.

However, there are some drawbacks as the 46mm case that is 13mm thick is only available in black.

There is also no NFC for payments which is quite the bummer. But, that is not much of a con now as support for Google Pay NFC payments for smartwatches is currently not available in Singapore.

Here’s a link to where you can buy the TicWatch E2.

If you can afford it, opt for the Fossil Sport Smartwatch.

For just $26 more you get NFC, a faster Snapdragon 3100 processor and arguably better design.

But, do note that support for Google Pay NFC payments for smartwatches is currently not available in Singapore.

Battery life, however, is not as good, as according to Fossil, it can only last for about 1 day of general use.

But, you can use its low energy mode and extend it for one more day of use.

However, there are some drawbacks as the watch is only available in Rose Gold. But, you are free to change the bands.

Next up, we have the smartwatches that are compatible with both Android and Apple phones but do not run WearOS or WatchOS respectively.

Here’s a link to where you can buy the Fossil Sport Smartwatch.

Here’s a relatively hidden gem for you.

Despite its slightly misleading name as the watch does not have a solar panel; the Xiaomi Haylou Solar is a decent smartwatch that has a great design, sturdy metal frame and reliable build.

The watch also comes with a  rugged IP68 rating which means you can wear it all the time – just don’t take it into the pool.

What I like about this watch is that it has pretty stellar 30-day battery life and a bright LCD display.

However, functionality is not as extensive as the other smartwatches on this list. Think of it as an upgraded fitness tracker.

Software is simple and reliable and for $39, it is one of the best deals around.

Here’s a link to where you can buy the Xiaomi Haylou Solar LS05.

If you want something a bit more advanced, you can consider the Huawei Watch GT2e.

The watch’s fitness and health features and great price makes this an attractive proposition.

You’ll get quite a bit for the price.

The watch has a 3.5cm AMOLED display that is bright and sharp. You also can take it underwater as the watch is water-resistant up to 50m.

In addition, you get many sport profiles including swimming, cycling and an excellent running experience and sleep tracking.

Battery life is also great with 14 days of general use as the watch runs LiteOS which is a lot less taxing on the battery compared to Google’s WearOS.

However, there is a couple of drawbacks.

The watch is better for Android smartphone users due to its stress tracking and the ability to store songs on the watch. But for iPhone users, the app is more bare-bones.

Also, the watch is unable to take advantage of WearOS apps.

Here’s a link to where you can buy the Huawei Watch GT2e in Lava Red or Mint Green.

Last but not least we have the Samsung Galaxy Watch Active 2.

Although the watch does not run Google’s WearOS, this might actually be a good thing as Samsung has been consistently improving Tizen and provided updates Galaxy watches for years.

The watch itself is not too heavy, has a solid build and a big, bright always-on AMOLED display.

Not to mention its 50m water resistance, decent 2 day battery life and standard 20mm straps which can be swapped out.

Support for NFC payment is also available in Singapore for the watch which is great.

The watch can be used with an iPhone, but the Apple Watch is miles better on iOS.

Also, the watch is unable to take advantage of WearOS apps.

Here’s a link to where you can buy the Samsung Galaxy Watch Active 2.

Looking to Save Money?

Want more lifestyle tips? Why not join our SeedlyCommunity!

This way you’re part of a community of like-minded peers who can help you save more even faster!

Good luck and all the best!