Cheapest Karaoke Studios To Sing Your Heart Out 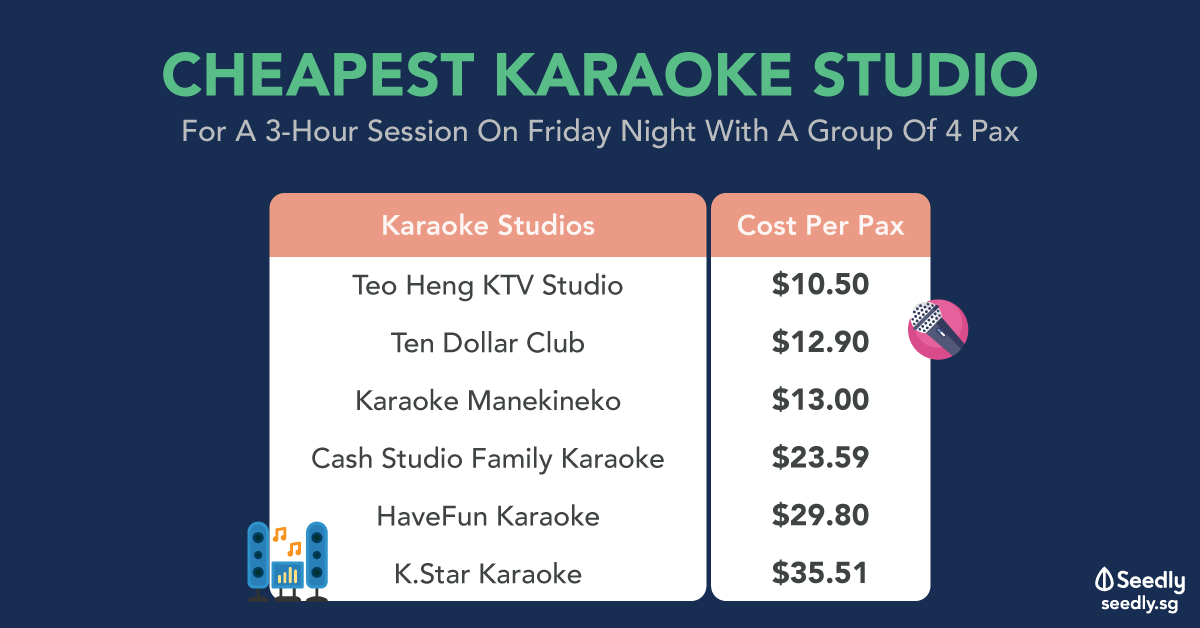 Cheapest Karaoke Studios To Sing Your Heart Out

The acoustics are decent, I can choose any song I want and no one’s gonna judge me!

Well, I guess not, else karaoke studios would have gone out of business…

Fret not, let us do the comparison to find the karaoke studio that won’t break your bank so that you can channel all your energy into singing!

Some of you may already have a favourite karaoke studio that you frequent for the facilities or choice of songs.

But for the rest of us who just want to sing our heart out once in a while, you probably will want to find the cheaper options, amirite?

I might be weird, but the rare times I actually went to a karaoke studio were on weekday nights… 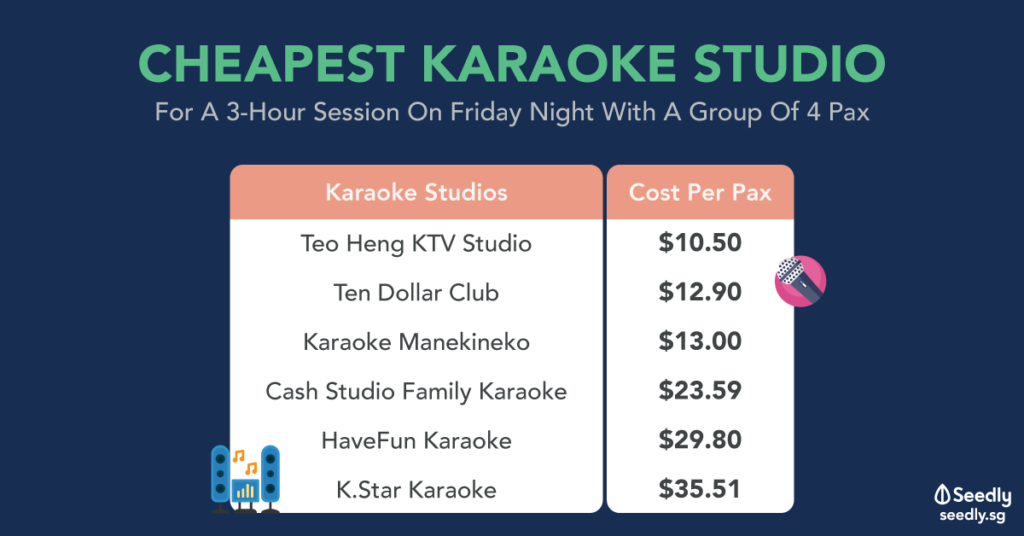 Since it seems like karaoke is an activity more suited for a Friday night, let’s compare the rates for a 3-hour session for a group of 4.

While some outlets have different prices, the rates used are from the cheapest options available.

Psst, it’s a long article, click the links to be transported!

Since it’s a Friday night, the regular hourly Small Room rate is $14 and your group will be paying a total of $42.

Even though you’d expect that you’ll only need to pay $10 per person since that’s what their name suggests, by the time you include the other charges, it amounts to $12.90 per person on a Friday night.

It’s a little far, but the outlet at Tampines 1 will only cost you $13 per person for a 3-hour session.

It’s a little far, but HaveFun Karaoke at Downtown East has the best rates at $29.80 nett per pax.

With an hourly room rate of $40++, your group will be paying a total of $120++ for the Thematic Room at the Orchard Central outlet.

With 14 outlets all around Singapore, Teo Heng KTV Studio is probably the most accessible choice for frequent karaoke studio goers.

Not to mention that it has the lowest rates!

It’s also no wonder why regulars will keep going back since they have a loyalty card programme that gives them 1 hour free for every 5 hours accumulated!

Interestingly, Teo Heng has a no-alcohol policy so you’ll really get to enjoy a family-friendly singing session!

Other than that, feel free to bring your own food and grab drinks at $1 each.

There are two distinct rates for Teo Heng KTV Studio and it seems like it’s based on the location of the outlet.

Prolly because of their own rental rates…

For the sole purpose of consolidating the rates, let’s identify them by regular and premium outlets.

Good news for those staying in the North and East since most of the regular outlets are located near you!

Big fan of Teo Heng, but spend most of your time in town? Or Ang Mo Kio Hub?

It ain’t that bad, the prices are only slightly higher during peak hours.

Once you’ve split it amongst the whole group, it’s pretty negligible!

I know, some of you might be quite shy and can only sing comfortably with that one friend you trust.

Doesn’t make sense to pay for a Small Room when there’s only the two of you, right?

Or you might be organising a get-together for more than 10 people and how are you all going to sneak in and squeeze in the Large Room?

Well, here are the outlets who can cater to you!

Erm, the Ang Mo Kio Hub outlet is a tiny bit confusing, the regular rooms are of a higher rate, but the special rooms are the same as the rest!

You’d think that you’ll only need to pay $10, but once you’ve included the other charges, it’s slightly more than that.

But hey! It’s still pretty cheap compared to the other karaoke studios below, so don’t be picky!

I guess the only problem is that they only have 3 outlets for you to choose from.

Dress well if you plan to be staying in the main area as they have a pretty strict dress code. Just don’t go in singlets and slippers, ya?

Just note also that you can’t bring your own drinks, non-alcoholic ones included.

Staying true to their name, the prices at all 3 outlets are $10 and are subject to other charges, as you can see from the multiple plus-es next to their rates.

C’mon, who can resist cute cats?

Taking over the old karaoke chain K Box, you’ll now be greeted with bright and cute rooms for your singing sessions!

Besides, you can sing and eat your heart out with their free-flow drinks and tidbits!

They’ve also got rooms big enough to accommodate up to 30 pax so go on, bring your whole kampung!

The outlet with the cheapest rates, but it’s all the way in the East.

If you have a big group of karaoke kakis and don’t mind travelling further, you should consider this outlet!

Otherwise, the *SCAPE outlet is your next best alternative if you want an accessible location!

The prices at SAFRA Punggol and SAFRA Jurong are just slightly higher than the one *SCAPE, about $1 – $2 more per pax.

Shouldn’t be a problem if you just drink one less cup of bubble tea, right?

The slightly more expensive Karaoke Manekineko outlets, but nothing too crazy still.

If you’re looking to have the full package with lunch or dinner buffet, you should check out the Karaoke Manekineko in Orchard Cineleisure!

But at least the outlets are pretty accessible and are more affordable when you go with a big group or on a non-peak night!

Gone are the days of smuggling snacks in your bags since you’ll get to bring your own food and drinks into the studio. Just not alcohol though.

Students also enjoy 10% off the total bill from Sunday to Thursday, you just need to flash your ID!

It’s cool how Cash Studio has an outlet solely for members, I wonder if there are any special features inside. Has anyone been there?

Apart from the two outlets in Bedok, you’ll enjoy the same rates at all other outlets.

All rates are subject to a surcharge of $2 nett and 10% service charge, and you’ll get your first drink free!

It gets pricey on Friday and Saturday nights but go grab more friends to join you so that you can split the rates!

Again, you’ll pay more on Friday and Saturday nights at Djitsun Mall @ Bedok, but the non-peak periods are the same rates.

Cash Studio’s members-only Simpang Bedok outlet only opens at night, so you guys must be pretty important! 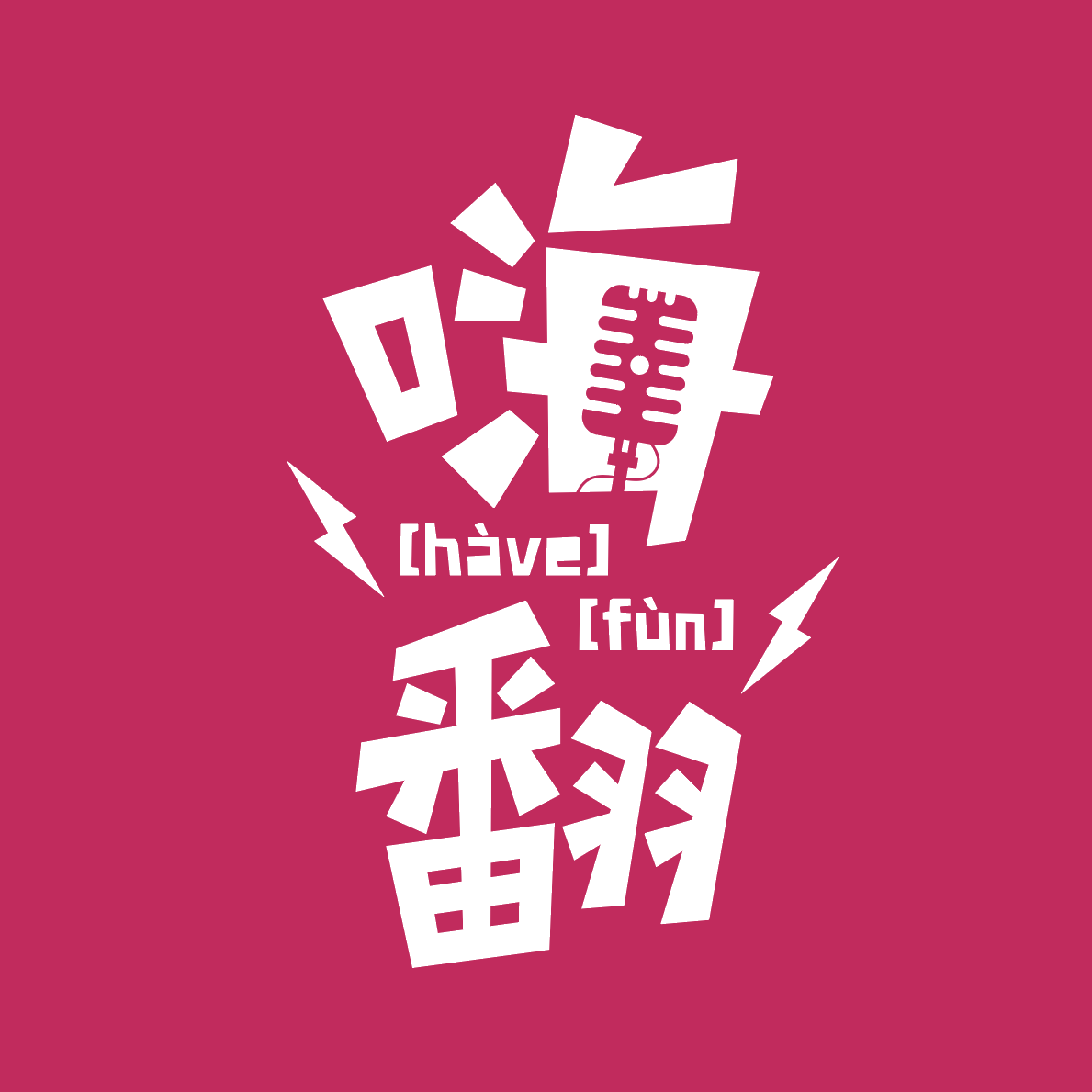 HaveFun Karaoke is more than just a karaoke studio, the rooms are themed and also fitted with drinking games and amenities.

I guess they really want you to have fun!

Besides, if you’re planning to throw a karaoke party, they have rooms that can fit up to 60 pax.

Pro-tip: You should only go to the Bugis outlet on weekend nights if you can hit the maximum number of people in the room, otherwise it’s not worth it to pay for the hourly room rate.

The good thing about the [email protected] outlet is that you can choose between paying the hourly room rate or paying per pax for a 3-hour block.

You’ll have to do a bit of math though to see which one is cheap for your group.

The rates for the Downtown East outlet is the most straightforward and is slightly cheaper than the other two outlets. 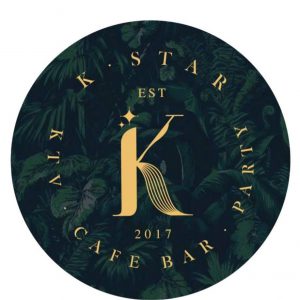 Some of you might appreciate that their day rates or happy hours rates are until 8pm, this means you can chiong a quick session after work and still enjoy the cheaper rates!

K.Star also has VVIP rooms that can accommodate up to 65 pax, so go forth, host your party here!

The same goes for both outlets, try to gather more friends to make sure that you enjoy the best rates!

Remember to drink up after your singing session! Don’t come knocking on our door if you end up with a sore throat…