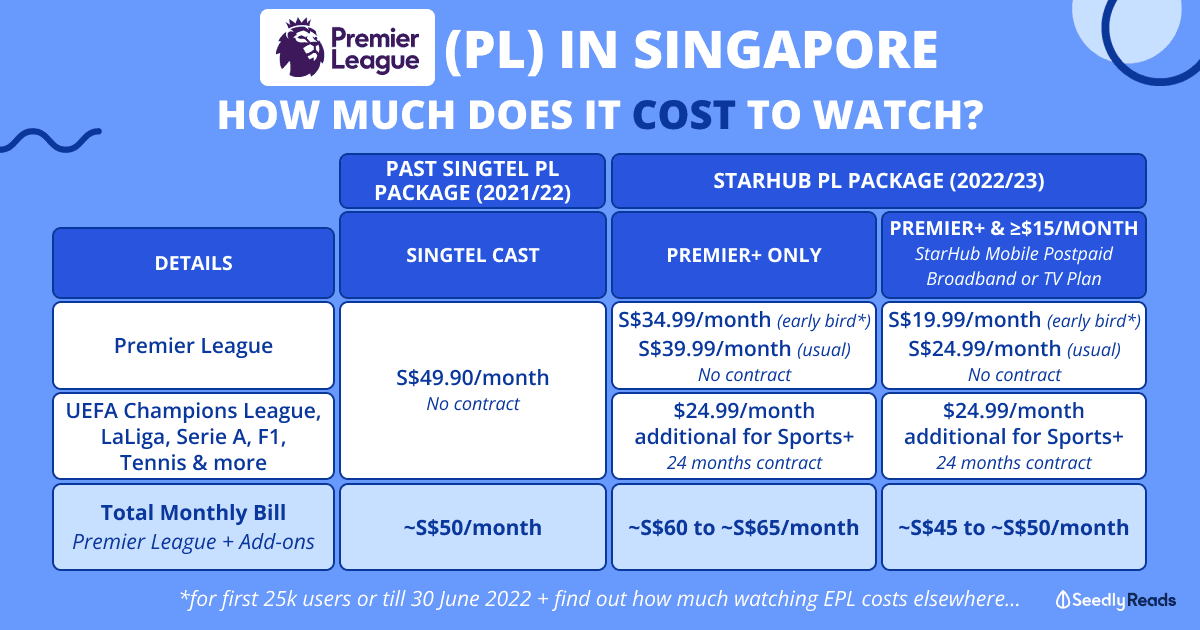 It is the time of the year to make some bad personal finance decisions!

For the longest time, I would stupidly put money behind my favourite team, Arsenal Football Club.

I would describe this as a stupid decision as the last time Arsenal won The Premier League [(formerly known as the English Premier League (EPL)] was in 2003/04, or about 18 years ago.

Not to mention that this year, Arsenal finished 24 points behind 2021/22 Premier League winners Manchester City.

On top of placing this bet, I would almost always subscribe to The Premier League TV/Streaming packages.

And this year is no different.

If you are looking to support your favourite team through thick and thin, here’s a breakdown of how much it costs to watch the Premier League in Singapore!

Note that prices and promotions listed here are subject to change without prior notice and information is accurate as of 8 Jun 2022.

For those of us who grew up on a diet of streaming services like Netflix and YouTube, you’ll feel right at home with this year’s Premier League broadcaster.

Which Streaming Service Has EPL?

You can subscribe to Premier+ on its own to watch on the StarHub TV+ app (available on iOS and Android) or subscribe to it together with other StarHub services for more savings.

For Fibre TV and cross-carriage customers, StarHub has the Premier Pack. More information on this pack will be available in July.

I know this sounds sponsored, but it is NOT! Starhub holds exclusive rights to broadcast The Premier League in Singapore. But thanks to Cross-carriage agreements, you can catch StarHub’s Premier League channel on a Singtel TV set-top box as well. More on that later.

StarHub will be offering the Premier League will be offered as part of a new and dedicated product: Premier+ on the StarHub TV+ app and Premier Pack for Fibre TV.

Customers will enjoy all 380 Premier League games and the pre-season friendlies such as the Standard Chartered Trophy Singapore 2022 happening in July.

Also, the Premier+ packages come without contracts on StarHub. And just like other StarHub TV+ passes, Premier+ can be accessed from any five registered devices and two simultaneous streams with a single subscription.

Not to mention that select games will be aired in 4K Ultra High Definition (UHD).

StarHub will also be rolling out immersive market-first features progressively from now till Q12023, tapping into the full potential of new streaming technology to offer a lively Premier League viewing experience

But, the Premier League matches are all you get as the other competitions like the FA Cup, Carabao Cup, Super Cup or Community Shield Cup are not available on StarHub.

Note that the Premier League channels, Hub Premier, will not be part of the existing Sports+/Sports Pass/Sports d’Lite/Sports Group available today.

The subscription used to cost S$49.90 per month, and you were not required to sign up for any fibre, mobile or pay-TV services.

So is Starhub’s offering an improvement? It depends.

How Much is an EPL Subscription

Here are a few permutations.

1.1 Want to Only Watch the Premier League and Existing StarHub User

StarHub’s new Premier League package makes the most sense if you are an existing StarHub Mobile Postpaid, StarHub Broadband or TV Plan user with a monthly bill of at least S$15 a month.

Since you are already paying for these services, you are only paying S$19.99 per month (usual price S$24.99 per month) to watch the Premier League if you signed up for the early bird offer.

This is much cheaper than Singtel’s S$49.90 a month Premier League 2021/22 package. Although, you were able to get a lot more content like the UEFA Champions League matches with Singtel’s offering.

1.2 Want to Only Watch the Premier League and Non-StarHub User

But, this is still cheaper than Singtel’s S$49.90 a month Premier League 2021/22 package. Granted, you don’t get the Champions League and other add-ons.

However, if you want to watch The Premier League, UEFA Champions League, LaLiga, Serie A, Formula One, Wimbledon and more as an existing StarHub user, StarHub’s package is a little cheaper compared to Singtel’s Premier League 2021/22 offering.

Not to mention that you have to sign a 24-month contract for StarHub Sports+.

Whereas if you wanted to watch The Premier League, UEFA Champions League, LaLiga, Serie A, Formula One, Wimbledon and more, and you were a non-StarHub user, Singtel’s Premier League 2021/22 package made more sense.

In comparison, you only had to pay S$49.90 per month for Singtel’s offering, which had a no-contract offering.

Regardless of the prices, I thought you’ll want to know how to get a cheaper subscription.

So… the only legal way that you can actually get a cheaper subscription is if you paid for it with a cashback credit card and get some cash back. What About Singtel TV Subscribers Who Want to Watch The Premier League 2022/23?

For Singtel subscribers, the Premier League season will be cross-carried on Singtel TV too.

Singtel announced on its website that ‘customers using Singtel TV set-top box, can subscribe to the PL cross-carriage pack directly with StarHub from July 2022 and enjoy the new season of Premier League from August on their Singtel set-top box via CH 102 – 105, similar to how they have been used to.’

This means that as long as you are on a plan with Singtel, you have the option to watch the Premier League on your Singtel TV set-top box.

And according to Starhub’s website, you can sign up for the Cross-carriage service on Singtel from 8 July 2022. But, more information about this arrangement will only be released in July 2022.

But in my opinion, unless you were really a hardcore Singtel fan, there is no reason to go for Singtel’s cross-carriage Premier League package.

Is it Expensive for Singaporeans to Watch EPL in Singapore? How Can I Watch EPL Cheap?

That aside, how expensive is it to catch the Premier League in Singapore?

In Singapore, the Median Gross Monthly Income from work, inclusive of CPF contributions of full-time employed residents, is S$4,680 (based on the year 2021).

This means that the take-home pay for the 50th percentile of people in Singapore is S$3,744.

That means that the cheapest subscription plan for The Premier League (S$35 per month) is only 0.9 per cent of take-home pay.

This may not seem like a lot, but we need to remember that the S$3,744 figure is for the midpoint mark for salary in Singapore. This means that about 50 per cent of people in Singapore earn less than the median salary.

Not to mention that it will add up to about S$420 a year, which is not cheap.

FYI: $35 is easily my lunch and dinner budget for two and a half days.

You can see why so many people turn to illegal streams to catch the Premier League, right?

NOT that I’m condoning it.

In fact, this is what Singaporeans have to say about a Premier League lawyer threatening to come down harder on illegal streaming of the Premier League.

What’s the Cost Of Watching Premier League Around The World? Can I Watch EPL Free?

The impression that most of us get when it comes to watching football in Singapore.

Is that it’s a really expensive pastime.

This is why we usually see people gathering at bars, McDonald’s or the neighbourhood SAFRA for big matches, as most of us cannot afford the luxury of watching the Premier League in the comfort of our homes.

I remember watching the UEFA Champions League final at a bar, sandwiched between sweaty men in Liverpool jerseys.

While it was a truly amazing feeling to be able to catch the match.

I imagine that it would be so much better to be able to watch it at home with a couple of friends over a dram of whiskey.

So, how expensive is watching football in Singapore?

We made a little comparison to find out:

There are a few factors that are driving up the Premier League broadcast rights of Singapore.

The main factor being Singapore is a relatively small market, with the latest census from SingStat stating that there are only 5.45 million people in Singapore:

This means that broadcasters have more difficulty negotiating for a better deal, as Singapore does not enjoy the cost advantages derived from economies of scale.

For example, our neighbouring Malaysia has a population of 32.7 million, which is six times more than Singapore’s!

Not to mention that with the Premier League growing in popularity, revenue from broadcasting deals is steadily increasing.

According to British National newspaper The Times:

The Premier League’s income from broadcasting deals will break the £10 billion (~S$17.27 billion) barrier over the next three seasons, with overseas rights worth more than domestic for the first time, clubs have been told.

Thus, it is likely that StarHub had to pay more to secure the rights for The English Premier League for the next six seasons.

Also, according to an interview with The Straits Times:

StarHub declined to disclose how much it paid for the deal. In 2007, it reportedly paid $250 million for a three-year contract, before Singtel was said to have forked out $400 million for rights from 2010 to 2013.

Starting from 10am today (9 Jun 2022), you can sign up for Premier+ at www.starhub.com/premierleague or at StarHub Shops, while existing TV customers can subscribe via the My StarHub app.

But no worries, you will only be billed from 6 Aug 2022 when the Premier League starts.