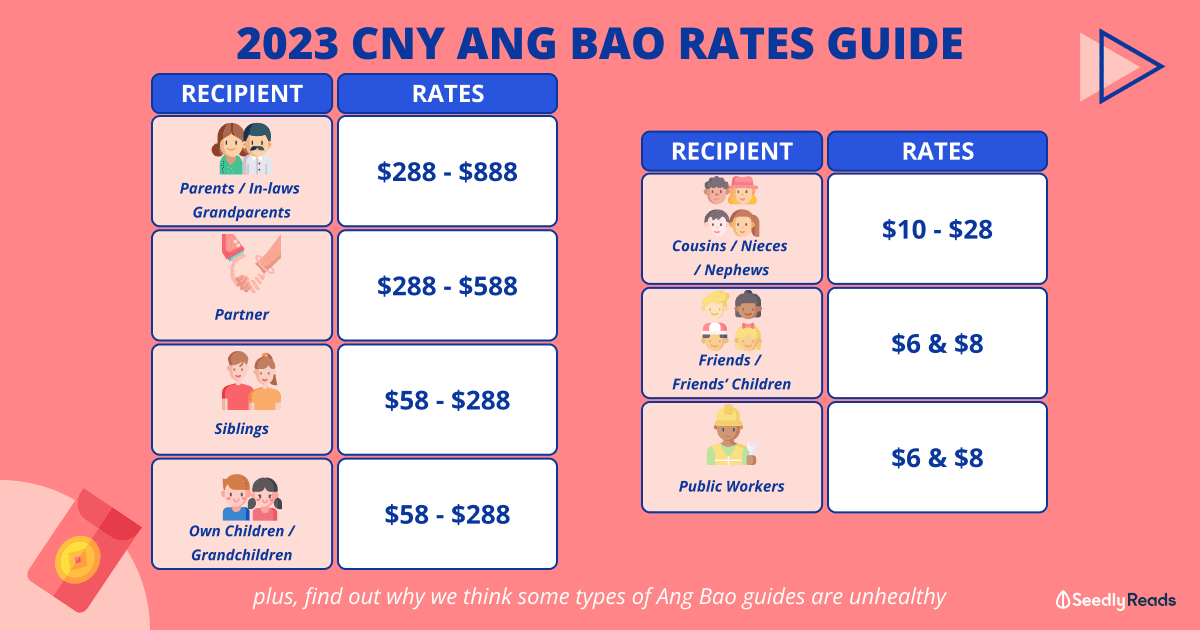 The Chinese have a meaningful tradition where married people will give a red packet (ang bao) to the unmarried (mainly children).

The actual significance of this tradition is mainly on the red packet, and the money that comes in it is secondary and an add-on bonus for the recipient of the ang bao.

The meaning behind giving red packets during Chinese New Year is a way for married working adults to share their wealth and blessings with the young ones.

On top of that, the colour red in Chinese tradition signifies good luck and happiness, while the money in the red packet signifies the gift of fortune and luck.

So… How much money should you be giving in your CNY Ang Bao?

While the gifting of an Ang Bao is really meaningful.

Things get a little complicated when money gets involved.

After doing our research and polling the team, we came up with this guide: 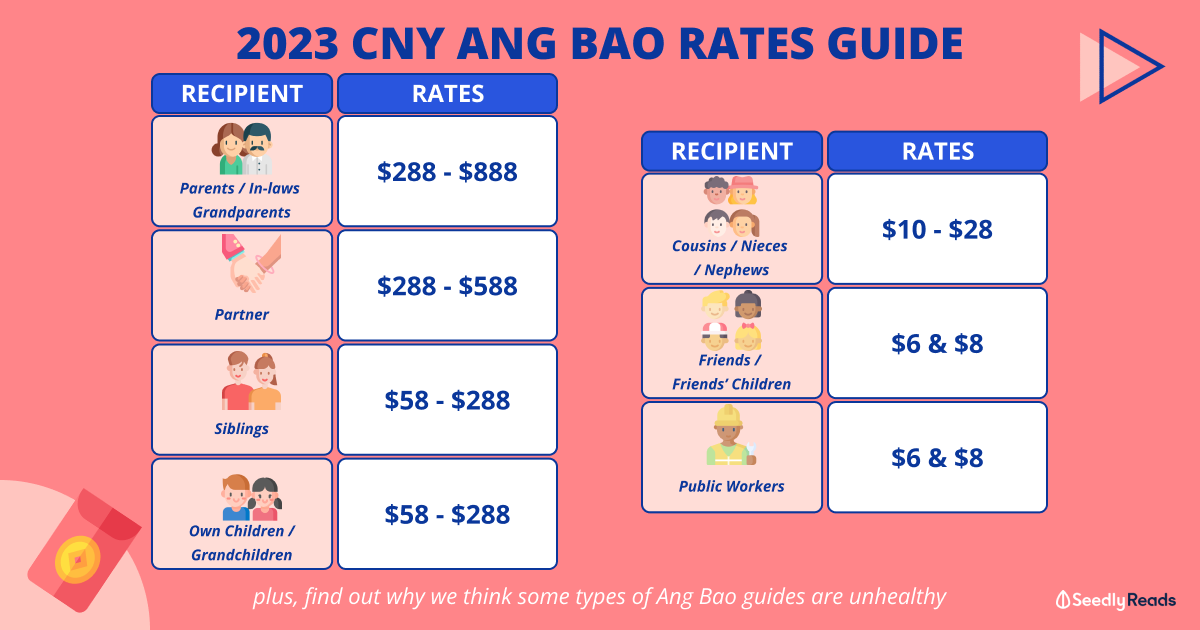 Disclaimer: This table is just a suggestion there is no hard and fast rule that you have to give at least $XX amount in your ang baos. It should depend on your financial situation, and you should always give within your means.

Should I Peg The Ang Bao Rate To The Inflation Rate?

For those who are a little more into finance, the inflation rate may play a key role in determining the Ang Bao rate during Chinese New Year.

Let’s take this and factor in the Consumer Price Index or overall inflation in Singapore from 2003 to 2022:

FYI: The CPI is a measure of general price levels in Singapore and is released every month by the Singapore Department of Statistics (DOS).

Determining the “CNY Ang Bao Rates” For 2023: How Much Hongbao To Give Parents, Spouses, Siblings, Children and More

Well… we did a little research online and averaged the rates we found.

And also polled the Seedly team to get a feel for what they think is the ideal CNY Ang Bao rate.

After that, this is what we got:

Traditionally, only married people will give ang baos to the younger ones or those who are single within the first 15 days of CNY.

As for colours, most ang baos are red in colour as the colour red symbolises luck, joy and happiness. Colours like pink and gold are fine too but avoid dark-coloured ang baos at all costs.

This may vary from family to family, so there is no hard and fast rule per se.

Can I Give Angbao if I’m Not Married? Can Angbao be Given Before CNY?

Not to mention that wedding ang baos are given to newlyweds to help the couple with costs or given to the recipient on their birthday.

Can Unmarried Give Ang Bao to Parents? Do You Give Red Packets to Parents?

By extension, there is no hard and fast rule that singletons cannot give ang baos to their parents.

So feel free to bless your parents with an ang bao this Chinese New Year! I’ll be doing it, and I’m sure my parents will be happy to receive it as an expression of my love and gratitude towards them

Is There a Minimum Ang Bao Amount to Give? What Can You Not Put in a Red Envelope?

No hard and fast rule says that you have to give at least $XX amount in your ang baos.

But, you should refrain from giving ang baos with amounts that end in odd numbers, like $5, or $7, as according to Chinese tradition, odd numbers are not auspicious.

Do avoid putting in coins as well.

Instead, you should give ang baos with amounts that end in 8, like $8, $18, and $28 etc., as 8 sounds like prosper in Chinese. In addition, the number 8 in Chinese culture symbolises wealth and success.

Ang Bao rates are, however, dependent on hierarchy.

As seen in our table above, those who are closest to you will receive a higher ang bao rate.

That said, it should also depend on your financial situation, and you should always give within your means.

How To Send E Ang Pow

Also, if you want to send an e-ang pao this year, check out our guide: 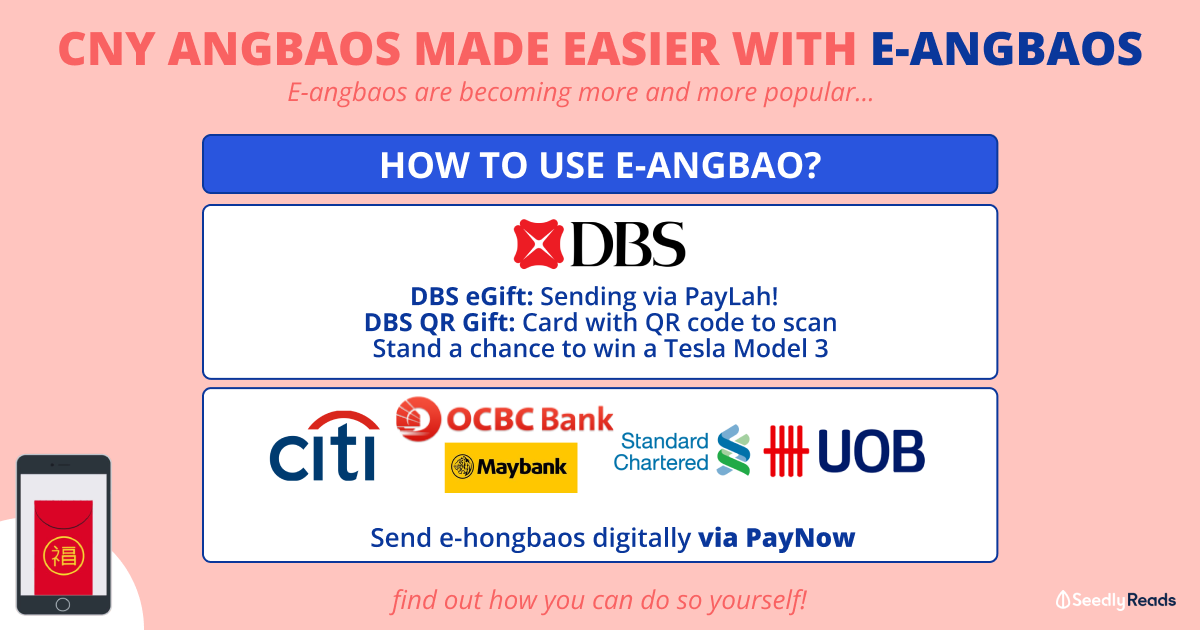 While it is convenient to come out with a guide for everyone to follow, maybe it is time to take a step back and reflect on the values that will be translated down to the next generation.

Some of the Ang Bao guides we see circulating online can lead to unhealthy values being passed down. 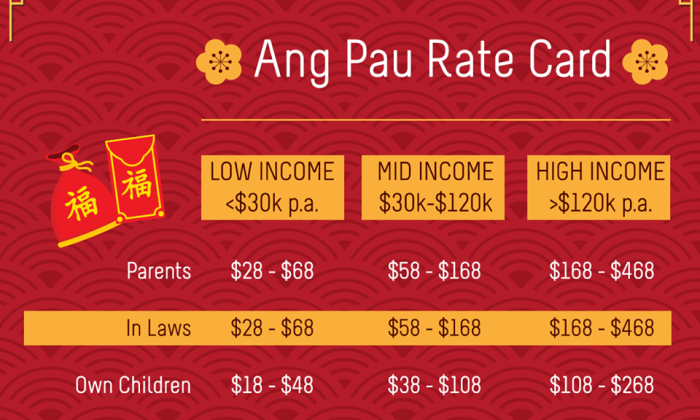 Judging your relative based on income bracket is definitely something to avoid, and the meaning behind this meaningful tradition should not be lost in translation due to money.

Besides wrapping ang baos for Chinese New Year this year while enjoying some CNY games, good CNY food and tossing some yusheng for good luck!

If you’re the lucky one who’s still receiving ang baos this year, you might wanna find out how you can maximise this extra money too. 😉