China Tech Stocks Crashing! What Should You Do? 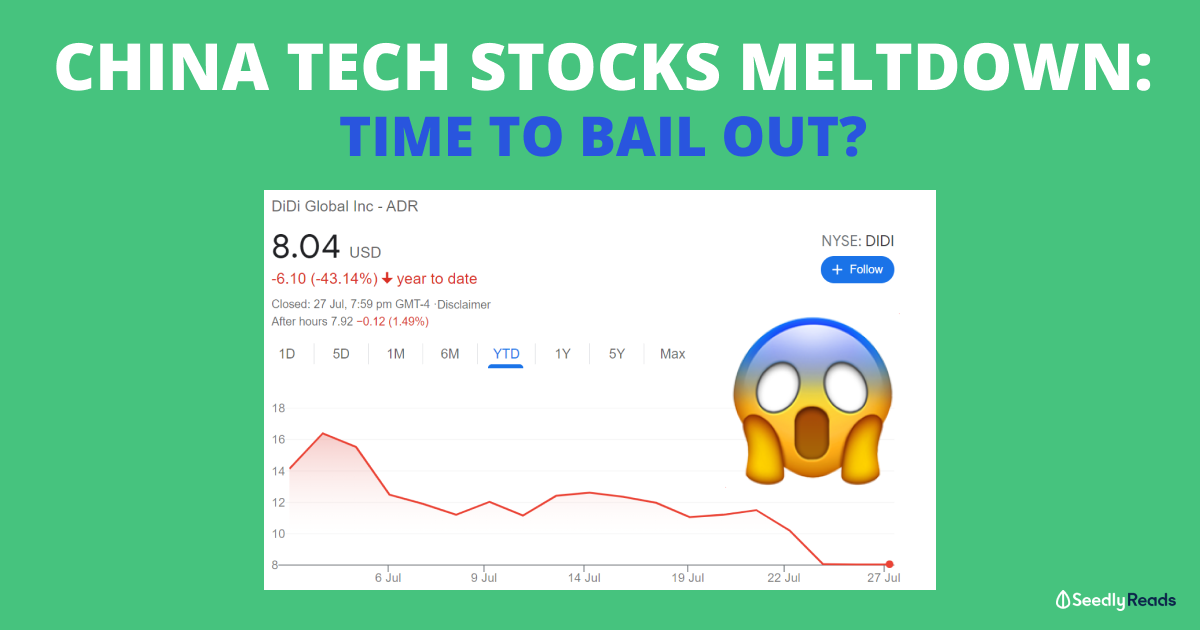 China Tech Stocks Crashing! What Should You Do?

By now, you would have seen some of the scary headlines involving China stocks.

“$831 Billion Selloff in China Tech, Including Didi, May Not Be Over” — Bloomberg

If you own stocks in the Chinese technology giants such as Alibaba, Tencent, or Meituan, you could be gripped with fear.

And you might be even tempted to “sell first, talk later”.

But before you panic and press the “Sell” button (only to regret later), let’s take a step back and look at the situation rationally.

What’s Up With Chinese Tech Stocks?

Back in November 2020, Ant Group, the fintech affiliate of Alibaba, saw its Shanghai and Hong Kong IPO suspended when regulators announced an investigation days before it was about to list.

Alibaba was separately hit by a US$2.78 billion anti-monopoly fine after an investigation by China’s market watchdog found the company abusing its dominant market position.

Other companies under scrutiny by Chinese regulators for allegedly flouting monopoly rules include Tencent, Bytedance (owner of social media app TikTok), and the finance arm of food delivery platform Meituan.

More recently, Chinese ride-hailing giant Didi was in the limelight after going public in the US.

China’s cybersecurity watchdog apparently suggested that Didi delay its IPO to conduct a thorough self-examination of its network security.

But the company went ahead with its listing, ignoring Beijing’s order.

According to Bloomberg, Didi could now face unprecedented penalties following its controversial IPO.

The latest salvo from the Chinese government is at the education sector.

China is considering asking tutoring companies to turn non-profit, with an aim to curb soaring educational costs that have discouraged families from expanding.

Should You Avoid Chinese Stocks Now?

From the above situation, we can see that the political risk of investing in China stocks has played out.

The Chinese government plays a significant role in China’s economic growth by allocating resources, regulating financial services and institutions, and even providing preferential treatment to particular industries or companies, according to Alibaba’s regulatory filing.

Some of the rules by the government may not be published on a timely basis or at all.

They may also have a retroactive effect, which means that companies may not be aware of their violation of such policies and rules until after the violation has happened.

China clearly differs from the Western style of democracy that we are used to.

So investors in China stocks should be comfortable with this unique risk surrounding the country.

In my opinion, the crackdowns we are seeing in China at the moment is a short-term risk.

There could be more volatility with Chinese stocks in the coming weeks and months as the government tightens up its regulations further.

However, over the longer run, I believe proper regulations help maintain an orderly and healthy development of the industries involved.

The businesses of incumbents like Alibaba and Tencent may even be strengthened with the regulation.

New laws may deter startups that do not have the necessary resources to comply with the rules from competing with the incumbents.

Consumers may also gravitate towards the names they recognise instead of switching to a newcomer.

We have to look at investing in stocks from a business perspective and not allow our judgement to be clouded by the volatility in their share prices.

Investors should ask themselves these important questions before doing anything irrational:

China has the world’s largest population with a growing middle class, and the country holds plenty of growth opportunities for long-term investors.

Valuation wise, many leading Chinese tech stocks are cheaper than their US counterparts, even though they have potentially larger addressable markets and growth prospects.

How to Profit From the Panic

“The future is never clear; you pay a very high price in the stock market for a cheery consensus. Uncertainty actually is the friend of the buyer of long-term values.”

If you believe the Chinese stock sell-off is a temporary issue and you understand the risks involved, it might be a good opportunity to scoop up their shares on the cheap.

But remember to position-size your exposure to the Chinese stocks according to your risk tolerance.

And only buy their shares after understanding their business fundamentals thoroughly.

… you can always consider buying exchange-traded funds (ETFs) that have stocks listed in Hong Kong or China.

I would avoid ETFs containing American Depository Receipts (ADRs) like the US-listed Alibaba as it adds another layer of risk with the delisting bill in the US becoming law.

The KraneShares CSI China Internet ETF (NYSEARCA: KWEB) would be such an ETF, with seven of its top 10 holdings being ADRs.

That’s what we have here at Seedly, where you can participate in a lively discussion regarding stocks and everything money!

Disclaimer: The information provided by Seedly serves as an educational piece and is not intended to be personalised investment advice. ​Readers should always do their own due diligence and consider their financial goals before investing in any stock. The writer owns units in Lion-OCBC Securities Hang Seng TECH ETF. Image credit on cover artwork: Google Finance