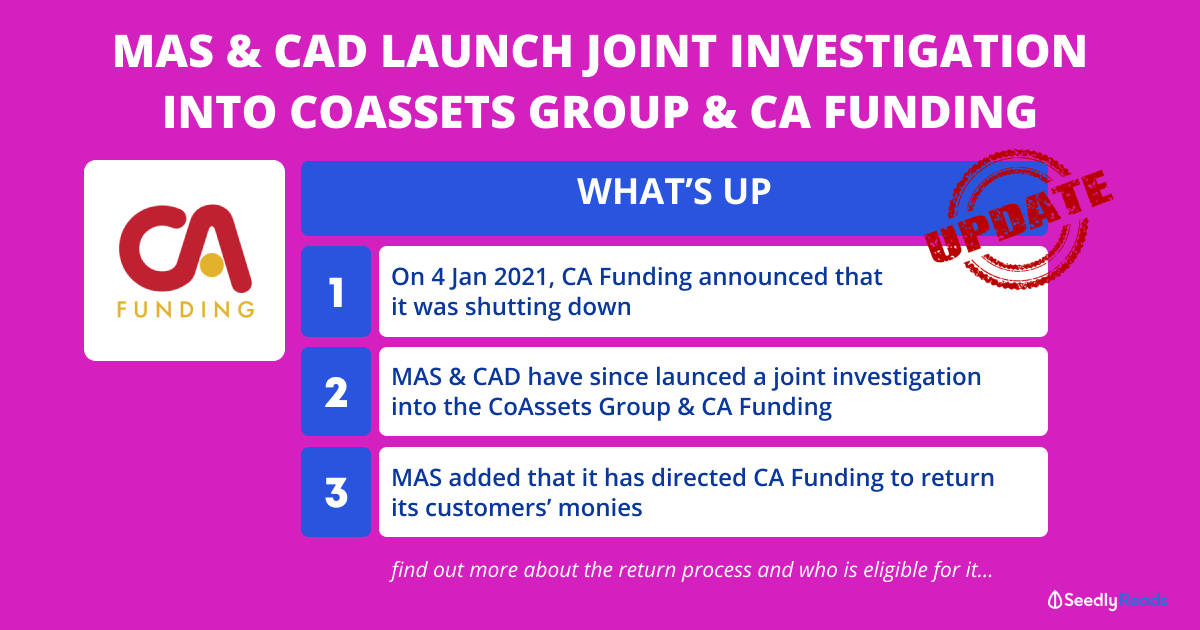 The Commercial Affairs Department (CAD), and the Monetary Authority of Singapore (MAS) announced that they have launched a joint investigation into various companies under CoAssets Ltd (CoAssets Group Companies) for possible offences under the Penal Code (Cap. 224) and the Securities and Futures Act (Cap. 289) (SFA).

Out of this group, the spotlight is being shone on Singapore based peer-to-peer lending (P2P)/Crowdfunding lending platform CA Funding Private Limited (CAFPL): a capital markets services license that is regulated by MAS.

This development comes on the back of an announcement by CAFPL on its website on 4 January 2021 that it will be shutting down:

MAS added that it will be ‘closely monitoring’ CAFPL’s cessation plans to make sure that investors who invested on CAFPL’s platform are treated fairly.

Here are more details of the repayment process.

According to CAFPL, its Promissory Notes (PN) investors rights are protected under Clause A of the security deed states that:

“Under the PN, Chargor is required to pay to the Payees (whether directly or through the intermediary) certain sums on or by the stipulated dates).”

In addition, Under Clause 4.3 of the Promissory Note, it states that:

“Payment shall be made by the Issuer via bank transfer into one account maintained with a local bank as may be notified by CAFPL to the Issuer. For avoidance of doubt, all of the Issuer’s obligations under this Note to any and all of the Payees shall be discharged upon payment of the relevant sums into such account. The Issuer shall be entitled to require presentation of the Promissory Note prior to payment. For the avoidance of doubt, the obligation to pay under this Note shall only be deemed to be discharged upon the bank transfer having cleared and the amounts payable being received in the bank account notified by CAFPL on the relevant Payment Date, Early Redemption Date or another applicable date.”

In other words, CAPFL is reassuring its investors that they ‘can expect to receive their repayments for performing projects even with the cessation of the platform.’

The company added that those who invested in crowdfunding projects that are doing well can expect to be repaid according to the designated schedule.

Whereas for the projects that have their repayments delayed, the company will keep watch of the situation and keep its investors updated.

However, there is a distinction between the regulated and unregulated PNs.

CA Funding has stated that it will be helping ‘crowdfunding investors of PNs facilitated by CAFPL and sold on CAFPL’s platform’ get back their money.

The table below shows which PNs fall into this category:

However, this does not include the PNs sold by unregulated CoAssets subsidiaries that were not facilitated by CAFPL.

CAFPL added that those investors had previously expressed interest in the dealings of the CoAssets Group, and had given CAFPL permission to share their information with the unregulated subsidiaries.

However, if you have any questions about the PNs not facilatted by CAFPL, you can email them at: [email protected].

If you recall, Seedly is one of the first platforms to raise suspicion about CoAssets on 30 December 2020.

Here is a recap of what happened.

And unfortunately for retail investors who have vested money with CA Funding Pte. Ltd (formerly CoAssets Pte. Ltd), a debt-based crowdfunding platform based in Singapore – it seems to have gotten worse.

Note: CoAssets was rebranded to become CA Funding back in Nov 2020 to differentiate between the Monetary Authority of Singapore (MAS) regulated subsidiary and the rest of the CoAssets Group. However, as the name CoAssets is more widely known, we will be referring to CA Funding as CoAssets.

According to Tech in Asia, the company has allegedly winded up and transferred about US$30 million (S$39.8 million) of its debt to Hong Kong-based Sunfits Investments Limited; a little known debt recovery firm.

In a note that would be troubling to investors, Sunfits stated that it could not collect on the debt as there is no ‘visibility’ on any the assets.

As such, the ‘firm is insolvent. While some earlier investors got back their money, hundreds more will likely see their holdings evaporate entirely.’

As we speak, affected investors have been filing police reports in a bid to recover the investments held with CoAssets.

What can investors who have been affected do?

To understand the situation, we need to go back to the formation of CoAssets in 2013.

The company was founded by co-founders Getty Goh and Dr Seh Huan Kiat, as a P2P/Crowdfunding lending platform.

This online platform allows retail investors to pool their money together to offer loans to small and medium-sized enterprises and property developers who list their projects on the company’s platform.

Rather than owning a stake in the business, investors’ money is loaned out. In turn, investors earn a return via interest payable on the loan.

Basically, the crowdfunding platform was created to serve the needs of smaller businesses with lower credit ratings.

These companies are generally unable to obtain loans from banks that deem these types of loans to be too big of a default risk.

But, this default risk could be somewhat managed if the crowdfunding platform has a diversified portfolio of loans.

As such, investors’ monies would be spread out and the risk reduced.

Also, another safeguard put in place is that CoAssets investors’ funds were held in a trust account.

Should the company become insolvent one day, the funds will continue to be handled escrow agency Vistra Trust. Loan agreements in place will not be dissolved and a reputable agency will be assigned to fulfil the service duties.

The company did well initially as it was listed on the Australian Securities Exchange (ASX) back in 2016.

In 2017, the company managed to obtain a capital markets service (CMS) licence from the Monetary Authority of Singapore (MAS).

However, it seemed that things were a bit rocky as the company announced a voluntary delisting from the ASX in Jun 2020, citing:

But after a while, the company, pivoted and moved into other Fintech related verticals and began offering financial products like Promissory Notes (PN).

According to Investopedia, a Promissory Note (PN) is a type of loan that:

PNs issued by companies are rather risky as unlike banks and traditional financial institutional lenders that are offering loans, these companies brokering the PNs do not have the organisational capacity or loan volume to minimise the risk.

Potentially, the investor may get outsized returns. But, it is dependent on whether the payee does not default on the note.

In an interview with Tech in Asia, Lawrence Lim highlighted the main issue with the PNs offered by CoAssets:

Lim states that he attempted to put a stop to these practices as COO but was powerless to do so due to CoAssets’ actions.

In response, Goh has denied these claims and stated that he has refunded some of the affected investors out of his pocket.

However, many CoAssets investors who have invested in the PNs have claimed that they have not been repaid at the time of writing.

You can check out an example of this in the above-mentioned thread as Getty Goh has personally replied to some of the comments. 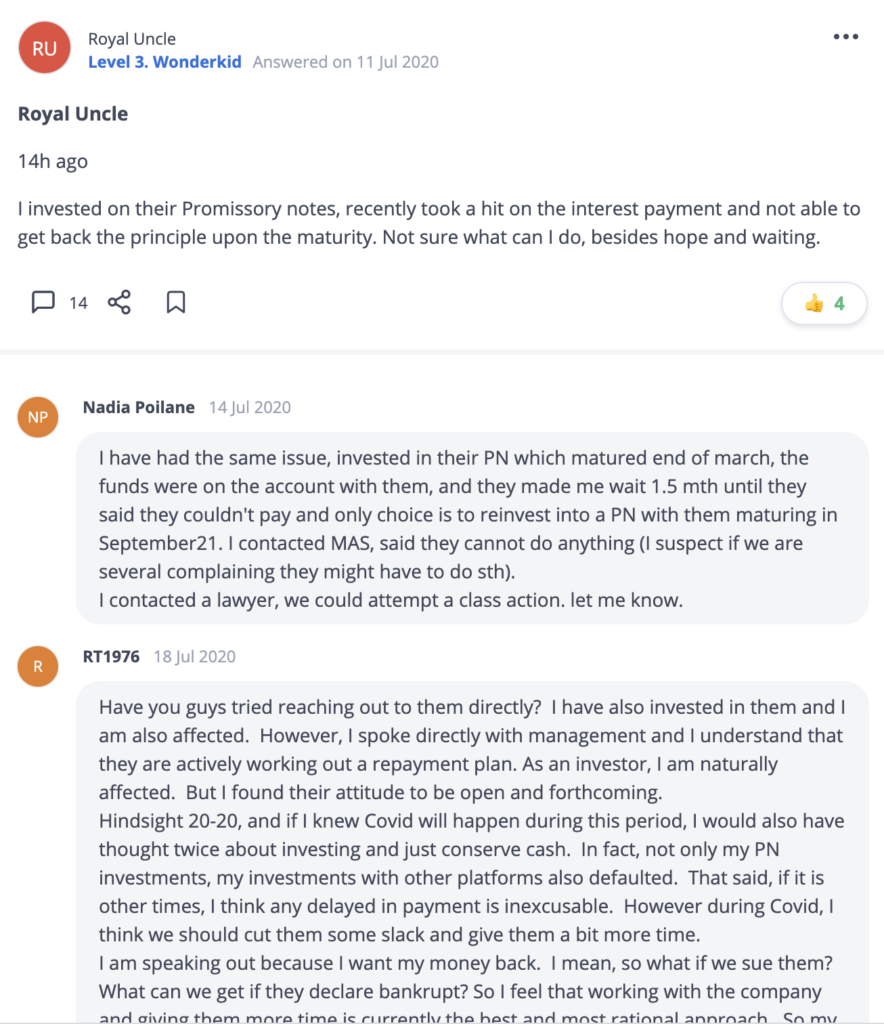 He is now acting as the CEO of CoAssets.

But, there appeared to be a light at the end of the tunnel for CoAssets and investors.

As early as 2018, there were talks of a merger between CoAssets and DWG group: one of the biggest real estate brokerage firms in Singapore. DWG has 10 branches globally located in Japan, Malaysia, Thailand and England.

With this news, CoAssets soothed its investors’ worries by informing them of the potential deal.

At the start of this year, Goh managed to convince investors to stay on by claiming the PNs were contractually guaranteed by DWG and its director Denka Wee in a contractual agreement.

However, investors who were hanging on to the hope of the capital guarantee with DWG were left reeling earlier this month (Dec 2020) after it was uncovered that DWG voided the agreement citing “suspicious activity” after a review of CoAssets documents.

As such, It appears any deal between DWG and CoAssets is not happening.

For now, the situation is still unfolding.

For a complete account of the situation, you can refer to the full Tech in Asia article.

DWG and Denka Wee (Director of DWG) will challenge and dispute all claims made by Mr Getty Goh on his personal Facebook’s comment and post on 29th Dec 2020. DWG described the post as false and defamatory, and “impugned its integrity”. DWG and Denka Wee will be filing a police report regarding the matters above and will seek full legal action against the personnel and his comments. DWG and its related personnel reserve all rights to take legal action for any act of libel. DWG has placed utmost importance on safeguarding its interest and takes any false allegations seriously to the contrary.

Many individual investors have also made police reports against CoAssets, which Getty Goh still runs as the CEO.

A MAS spokesperson has also stated that it “is aware that police reports have been lodged against CoAssets.”

The spokesperson added that MAS will take necessary action if CoAssets has been found to have breached regulations.

We have also reached out to current CoAssets staff for clarification and will update the article if there are any updates.

If you are an affected investor, here is what you can do.

What Affected CoAssets Investors Can Do

At the moment, a group of investors who met on Seedly are gathering to take collective action.

Lawrence Lim the former COO of CoAssets is also actively helping the group out.

They have gathered in a CoAssets clients discussion group and a Telegram channel to coordinate efforts.

Got Any Thoughts on CoAssets?