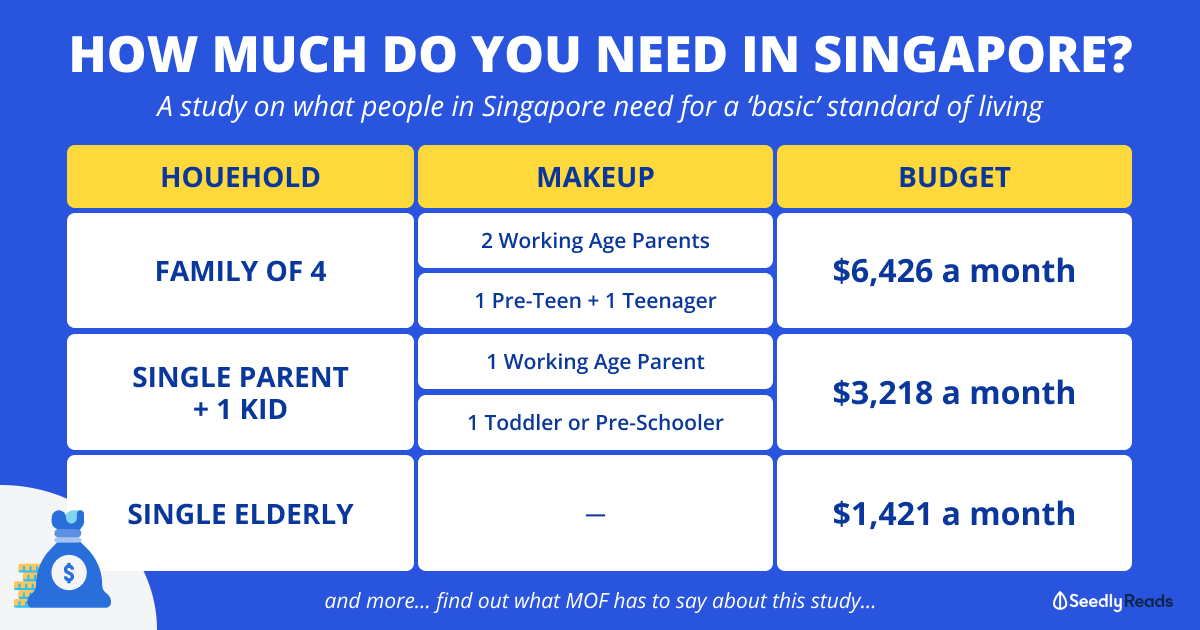 If you ever wondered how much you need to support a basic standard of living in Singapore, you might want to take a look at this study:

This study entitled: What People Need in Singapore: A Household Budget Study (2021) was created with the express goal to determine ‘how ordinary Singaporeans think about what constitutes basic needs in Singapore today and determines the household budgets necessary to meet these needs.’

In addition, the researchers are zeroing in mainly on two types of households, parents with two children (aged 7-12 and 13-18) and single parents with one child (aged 2-6).

Not to mention that the researchers have updated the numbers for a previous May 2019 MIS study which examined how much elderly persons aged 65 years and older and single adults aged 55-64 years old need for a basic standard of living in Singapore.

Here are the study’s key findings and our breakdown of them.

Basically, you can say that this study is about finding out what Singaporean households, in general, think about what the basic standard of living should be and finding out how much is needed to attain it.

Here is an overview of the key findings of this study:

Who Are The Authors of This Study?

Well, you might be thinking, who are the ones behind this study?

The study was produced by a group of researchers and academics from the National University of Singapore (NUS) and Nanyang Technological University (NTU):

NG Kok Hoe is Senior Research Fellow and Head of the Case Study Unit at the Lee Kuan Yew School of Public Policy, where he also leads the Social Inclusion Project, a research programme dedicated to analysing how public policies shape opportunities for participation. His research is concerned with income security, minimum income standards, housing policy and homelessness. He led the first nationwide street count of homelessness in Singapore in 2019 and is co-editor of the book They Told Us to Move: Dakota—Cassia (Ethos Books, 2019).

TEO You Yenn is Associate Professor, Provost’s Chair, and Head of Sociology at the Nanyang Technological University. Her research focuses on poverty and inequality, governance and state-society dynamics, gender, and class. She is the author of Neoliberal Morality in Singapore: How Family Policies Make State and Society (Routledge, 2011) and This is What Inequality Looks Like (Ethos Books, 2018).

NEO Yu Wei is Senior Research Fellow and Deputy Director at the Social Service Research Centre at the National University of Singapore.

Ad MAULOD is a cultural anthropologist and Senior Research Fellow at the Centre for Ageing Research and Education (CARE), Duke-NUS Medical School, Singapore.

Stephanie CHOK is an independent researcher who has worked and volunteered with NGOs in Singapore for more than a decade. She obtained her postgraduate degrees in development studies and her PhD examined Singapore’s labour migration regime for temporary low-paid migrant workers.

WONG Yee Lok is Research Associate at the Social Inclusion Project, Lee Kuan Yew School of Public Policy. She holds a degree in Economics and Finance from the University of Hong Kong.

These researchers have banded together to produce research using the Minimum Income Standard (MIS) research method which originated in the United Kingdom.

They are also part of a wider network of researchers around the world who are producing MIS-based research.

The MIS refers to a research method establishing what incomes households require in order to reach a ‘minimum’ standard of living, appropriate for the place and time in which they live.

It is reached by talking in-depth to groups of members of the public, asking them to agree what goods and services households require in order to have such a living standard.

The results are used to construct minimum budgets for different household types. MIS is about more than just what is needed to survive and refers to what is required to be part of society, according to definitions produced in each country by members of the public.

Standard of living is defined as one in which Singaporeans can afford housing, food and clothing, and also have opportunities for education, employment and work-life balance, as well as access to healthcare.

It should also enable a sense of belonging, respect, security and independence and afford the choice to participate in social activities and cultural and religious practices.

For this study, the researchers surveyed a total of 196 participants who took part in 24 focus groups. 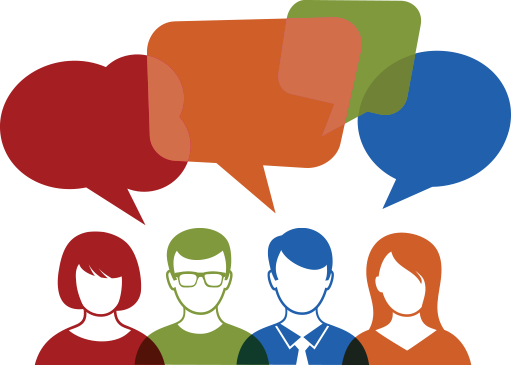 diverse in terms of gender, ethnicity, and socioeconomic background (using education level and housing type as proxy). Socioeconomic diversity was important for avoiding final budgets that were either extravagant or inadequate.

Here is the profile of the participants:

However, the MOF (via The Straits Times) pointed out that:

the methodology used to arrive at the Minimum Income Standard (MIS) is highly dependent on group dynamics and the profile of the participants.

wbith most participants having post-secondary education and 15 per cent living in private properties, the findings expressed may $not be reflective of the circumstances of the lower-income families situation and understates the support given.

In my opinion, both sides have a point.

But, I would like to point out that the findings from this study were derived from consensus-based focus groups as:

each item on the final list resulted from the process of checks and consensus through several waves of focus group discussions. In other words, all items included in the final budget are those that people have been able to agree are needs for meeting the definition of basic standard of living.

Although the findings might be a bit skewed towards the higher educated and those who lived in private properties, you cannot deny that the lower-income families’ voices were heard for this study, and some form of consensus was reached.

In my opinion, the MOF and the researchers have very different viewpoints on this study.

For MOF, they are looking at it from a cost of living perspective and would disagree that this is the amounts quoted in this study are what Singaporeans need to meet their basic needs.

Whereas the researchers are looking at it from a quality of life perspective which is more aspirational. This in my opinion is not too unreasonable since Singapore is one of the richest developed countries in the world and we should aspire for better.

Thus, the results of this study should be viewed with this in mind.

MOF has also come out to state on Channel News Asia (CNA) that it is fully aware of how Singaporeans’ aspirations are evolving with the times and is also continually working to support those in need.

Nonetheless, I would think that this research is worth studying and debating more and would help policymakers with their decisions.


Source: What people need in Singapore: A household budgets study

(1) Restaurant food is included in the recreation and entertainment budget for the single and partnered parents’ households.
(2) Tuition and other fees include playgroup fees, childcare centre fees and kindergarten fees for children aged 2–6; and primary school
miscellaneous fees, secondary school and miscellaneous fees, and private tuition fees for children aged 7–12 and 13–18.
(3) Social support services refer to student care for children aged 7–12.
(4) The median gross monthly work income of full-time employed residents aged 15 and above including employer CPF contributions was $4,534
in 2020 (Ministry of Manpower, 2021).

Let’s break it down further.

For a family of four, their household budget can be broken down like this:

Unsurprisingly, a household of four with two parents and two kids spend a substantial amount on housing purchase (purchase and rent), education, healthcare and childcare.

If you exclude these expenses from the household budget, you can lower it by about 28 per cent.

But, for single-parent households, housing is the biggest expenditure. For context, they are spending about two times more on housing compared to food.

If you remove these costs, the budget for single-parent households can be reduced by up to 39 per cent.

The researchers have also updated their previous study about how much the elderly need to meet their basic needs after taking into factors like inflation.

The single elderly aged 65 years and older in Singapore spend the most on:

I can imagine the budget breakdown for the elderly will not be too different from the younger single people living in Singapore as they do not have to contend with the cost of raising a child in Singapore.

4. $2,906 a Month (Including 17% Employer CPF Contributions) Is a Reasonable Starting Living Wage in Singapore

The researchers suggest that a reasonable living wage in Singapore to attain a basic standard of living is $2,906 per month (inclusive of Central Provident Fund (CPF) contributions). This is because the salary figure given references the median gross monthly work income of $4,534 in 2020.

Thus, it would not be a stretch to assume that this wage is taking into account that you can use your CPF for housing expenditures.

According to the study, each household member on average will need about $1,600 a month to meet their basic needs.

This is based on the average budget for married couples with two children or a single parent with one child after adjusting for taxes and general means-tested benefits that most are eligible for.

Thus, parents will have to earn an average of $2,906 a month to cover expenses for their children.

So basically, if you have kids, you will need to earn more to support your children and achieve that basic standard of living for the whole family.

But if you are single, you can probably get by spending about $1,600 a month and earning less.

As such, you can the researchers are proposing that this $2,906 a month figure can be a benchmark for a reasonable living wage in Singapore.

Although the median salary for all workers above the age of 15 in 2020 is 56 per cent more than this benchmark, the progressive wage model salaries are still lower.

But then again, this $1,600 a month expenditure figure is similar to what the average Singaporean household spends.

If you look at the latest Household Expenditure Survey which was produced in the year 2017/18 by the Singapore Department of Statistics (DOS):

MOF has argued that the $1,600 a month figure that the researchers have quoted is in ‘excess of basic needs for an average household’ as the average expenditure per household member in Singapore is $1,628 per month.

5. 30 Per Cent of Working Households in Singapore Do Not Earn Enough To Meet These Needs

Another important point that the researchers wanted to highlight is that about 30 per cent of working households in Singapore do not earn enough to meet this basic standard of living.

This is due to the fact that according to DOS statistics for Singapore in 2020, the average salary per household member was $1,609 for the third decile group (i.e. 21st to 30th percentile).

But on balance, MOF has stated that there:

are errors in certain assumptions made in the report, which under-state the amount of government subsidies and financial support received by low-income families.

The debate rages on. But, I’m glad that this study is out as hopefully, it would spur more conversations about what a living wage in Singapore is.

This would provide a good starting point for policymakers to figure out how to uplift the lower-income families in Singapore to benchmarks like this.