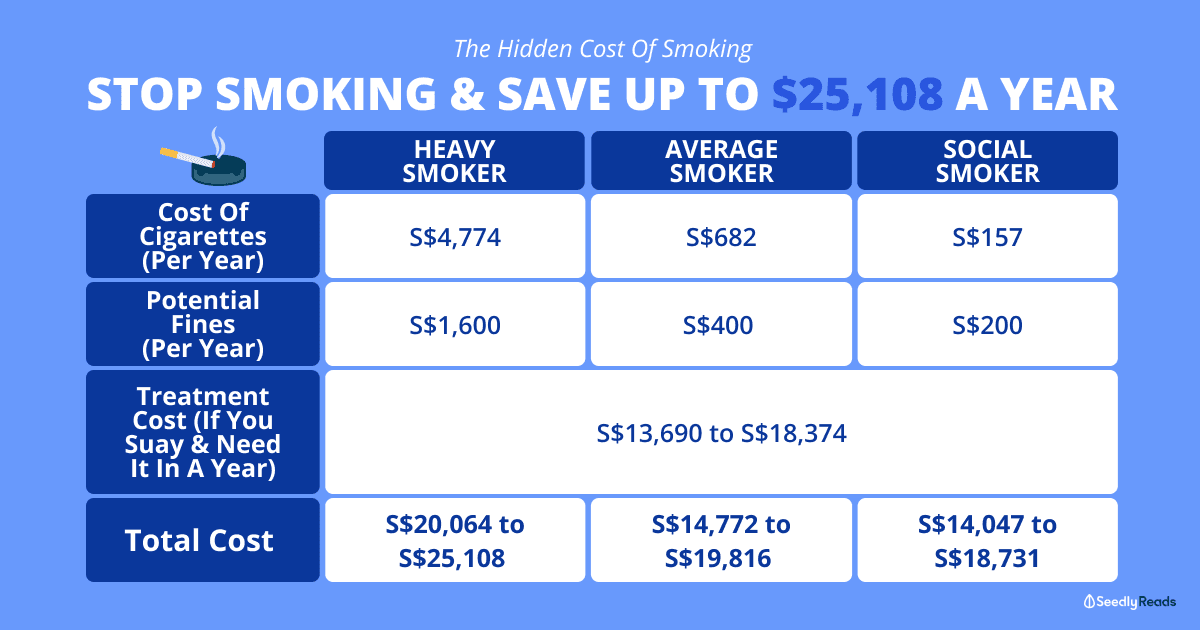 The Hidden Cost of Smoking: Stop Smoking and Save up To S$25,108 a Year

Since 2017, the Ministry of Health (MOH) has been progressively raising the minimum legal age for smoking every January.

On 1 January 2020 this year, the Minimum Legal Age for the purchase, use, possession, sale and supply of tobacco products (MLA) was raised from 19 to 20 years old.

I am actually supportive of this move, as I think that you need to be older and more mature to make this kind of life decision for yourself.

After all, it is common knowledge that smoking is harmful to your health and comes at a heavy financial cost.

Here’s how much it costs to smoke in Singapore. 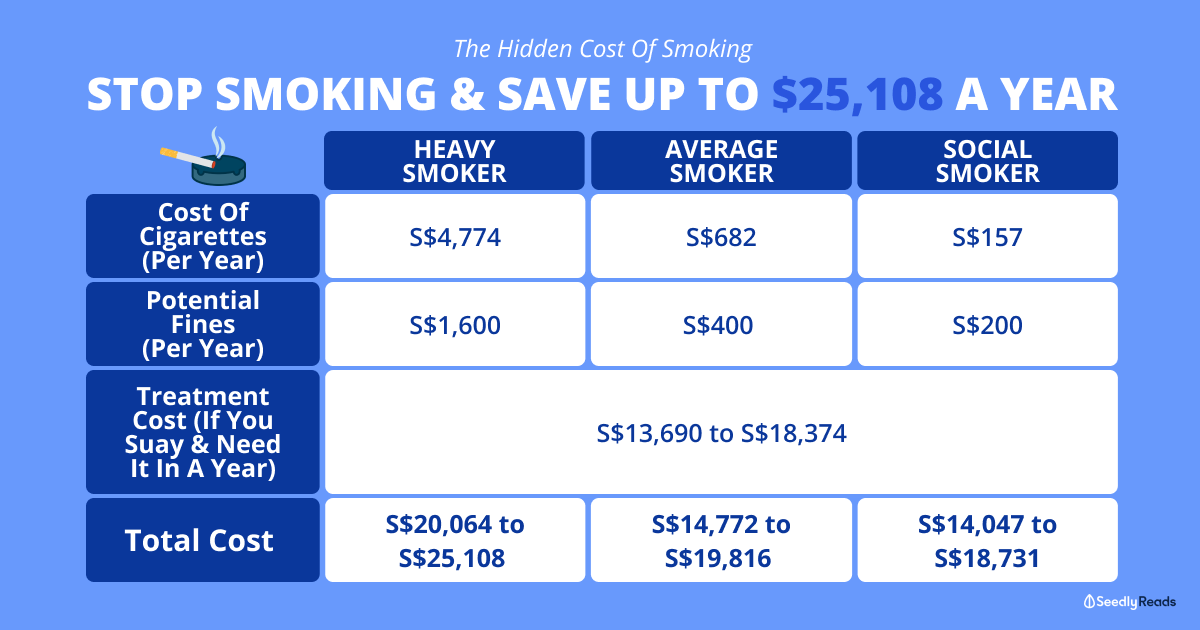 Depending on whether you’re a heavy smoker or a social one, you’ll need to deal with a list of (supposedly) unnecessary costs:

S$4,774 a year quickly adds up over the years, as this could be money that could be key to your early retirement.

How Much Will I Spend On Cigarettes In A Year in Sinagpore?

To provide an estimate we have come up with some standard scenarios.

Here is our methodology and assumptions.

According to German market and consumer data firm Statista, the average 20-stick pack of cigarettes in Singapore in 2019 costs S$13.08.

On top of that, we have identified three main types of smokers with varying smoking habits:

Here’s how much they’d spend on cigarettes in a year:

*rounded up to the nearest dollar.

Even if you were a light smoker, you’d still spend ~S$157 a year on cigarettes.

How Much Is Tobacco Tax In Singapore?

If you’re wondering why cigarettes cost so much here in Singapore, it’s because of the 10 per cent hike in excise duty on tobacco products that was imposed from February 2018.

Before the hike, the retail price for a pack of Marlboro Golds was only S$13.

Besides being prohibitively expensive.

So if you suay suay kena caught, you are looking at a fine of S$200.

Where Is Smoking Prohibited?

If you’re in a building or public service vehicle, smoking is out of the question except at designated indoor smoking rooms and uncovered areas on the rooftops of multi-storey carparks.

Even if you’re outside a building or a public service vehicle, smoking is prohibited at:

Smoking is also prohibited in any area within five metres of ventilation intakes, external windows, openings, entrances, and exits to buildings.

As well as, some parks, gardens and nature reserves managed by the National Parks Board.

Note: this list is not exhaustive so it’s best to check with NEA if you’re unsure.

Looking at the above list, it’s clear that a higher frequency of smoking means that there’s a higher chance of you getting caught.

Especially if you, unfortunately, find yourself in a prohibited area and badly need a nicotine fix.

Unless you can do this:

But all the time?

Plus, it’ll definitely get a little irritating if you need to check against NEA’s list of prohibited areas every time before lighting up…

Assuming a pack of cigarettes has 20 sticks, and you have maybe… a 1 in 1,000 stick probability of getting fined – especially with the islandwide implementation of thermal cameras.

Here’s what your odds look like and how much in fines you’d expect to pay in a year (if you only smoke in areas where smoking is allowed then touchwood lah…):

Note: I rounded the odds up to the closest whole number because as long as there’s a slight chance of getting caught, anything that can go wrong will confirm go wrong…

If you’re a heavy smoker, you’re looking at potentially forking out $1,600 a year (especially if you’re damn suay).

And I’m not even counting on the fact that you might have to pay $1,000 if convicted in court…

What Are The Potential Health Issues And Costs Due To Smoking?

If you choose to smoke or be around second-hand smoke, you’re exposing yourself to potential health risks and problems.

In fact, about 6 Singaporeans die prematurely from smoking-related diseases every day.

And that’s because smoking raises your risk of coronary heart disease; stroke and lung cancer by:

So… What Is The Cost Of Smoking-Related Diseases?

Besides the cost of the cigarettes and the possibility of paying for fines, you’ll also have to consider the cost of seeking treatment.

Here’s a look at the cost some of the common procedures for smoking-related diseases:

Source: MOH | Figures shown on this table include GST and are based on the median of actual transacted fees across the medical institutions for each bill component, from 1 Jul 2018 to 30 Jun 2019. They, therefore, provide an estimate of fees but do not necessarily sum up to the total bill amount.

If you, unfortunately, need all four procedures and opt to have them done in a public hospital (with subsidies)…