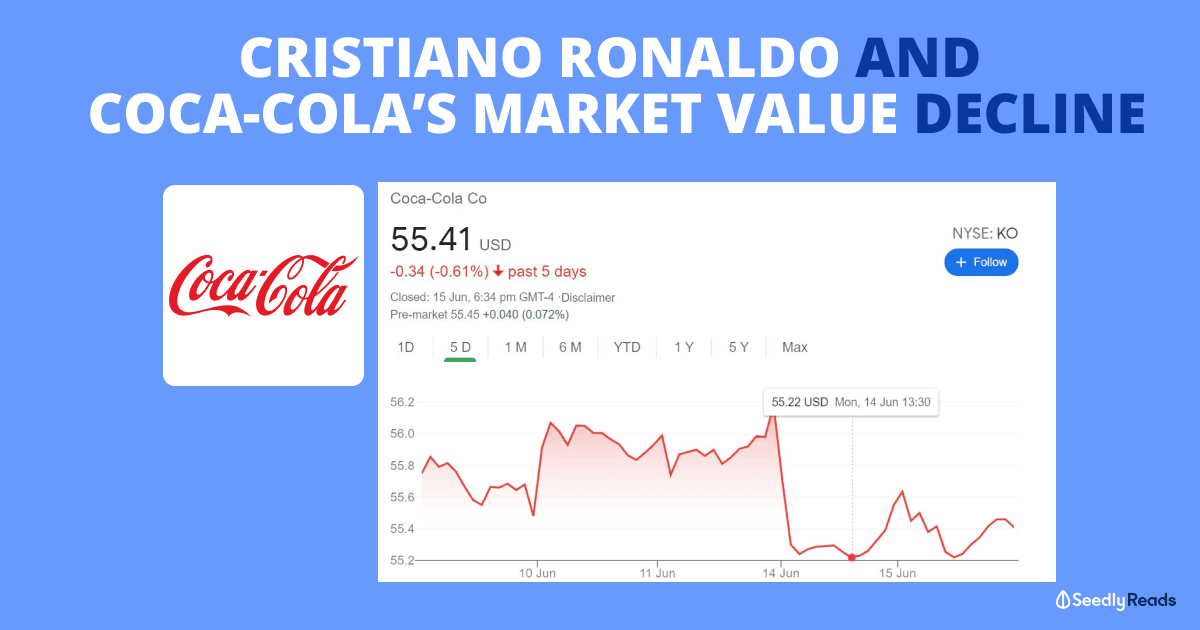 The Portuguese became the all-time top scorer at the European Championships after netting two goals in the dying minutes of the Group F opener.

Ronaldo has now scored 11 goals, ahead of France’s Michel Platini on nine.

Other than the record-breaking feat, what Ronaldo did a few days prior captured media attention too.

The Stunt on Coca-Cola

On Monday, Ronaldo was speaking at a press conference ahead of his country’s game against Hungary.

Placed in front of him were two innocent-looking Coca-Cola bottles.

Little did the Coca-Cola bottles know that Ronaldo was already eyeing them as he took his seat.

…Ronaldo went on to pick up the two bottles, removed them from sight, held up his water bottle, and said in Portuguese, “agua”, appearing to encourage people to drink water instead.

Market capitalisation refers to a company’s share price multiplied by its total number of outstanding shares.

But of course, we won’t know for sure if Ronaldo was indeed the one who caused the fall in Coca-Cola share price, even if the media has cited the correlation.

You see, stocks bob up and down on a daily basis for a variety of reasons, some that can be totally unrelated to the company.

Also, a decline in Coca-Cola’s market value due to Ronaldo’s snub doesn’t mean that its future net profit will be affected, as that’s a function of Coca-Cola’s product sales (or revenue), operating expenses and so on.

Ronaldo is an influential figure, but he’s unlikely to have that much influence over Coca-Cola’s business in the long run.

Therefore, if you are an investor of Coca-Cola, you shouldn’t worry about this incident.

As Coca-Cola, one of the official sponsors of the tournament replied on Tuesday with a statement saying, “everyone is entitled to their drink preferences” with different “tastes and needs”.

Want to Discuss About Personal Finance and Investing?

Liking what you see? Check out our recent works on:

You can participate in the lively discussion regarding stocks and many more here at the Seedly community!

Disclaimer: The information provided by Seedly serves as an educational piece and is not intended to be personalised investment advice. ​Readers should always do their own due diligence and consider their financial goals before investing in any stock. The writer may have a vested interest in the companies mentioned. Artwork image credit: Google Finance