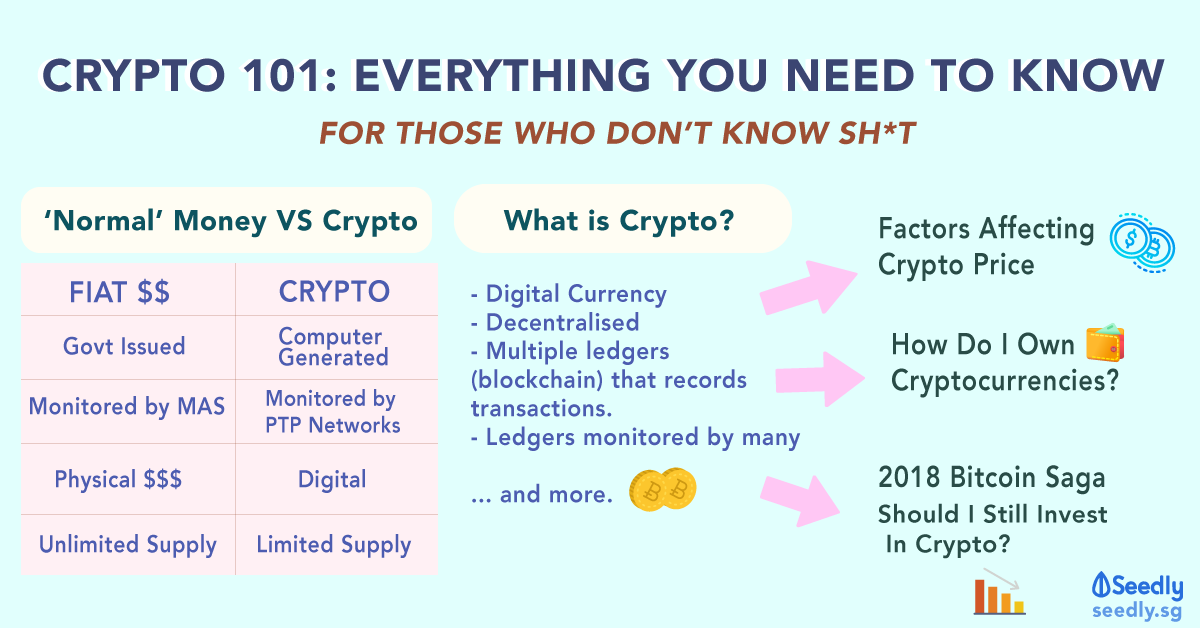 It’s 10am and I’m sitting in the ShopBack office with a blank page in front of me.

After attending a TenX talk about the basics of cryptocurrency yesterday, I was tasked to write a ‘cryptocurrency for beginners’ article.

To be honest, for someone who only reads about cryptocurrency in the news, I was slightly lost.

I’ve attended in total, two talks on cryptocurrency: First with a guest speaker in a Financial Journalism module in school, and the other being the TenX talk.

Without proper context, both talks confound me, and cryptocurrency — being as complicated as it already is — isn’t something that can be fully explained in a one hour talk.

So… I decided to write this article for those who are interested but don’t know shi*t about cryptocurrency.

Here’s a quick overview of the basics you need to know about cryptocurrency.

Fiat money is the money issued by the central government. It is ‘legal tender’ and is traded based on trust in the government. Fiat currencies have the following characteristics:

*Do note that these are the theoretical characteristics of Fiat Money. In the Singapore economy, money supply is controlled by the MAS, and there is a limit to it. However, theoretically, it is possible to have an ‘unlimited’ supply for fiat money, especially in corrupt governments that print an excess amount of money.

There are disadvantages of using Fiat money:

With the advent of online banking, money today is digital, and this gives rise to problems such as ‘double spending‘, where there is a risk that a digital ‘dollar’ is being replicated to make more money.

The solutions banks use today are a ‘centralised’ solution involving a ledger in a computer that keeps track of all transactions.

However, this means that there is a HUGE reliance on the central bank in being accountable for your money.

This may give rise to issues such as corruption, mismanagement of funds, and giving away the control of your money to a government or bank.

For countries without a strong central authority, this poses a huge problem.

Cryptocurrency is a type of digital asset that functions as a currency.

At the risk of oversimplifying it, cryptocurrency is a little bit like online banking, but without a central bank. It is software-based- a little like our online banking platforms from POSB, DBS, OCBC etc.

There is a ledger (called a blockchain), where records of economic transactions are being kept, as well as balances and account numbers, where you can access your balances using a password and make transactions.

Essentially, cryptocurrency is a transparent ledger without a central authority.

This means that multiple people are holding copies of the ledger to keep track of ongoing transactions. With many people keeping track of the same thing, this helps to ensure the accuracy of the blockchain.

Cryptocurrencies are also pseudo-anonymous: This means that everything is open, transparent, and trackable, but you won’t be able to tell who is sending what to whom.

Some quick facts about cryptocurrency:

Just like money, cryptocurrency function as a means of exchange, or as a store of value.

It can be used to purchase goods and services, or it can be accumulated and stashed away in a virtual wallet.

What Does It Mean To Be Decentralised?

To oversimplify what it is, cryptocurrencies are basically currencies that have no single authority that determines its value.

Here is a quick comparison between Fiat Money and Cryptocurrencies:

How Is The Value Of Cryptocurrency Determined?

Put simply, cryptocurrency’s value hinges on economics: there has to be limited supply (scarcity), utility (usefulness of product), and demand. With market forces, price is determined based on the market’s supply and demand. For example, if more people were to buy Bitcoin, the value rises. If fewer people want to buy Bitcoin, they won’t be willing to pay as much. This results in a fall in the bitcoin value.

7 Factors Affecting The Price Of Cryptocurrencies

Types Of Different Cryptocurrencies In The World

Cryptocurrency is a little like ‘gold in digital form’. This means that just like gold, they are limited in quantity.

Over time, when more and more gold is mined, the difficulty in locating and mining gold increases as miners are left with lesser gold buried deeper underground.

Miners of cryptocurrencies, unlike gold miners, do not go around the world with a shovel to mine gold. Instead, they use a mining software to solve cryptocurrencies algorithm to obtain a certain number of coins.

If you want to get cryptocurrency you can mine it or trade goods and services for it.

How To Own Bitcoins?

Anyone is able to own bitcoins. There are two ways in which you can accumulate bitcoins:

There are 3 ways you can buy bitcoins in Singapore:

To learn more about this, you can refer to this guide created by Dr Wealth.

After an unprecedented boom in 2017, the price of bitcoin fell by about 65 percent between January and February.

Subsequently, nearly all other cryptocurrencies also peaked from December 2017 through January 2018, and then followed bitcoin.

Rapidly increasing the price of bitcoin may cause a bubble, which is extremely risky.

By September 2018, cryptocurrencies collapsed 80% from their peak in January 2018.

There were many investors who lost huge amounts of money, from the investment of bitcoin. There are also those who exited and earned, before the collapse of cryptocurrencies.

Should I Still Invest In Cryptocurrencies Now That The Bitcoin Bubble Has Popped?

It is not advisable to invest in something that you’re not familiar with, so I would encourage you to read beyond this article if you are interested in investing in cryptocurrencies.

Cryptocurrencies are considered high-risk investments, due to its speculative and volatile nature.

Here are some risks you should consider before investing:

Cryptocurrency is an area of investment that is massive and complex.

This guide serves as an introduction for those who are interested, but it barely scratches the surface for such a complex topic.

Before deciding to invest in it, do read up extensively and understand the product that you will like to invest in.

Should you have any questions, don’t hesitate to ask our SeedlyCommunity.

QnA: Is It Still Worth Investing In Cryptocurrency?