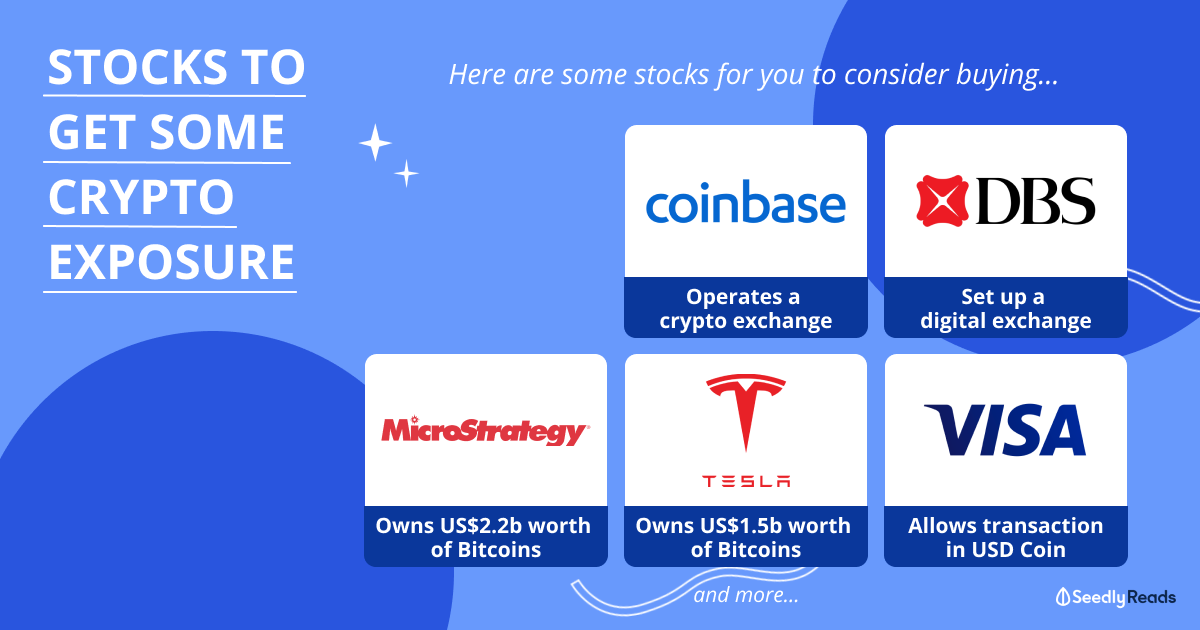 Bitcoin’s price is on a tear….

Every other day, it seems to be hitting new highs.

For the uninitiated, Bitcoin is the first decentralised digital money system that was introduced by Satoshi Nakamoto in a white paper titled, “Bitcoin: A Peer-to-Peer Electronic Cash System”.

With the success of Bitcoin, many other alternative coins, or “altcoins”, were launched.

If you are looking to get a piece of Bitcoin or any other cryptocurrency and don’t want to invest anything just yet.

We are incredibly excited to be launching a campaign to help more people living in Singapore own a piece of the future with cryptocurrencies! #OwnTheFuture.

You won’t want to miss out on what we have in store: 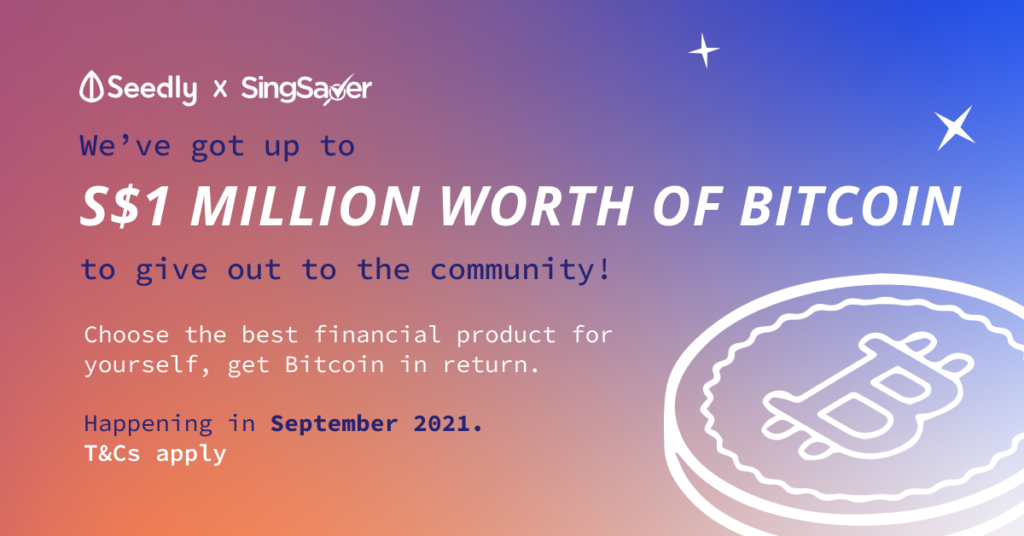 To be eligible for this cryptocurrency campaign, you will have to simply join the waitlist from now till Tuesday (31 August 2021), 11.59pm.

What are you waiting for?

However, if you are looking to get in on the action but don’t want to own any cryptocurrency outright, here are some stocks you can consider researching further into and buying.

It began trading on Wednesday at US$381 a share, increasing 52% from the US$250 reference price set by Nasdaq.

Coinbase went public through a direct listing, where no new shares are issued or sold. They simply start trading. This is unlike the more common initial public offering (IPO) route.

Coinbase shares ended their debut day at US$328.28 apiece, valuing the company at US$85.7 billion, over 10 times its last valuation as a private company.

Founded in San Francisco in 2012, Coinbase allows people and companies to buy and sell various digital currencies, including Bitcoin and Ether.

Coinbase now supports over 90 crypto assets for trading or custody and the total value of the assets represent around 11% of crypto assets’ total market capitalisation.

For the year ended 31 December 2020, Coinbase’s total revenue surged 139% year-on-year to US$1.3 billion while net profit came in at US$322 million, compared to a net loss of US$30 million in the previous year.

The majority of Coinbase’s revenue comes from Bitcoin and Ethereum transactions. While this is great due to the demand for such assets currently, no one knows for sure if the demand will slow down. If it does, Coinbase’s business could be affected badly.

And due to the volatile nature of crypto asset prices and trading activity, Coinbase’s operating results can fluctuate significantly between periods as well. This is something investors should take note of.

Check out our in-depth analysis of Coinbase here: 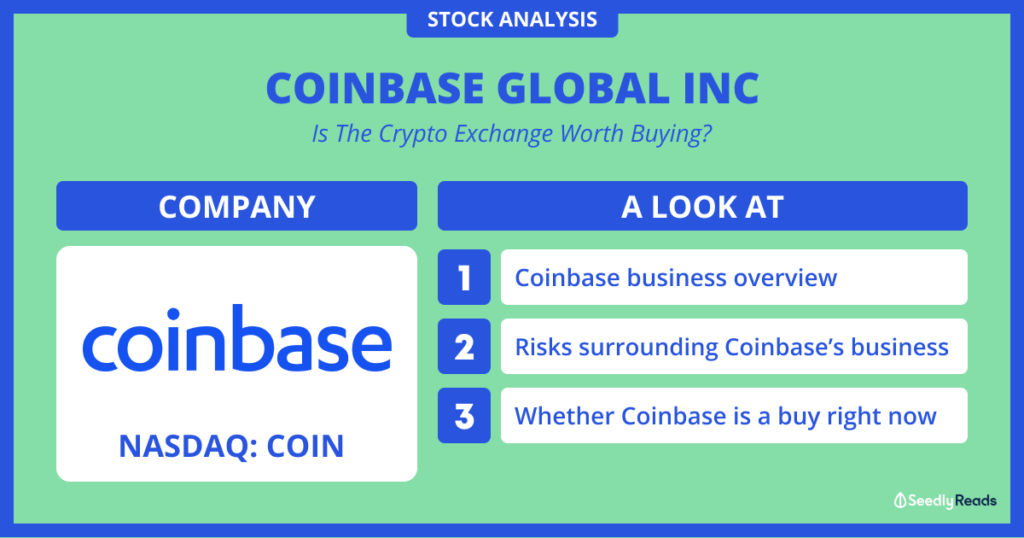 At the end of last year, it launched DBS Digital Exchange, the world’s first cryptocurrency exchange backed by a bank.

In its 2020 annual report, DBS said that it had “been studying and experimenting with emerging technologies over the years” and that it believes “some of these have reached a tipping point, presenting new opportunities for growth”.

“One area is asset digitalisation, which has seen burgeoning growth, and has the potential to reshape capital markets. To ensure that DBS is ahead of the curve in welcoming the mainstream adoption of digital assets and currency trading, we commenced operations of a digital exchange in December. The DBS Digital Exchange offers tokenisation, trading and custody services of digital assets to institutional and accredited investors.”

Business intelligence company, MicroStrategy (NASDAQ: MSTR), believes that that Bitcoin, as the world’s most widely adopted cryptocurrency, can serve as a dependable store of value.

At the end of February, it purchased around 19,452 Bitcoins for some US$1.03 billion in cash at an average price of US$52,765 per bitcoin, inclusive of fees and expenses.

With that, it holds a total of 90,531 Bitcoins, which were purchased at around US$2.17 billion and an average purchase price of US$23,985 per bitcoin, including fees and expenses.

MicroStrategy’s chief executive, Michael J. Saylor made clear in a press release that his company remains “focused on our two corporate strategies of growing our enterprise analytics software business and acquiring and holding bitcoin,”

“We will continue to pursue our strategy of acquiring bitcoin with excess cash and we may from time to time, subject to market conditions, issue debt or equity securities in capital raising transactions with the objective of using the proceeds to purchase additional bitcoin.”

Talk about having conviction in Bitcoin!

(For those who wish to learn more about Bitcoin, MicroStrategy’s website has some great resources such as video interviews, podcasts, and reports.)

PayPal (NASDAQ: PYPL) offers many products to allow consumers and merchants to seamlessly transact in both the offline and online world.

One way PayPal does that is by allowing its users to buy, sell and hold select cryptocurrencies directly through PayPal using their Personal or Premier PayPal Cash/plus accounts.

The crypto service will be available in Venmo this year. Venmo is PayPal’s social payments service and it allows users to make and share payments with friends, family, and select approved businesses.

PayPal users can also learn about cryptocurrencies and track crypto prices through its app.

There are currently four different cryptocurrencies supported on PayPal, and they are Bitcoin, Ethereum, Litecoin, and Bitcoin Cash.

Unfortunately, the crypto service is only available in the US currently. But PayPal plans to expand this service to select global markets in the first half of 2021 and hopefully, Singapore is part of this select group.

But it has since grown to provide over 30 products and services to sellers that help them manage and grow their businesses.

It also has a consumer-facing arm with Cash App, which is an ecosystem of financial services to help individuals manage their money.

Square’s Cash App, which rivals PayPal’s Venmo, allows users to buy, hold and sell Bitcoin, and transfer Bitcoin to and from Cash App.

On top of supporting Bitcoin transactions on its platform, Square also used cash to buy Bitcoin for itself.

Combined, Square’s Bitcoin holding is around 5% of its total cash, cash equivalents and marketable securities (as of 31 December 2020). The company expects to hold its Bitcoin investments for the long term.

The intention for the purchase is that Square believes the Internet needs a native currency and that it’s going to be Bitcoin.

“The Internet has broken through so many barriers all around the world for every industry, and we do think money and currency are a big part of that future. And it doesn’t take a lot to imagine, that certainly that will exist and that it will be Bitcoin. And the reason why is it is completely open. It is driven by consensus. It is something that anyone can see and no particular third-party can actually control. And that really speaks to the principles of the Internet. And as more people participate, not only in investments, but also through products and through development, it gets even more trusted and more solid and more secure and something that more people can utilize. And that’s our goal is to help people understand what their plan is, what it can be used for and make it a whole lot more useful and accessible for anything that they want to do on the Internet.”

Tesla (NASDAQ: TSLA) is a company that doesn’t need any introduction. It’s probably the most highly marketed listed company currently.

Prior to that, in February this year, Tesla bought US$1.5 billion worth of Bitcoins for “more flexibility to further diversify and maximize returns on our cash that is not required to maintain adequate operating liquidity”, as mentioned in its 2020 annual report.

The US$1.5 billion worth of Bitcoin could help provide Tesla with liquidity in the cryptocurrency when customers pay for Tesla cars using Bitcoin.

Visa (NYSE: V), a company featured in our special Stocks 2021 report, announced in late March that it is allowing the use of USD Coin, a stable coin backed by the US dollar, to settle transactions with Visa over the Ethereum network.

In a major industry first, Visa is piloting the capability with Crypto.com, a Visa partner and one of the world’s largest crypto platforms.

Visa added that it has plans to offer the USDC settlement capability to additional partners later this year.

In its 2021 first-quarter earnings call, Visa explained how it views some of these digital currencies:

“Stable coins and central bank digital currencies are an emerging payments innovation that could have the potential to be used for global commerce, much like any other fiat currency. We think of digital currencies running on public blockchains as additional networks just like RTP or ACH networks, so we see them as part of our network of networks strategy. Across both of these segments, we are the clear leader in this space.”

Meanwhile, Visa’s rival, Mastercard (NYSE: MA) said in February that it is bringing crypto onto its network as it sees people using its cards to buy crypto assets, especially during Bitcoin’s surge in value.

It didn’t specify which cryptocurrencies it will work with, only mentioning that it will “start supporting select cryptocurrencies directly on our network” and it will be “very thoughtful about which assets we support based on our principles for digital currencies”.

Disclaimer: The information provided by Seedly serves as an educational piece and is not intended to be personalised investment advice. ​Readers should always do their own due diligence and consider their financial goals before investing in any stock. The writer owns shares in Singapore Exchange and Visa.