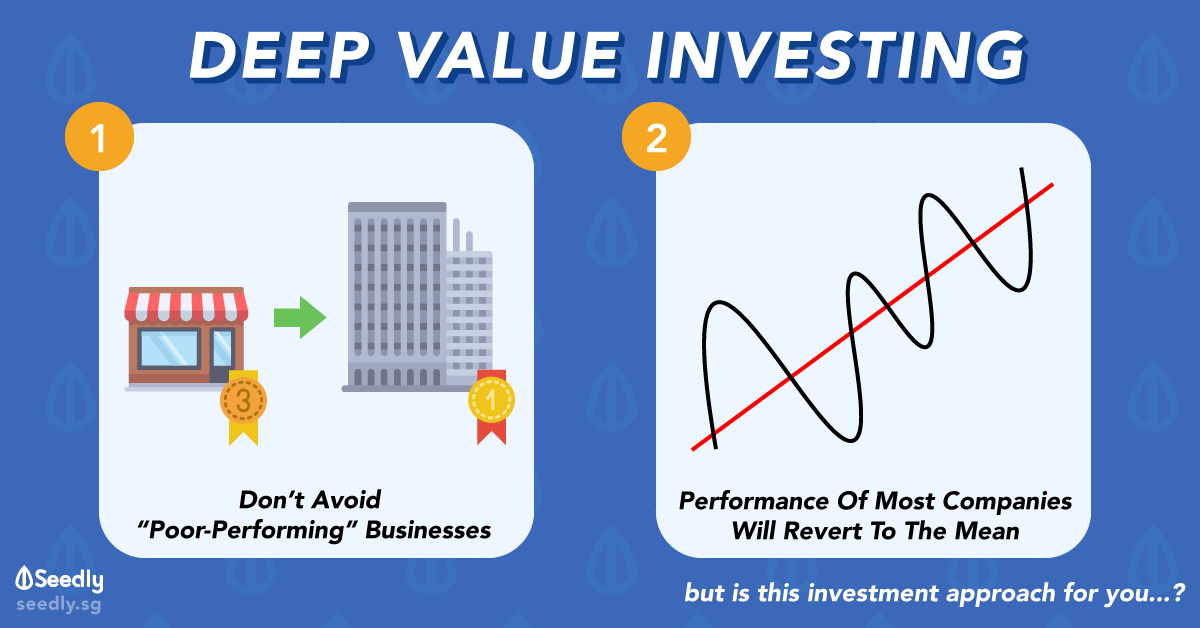 I don’t know about you, but I’d go for that plate of chicken rice any day.

I mean, where else can you find such good value for money?

This principle of buying quality food at really cheap prices can be applied to investing too.

In fact, such a strategy is arguably more suitable for retail investors like us and that it has generated great results.

TL;DR: What Is Deep Value Investing?

In an earlier article, I talked about Benjamin Graham’s Net Current Asset Value Strategy, which is a strategy that is focused on buying a company’s shares at a price lower than the estimated liquidation value. This is also a form of Deep Value Investing.

If you ask me, “What is Deep Value Investing?” I would broadly describe it as buying shares at a very cheap valuation.

This basically means focusing on shares that are trading at very low valuation multiples, such as low P/E (Price/Earnings), P/B (Price/Book) valuations and etc.

So why focus on shares that are trading at such cheap valuations?

Looking at shares that trade at cheap valuations means that they have the potential to perform much better and are less volatile than more “expensive” shares.

The best investments would be those that are exceptions to this rule, but those companies are difficult to identify.

This is probably the first time a technical chart like this has ever appeared on Seedly.

But please, don’t be daunted.

There are two categories of stocks in the chart above.

Both are considered cheap for chicken rice (or stocks), but obviously, one is cheaper than the other.

Let’s look at the chart again.

The chart is essentially a study of the returns from the two classes of stocks from 1951 to 2013.

This conclusion was also corroborated by other studies which all seem to suggest the same thing: the cheaper your stock, the more likely your stock will perform better in the future.

However, some of you might argue that stocks which are cheap, deserve to be cheap.

For example, the business fundamentals could be weak and that is why a certain company’s stock is priced so cheaply.

He observed that there was a Reversion To The Mean, or that over time, people’s heights tended to converge upon an average.

While giving a talk in Israel, the commanders of the Israeli Air Force mentioned that they preferred scolding pilots to praising them. They said that pilots performed better after you scolded them and performed worse after you praised them.

Kahneman, however, disagreed with the commanders’ conclusions.

He argued that it wasn’t so much that the scolding or praising of the pilots had any effect, but rather that the pilots’ performance regressed towards the mean.

Simply put, it all averages out.

In the world of business, this trend occurs too, where good businesses might perform less well over time, and poor businesses tend to improve.

Similar conclusions have been found in other studies, which found stocks from companies that are less profitable tend to outperform stocks from more profitable companies

This seems counter-intuitive to our human experience, but let me share with a few reasons why this trend might occur in business.

So Why Does Mean Reversion Occur?

As any student of economics would know, highly profitable industries tend to attract competition.

When there are more competitors in the same industry, the profitability of the different businesses tends to weaken as each business makes less money than before.

This could explain why certain restaurant businesses do very well at the beginning but perform poorly at the end.

While researching and writing about stocks from the F&B industry, I noticed that many of these companies did well in the past but performed poorly in recent years.

P.S. Not talking about Liao Fan Hawker Chan by the way.

This could be due to the entrance of new competitors since starting and competing in the F&B scene is relatively easy.

On the other hand, in more unprofitable industries, some businesses may exit, which allows the remaining businesses to perform better over time as competition lessens.

Business environments change over time, and so should the businesses which operate in them.

When companies can’t adapt to them, the business suffers.

Likewise for Hyflux, their business could not adapt in time once the open electricity market was made available to the public.

As business environments change, only strong businesses which can adapt or foresee changes can grow and survive.

On the other hand, some businesses may also benefit from a changing environment.

There could also be instances when some businesses perform very well or poorly due to mere “luck”.

Business conditions could be extremely favourable or unfavourable in certain years. Over time, the role of “luck” would diminish. In other words, the performance of different industries might tend towards a mean.

Outliers To This Phenomenon

You might point towards a well-known company like Apple or Microsoft and argue that these companies have achieved sustainable profits over many years.

But as Aswath Damodaran, Wall Street’s Dean of Valuation had pointed out, the fact that we can remember such distinct names proves that these companies are the exceptions to mean reversion.

It goes without saying that some great businesses can constantly stay ahead of their peers. Warren Buffett himself advised us to invest in such businesses, as he had done.

However, as Mauboussin pointed out in his study: identifying such businesses is hard.

What Does This Mean For Deep Value Investing?

I think investors can pick up two points from mean reversion that can be applied to Deep Value investing.

The Performance Of Most Businesses Will Revert To The Mean

Don’t assume that just because a business has been performing well, means that such performance will continue in the future.

As Damodaran had pointed out: in the long run, most businesses’ performance will revert to the mean.

These businesses or industries could become more profitable over time.

Due to negative news or performance, investors may avoid industries or certain companies completely, and over-emphasise the negative aspects of a firm.

This can lead shares to become undervalued, even if the underlying business fundamentals are WEAK.

Naturally, this provides investment opportunities for us to exploit.

Of course, you need to do your due diligence and be very careful.

As a generalisation, Deep Value Investing focuses on looking at companies with very cheap valuations.

The reason why these companies go unnoticed is that they might not have had strong business fundamentals in the past, but have improved over the years if you factor in Mean Reversion.