The Truth About Why Diamonds Are So Expensive The Truth About Why Diamonds Are So Expensive

Nowadays, no union of hearts is complete without the shiny diamond ring.

Even if the proposal is on a motorbike (hats off to Hasan Sanny!).

But what made diamonds a symbol of romance in the first place?

The Most Successful Marketing Campaign Ever

Some of us are willing to splurge thousands of dollars on diamonds, depending on the four C’s (carat weight, cut, colour, and clarity) of the gemstone.

Are they really worth the money, though?

To understand about diamond the way we know it now, let’s take do a time travel back to the 1930s…

In the 1930s, diamond sales in the US were at historical lows, no thanks to the Great Depression.

Due to that, De Beers, a diamond cartel that was established in 1888 in South Africa, was facing problems selling diamonds.

It needed a strategy to spur demand for the stone.

So, in 1938, De Beers hired a leading advertising agency in the United States, N.W. Ayer, to come up with a marketing campaign.

To get people to buy diamonds in a bad economy, the company needed to find a way to link diamonds with something that tugs at one’s heartstrings.

An idea was then born: to create an emotional link between diamonds and their eternity, just like love.

According to the New York Times, N.W. Ayer’s ultimate aim was to “create a situation where almost every person pledging marriage feels compelled to acquire a diamond engagement ring.”

One of Ayer’s copywriter Frances Gerety married the concept of eternal love and diamonds by suggesting the slogan, “A Diamond Is Forever”.

Since 1948, those four famous words have appeared in every single advertisement for De Beers, making it one of the longest-running and successful campaigns in the history of mankind.

Ever since then, a tradition has been established — you give a diamond ring to be engaged.

The campaign was so successful that by the end of the 20th century, 80% of engagement rings contained diamonds.

Prior to De Beers’ successful marketing, presenting a woman with a diamond engagement ring wasn’t a widespread occurrence.

De Beers not only convinced the world about the power of diamonds; it’s also a fact that diamonds aren’t actually rare.

Soon after the discovery of large diamond mines in South Africa, the British financiers who had organised the South African mines realised the market would be flooded with diamonds if they didn’t intervene.

Therefore, they created De Beers (that’s how the cartel was born) to take full ownership and control of the world diamond trade.

Back to De Beers’ “A Diamond Is Forever” ad.

The marketing campaign was so successful that in 1999, Advertising Age magazine named De Beers’ famous four words as the slogan of the century (coming in second was Nike’s “Just Do It”).

De Beers just did it!

And convinced all of us that diamonds are worth splurging our money on.

When N.W. Ayer started its campaigns for De Beers in the late 1930s, it suggested spending one month’s salary on an engagement ring.

It worked so well that De Beers randomly decided to increase it to two months’ salary.

In the 1980s, ads pushed people to pour money on rings with phrases like: “2 months’ salary showed the future Mrs Smith what the future would be like.”

The rule has stuck through and De Beers’ “two months’ salary rule” is still widely accepted.

And men are continually being unhealthily judged based on how much they spend on their proposal rings.

Or women for the matter, if they are doing the proposing.

Are Diamonds Really Worth It?

The perplexing thing is that diamonds are not worth that much.

And they are not liquid investments as you can’t resell diamonds easily.

Due to the retail mark-up, which can be 100% to 200%, the resale value of diamonds is almost always below what you usually pay.

Sadly, diamond jewellery typically resells for 25% to 50% of the purchase price.

So it’s a losing “investment” right from the onset.

What Are the Alternatives To Real Diamonds?

Convinced that real diamonds are not worth your money?

But you still want to propose to your other half using diamonds?

Then you can check out diamond stimulants or synthetic (lab) diamonds (if your partner appreciates you saving money, like mine).

Lab diamonds have the same physical, chemical, and optical properties as mined diamonds.

But they are priced way lower. 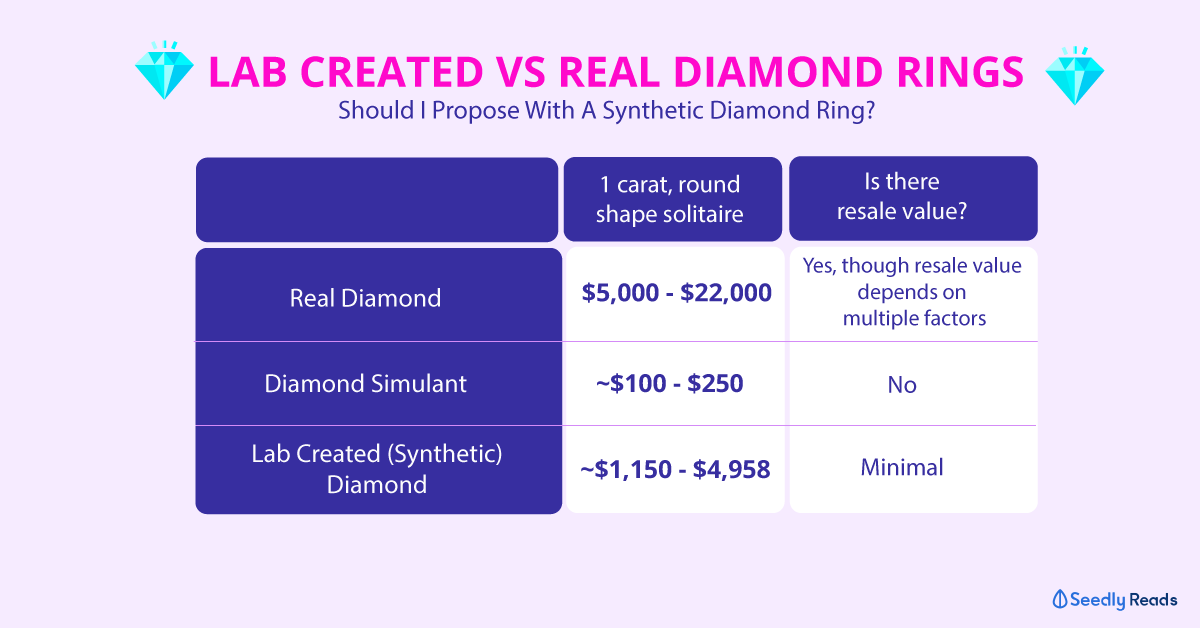 With the money you have not spent…

you can probably put them into investments that actually grow, and let compounding do its magic over the long-term.

Or put it into a savings account for your wedding, HDB BTO flat, or home renovation.

Join our friendly SeedlyCommunity and talk to fellow Singaporeans about diamond rings and your thoughts on it!