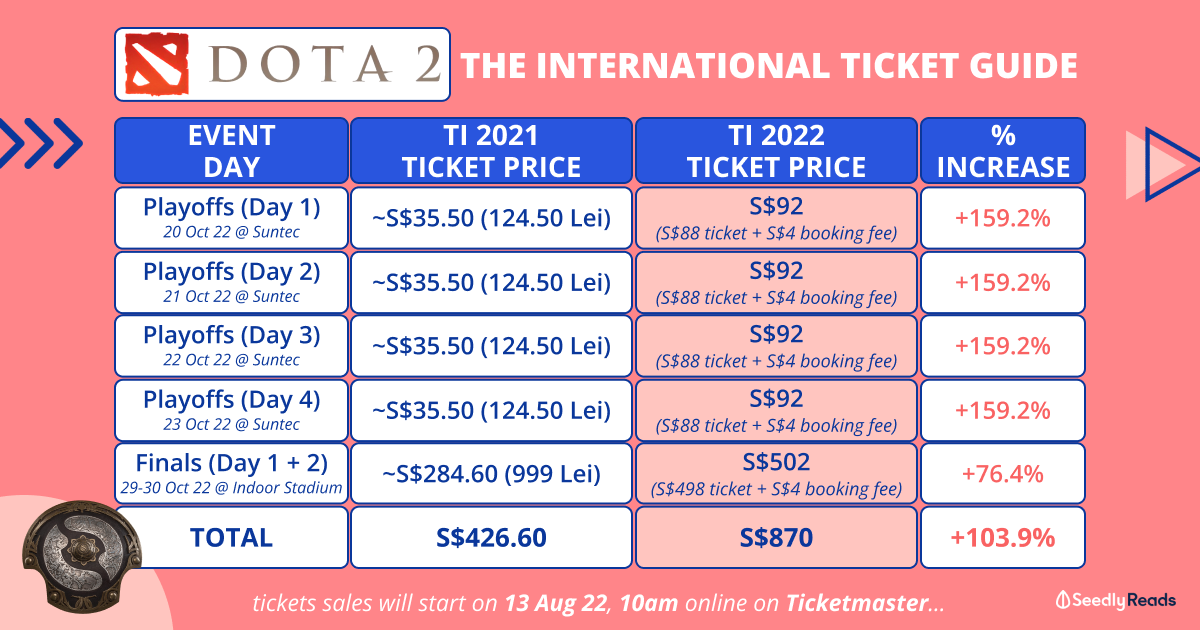 If you are a guy (or gal) who was born in the 90s like me, there’s a good chance you might have played a little fan-made multiplayer online battle arena (MOBA) mod called Defence of the Ancients (DOTA) Allstars.

The mod, which was created back in 2003 for the video game Warcraft III: Reign of Chaos and The Frozen Throne, was created by Kyle “Eulogizing” Sommer and was further developed by Meian, Ragn0r and Steve “Guinsoo” Feak.

In 2005, Feak handed the game’s development to IceFrog, who would then develop its sequel Dota 2 with video game publisher Valve.

Dota 2 became insanely popular when it was released as a Windows-only open beta phase in 2011 and was officially released in July 2013.

A testament to the game’s lasting popularity is that it remains the second most popular game on the video game store and platform Steam:

Its success could be attributed to the game’s annual international tournament Dota 2: The International (TI), which was first held during Gamescom 2011 in Cologne, Germany, by Valve to promote the game.

The tournament has been held every year since save for 2020 due to the COVID-19 pandemic.

Since then, the tournament has been held in Seattle, Washington, Vancouver, Canada, Shanghai, China, and Bucharest, Romania, in 2021.

Save to say this is a special tournament as TI 2021 holds the record for the largest prize pool for any single esports tournament in history.

The International 2022 (TI11) tournament will be held in Singapore this year.

Here’s all you need to know about TI11, including ticket prices, when tickets will be released as well as the location of the event.

Before we begin, here’s a little about the game.

According to the Dota 2 Wiki:

Dota 2 is a Real-Time Strategy (RTS)-styled MOBA-type competitive team game with Role Playing Game elements. Two competing teams (Radiant and Dire) consist of five players each.
The main objective in Dota 2 is to destroy the enemy Ancient inside their stronghold. These strongholds are protected by multiple towers down three lanes. Instead of building armies of units like in classical RTS games, each player controls a single Hero, a strategically-powerful unit with unique abilities and characteristics which can be improved over the course of the game.
Experience is earned when nearby creeps and heroes die, and once collecting enough experience, the hero gains a level, which increases the hero’s stats, and at most levels the hero gains a skill point which can be spent to unlock or upgrade one of the hero’s abilities.
Alongside a hero’s fixed abilities, each hero has sox inventory slots which can be filled with Items which provide various benefits and abilities. To purchase these items, Gold is gained passively over time, by killing creeps, killing enemy heroes and by destroying buildings.
Dota 2 has a heavy emphasis on tactics and team coordination, and a deep amount of strategy focused on building up strength as fast as possible, optimal itemization, and selecting what order to upgrade your hero’s spells.

In other words, the game is not easy to pick up and has quite a bit of depth to it.

What is Dota 2: The International?

As mentioned above, TI is an annual international esports world championship tournament that has been held every year since save for 2020 due to COVID-19.

Since then, the tournament has been held in Seattle, Washington, Vancouver, Canada, Shanghai, China, and Bucharest, Romania, in 2021.

This year’s TI11 will be held in Singapore and will be the eleventh iteration of The International.

In case you were wondering why the prize money was so huge.

According to Liquidpedia, here is the total prize pool for TI since its inception in 2011:

At the Stockholm Major held in October and November last year, Valve announced that The International would be hosted in Singapore, which will be the very first time this international esports tournament would be held in South East Asia.

TI 2022 will be a 23-day-long event with four consecutive weekends of Dota action and 30 teams from all over the world battling it out.

Unlike previous TIs, there is a new Last Chance Qualifier event which is separate from the Regional Qualifiers.

The Last Chance Qualifiers will run from 9-12 October 2022 and feature 12 runner-ups from the Regional Qualifiers battling for two spots in the group stage.

This will be followed by the Group Stage on 15-18 October 2022 — featuring 20 teams battling to make the Main Event.

The qualifying teams will then battle through the Playoffs at Suntec Singapore Convention Centre on 20-23 October 2022, where the competitors will be whittled down even further.

The survivors will advance to the Finals at the Singapore Indoor Stadium on 29-30 October 2022 — where the Aegis of Champions will hang in the balance.

As you might have noticed, TI11 is less than two months away.

Valve recommends that you create a Ticketmaster account before the sale so there will be no delays when you want to buy the tickets.

Do note that each customer will only be limited to purchasing up to five tickets for each tournament day.

Purchasers residing within Singapore can choose courier delivery or will-call pickup. All others must pick up their tickets at will-call only.

The event itself has been split into two separate sections. The Playoffs will run from 20 -23 October 2022 and feature the top 16 teams in Dota 2 as they compete for a spot in the Finals.

The Finals will be the culmination of the event, where the four remaining teams compete to prove themselves worthy of claiming the Aegis of Champions. The Finals will be held on 29 -30 October 2022 at the Singapore Indoor Stadium.

Here are the ticket prices in table form (for context, I added the previously announced The International 2021 ticket prices before the ticket sales were cancelled and refunded due to the rising cases of COVID-19 in Romania at that time):

However, do note that ticket Pricing excludes booking fees charged by Ticketmaster as follows:

As you can see, the prices for tickets have gone up considerably and is a big ask for the event.