Economic Moats Explained: What to Look out for When Investing in Companies
49
shares 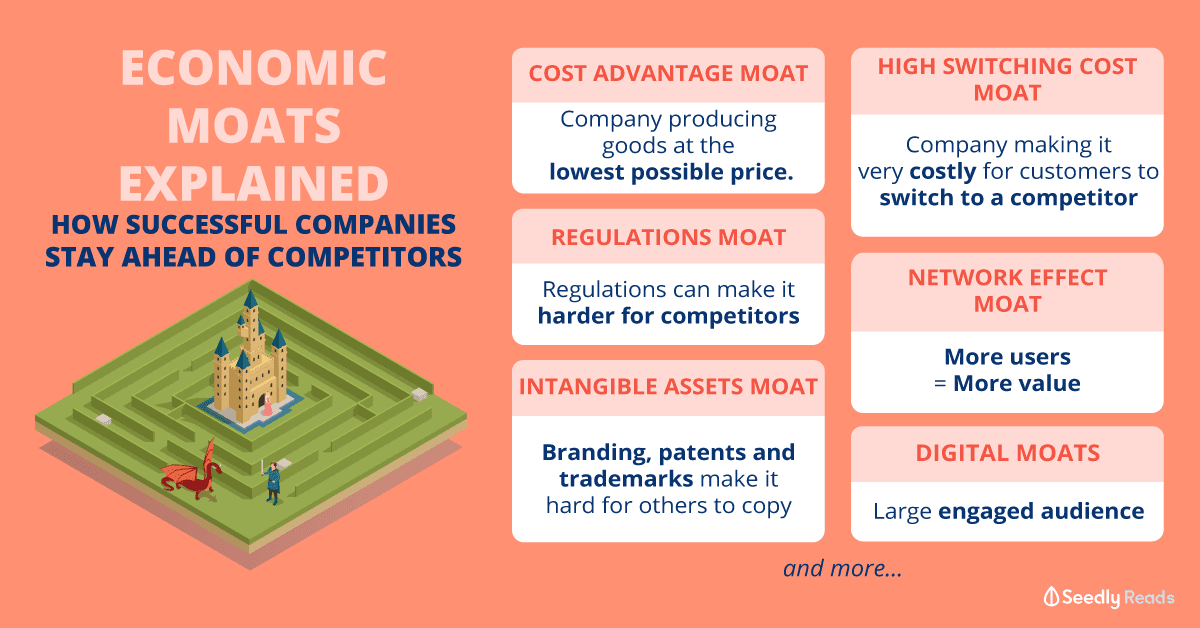 Economic Moats Explained: What to Look out for When Investing in Companies

When I first heard about the term economic moats, my mind wandered off to the Akira Kurosawa movie classic, Seven Samurai.

The movie tells the story of a group of farmers in a village that hire seven rōnin (samurais without masters) to fight off bandits that are trying to steal their precious crops.

In the pivotal battle, the villagers and the rōnin build a moat and wooden fence to defend against the bandits.

What does this have to do with investing? I’m glad you asked.

What is an Economic Moat?

The concept of economic moats came from Warren Buffett, who coined the term in an interview with Fortune magazine in 1999:

“The key to investing is . . . determining the competitive advantage of any given company and, above all, the durability of that advantage. The products or services that have wide, sustainable moats around them are the ones that deliver rewards to investors.”

The term refers to a company ability to preserve the competitive advantage it has over its competitors.

FYI: Competitive advantage is defined as an entity’s ability to produce goods or services that are better or at a cheaper rate than its competitors.

An economic moat insulates a company’s market share and long term profits from competitors making it difficult for them to compete.

Just like the village in Seven Samurai, the moat’s purpose is to help protect the villagers and their riches (precious crops) from the bandits.

Is There a Difference Between “Economic Moat” and a “Competitive Advantage”?

Football provides a good analogy. Buying a player like 35-year-old Cristiano Ronaldo on a one year contract can give a team a short term boost.

However, Ronaldo will leave at the end of the season.

In contrast, a strong scouting system might take longer to bear fruit.

However, it can deliver young hungry talent — players under long term contracts that will improve the team for years.

Getting Ronaldo on a one year contract is a competitive advantage. A scouting system is an economic moat.

Why Are Economic Moats Advantageous?

Companies with strong economic moats are better equipped to withstand their competitors and remain successful.

It is important for companies to build deep and wide economic moats to create a diversified and effective arsenal of competitive advantages so that their competitors cannot keep up.

There are six main types of economic moats.

I will be referring to Pat Dorsey’s (founder of Dorsey Asset Management) work when talking about these types of economic moats.

As you can see, economic moats are a qualitative measure of a company’s ability to stay ahead of its competitors for an extended amount of time.

However, it is difficult to express quantitatively as there is no obvious dollar value.

Despite that, it is still an important qualitative factor to evaluate a company’s future success and whether the company is worth investing in.

The first economic moat that you should be looking out for in a company is the cost advantages it has built up.

Companies that can produce their goods and services at the lowest price possible through factors like economies of scale or improvement in its processes have a major advantage over its competitors.

With these structural cost advantages, companies can either choose to undercut their competitors while earning similar margins or they can earn more profit by charging market-level prices.

For example, we have Telsa which has improved its processes to bring down the cost of making battery packs.

According to Cairn Research Advisors (an Electric Vehicle (EV) battery research firm) which reported that the cost of the battery packs Tesla uses in its electric cars dropped to USD$158.27 per kilowatt-hour in 2019.

For context, their rivals GM and Porsche that produce EV batteries that cost USD$200 per kilowatt-hour.

This long term sustainable cost advantage is part of the reason why the Tesla Model 3 was the best selling electric vehicle in the world in 2019 as it allowed Tesla to price the car at a more competitive price.

The second economic moat you should look out for are the high switching costs that companies create to retain customers.

Switching costs are defined as the cost a customer will incur when switching products or services. A company creates a high switching cost economic moat when the cost of switching to a competitor will outweigh the potential benefits.

This is even if the product of the competitor is far superior.

A good example of this would be Oracle.

Once you have started using their systems for your business, replacing it will be too expensive or next to impossible as changing the Oracle database will cost millions and take up thousands of work hours.

Because Oracle is so integrated with its customer’s business, the can raise prices almost every year and get huge profits on customer renewals.

This discourages customers from switching to other competitors which makes it an effective economic moat for Oracle.

Governmental regulations can make or break a company.

Policies are written by the government to control the barrier to entry in particular industries.

In the Singapore context, Singapore Exchange (SGX) is a great example of this.

SGX is both the regulator and the only stock exchange in Singapore allowed to operate.

New competitors to SGX have not materialised due to the high barriers of entry.

Not only will the competitor have to build up and maintain an expensive stock market engine; it will also have to adhere to SGX regulations as well.

Thus, from this example, you can see how government regulations can act as a wide economic moat for a company like SGX.

Simply put the network effect, is where a service or good will increase in value as the number of users goes up.

When a company is able to successfully monetise its user base, they would have built a network effect economic moat.

Back in 2016, Snapchat was one of Instagram’s biggest competitors. Snapchat’s product was so good that Facebook gave up on creating Instagram clones and more or less copied Snapchat with Instagram stories.

With its huge user base, Snapchat found it so hard to compete with Instagram as people’s friends, colleagues or family were all on Instagram.

Thus you can see that Instagram has a rather tough moat to break up due to its large user base.

Fifth on this list of economic is a company’s intangible assets. This consists of things like patents, trademarks, brand recognition and culture.

Think about it. What is the difference between a pair of sports shoes from Adidas or a more budget brand like Decathalon?

The same product can have roughly the same quality and serve the same purpose but Adidas is more expensive and desired due to brand recognition.

This will drive up profits for the company as its margins will be higher.

A good example will be Adidas which was initially a simple athletic-apparel brand started by two brothers.

It has since evolved to become a significant cultural institution and a tastemaker.

Similarly, labels like Supreme use the hype around the brand to sell clothes for many times what its worth.

In the digital age, inbound marketing and clout is king.

The power to reach out to large audiences and potential customers organically is a significantly wide economic moat.

For the longest time, the fight for your eyeballs on social media has been cutthroat.

It is not easy to build up a significant following of engaged followers on social media. This has widened the moat making it hard for new competitors to enter.

Another way companies can build a digital moat is to build-up customer data.

When a company knows its customer well, it can make smarter recommendations which will make it hard for them to switch over to other brands.

For example, we have Netflix and its machine learning algorithm.

Each time you watch a show on Netflix, it feeds data to the algorithm and refreshes it. The more you watch the more it will give you better personal recommendations.

Your mileage may vary but Netflix’s recommendations are handy now because of the hundreds of hours I spent binge-watching shows.

This makes me reluctant to switch streaming services.

One of the basic building blocks of modern economics is that with the benefit of time, competitors will chip away at the competitive advantages enjoyed by a company.

Our world is ever-changing.

From an investor’s view, it is ideal to invest in companies with a wide variety of durable economic moat that create a sustainable, meaningful competitive advantage.

The companies also need to be innovating and putting consumer interests first, as technology has made moats narrower and shallower.

After all, no amount of economic moats no matter how deep and wide can keep out complacency.