Elon Musk Asks Twitter if He Should Sell 10% Of His Tesla (NASDAQ: TSLA) Shares: What Investors Should Know
89
shares 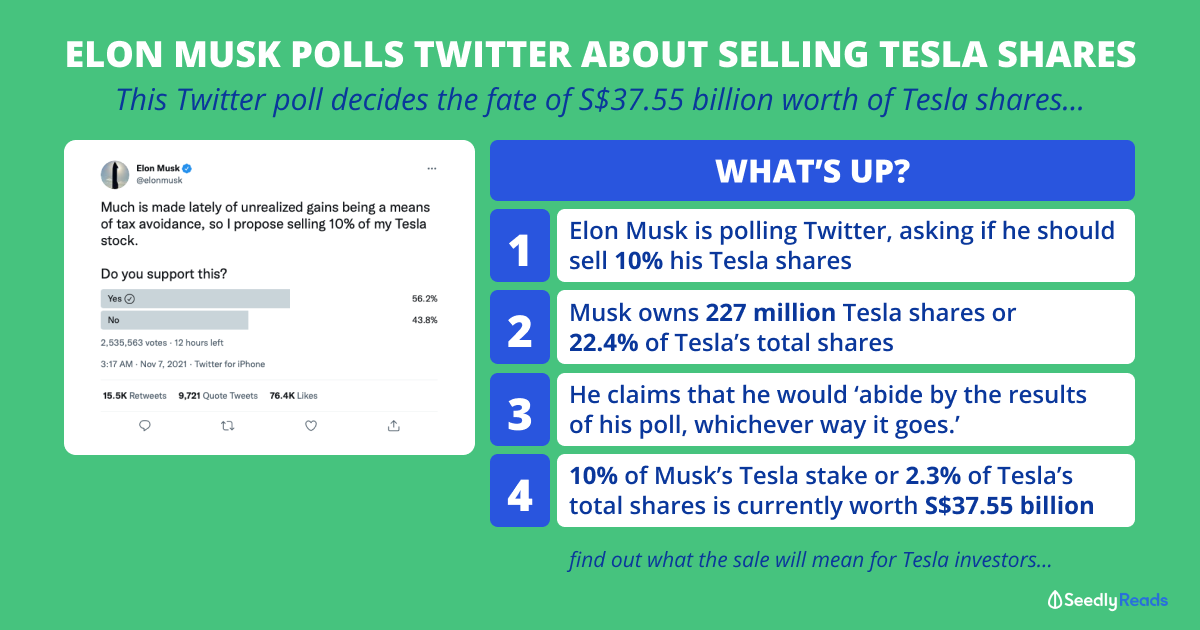 In the latest episode of the Elon Musk show (remember his price moving tweets about Bitcoin in May?), the world’s richest person tweeted this poll to his 62.5 million Twitter followers at about 4am Singapore time today (7 November 2021):

What to make of this madness?

And should investors who hold Tesla shares be worried?

TL;DR: Elon Musk Asks Twitter if He Should Sell 10% Of His Tesla Shares — What Investors Should Know

According to Bloomberg, Elon Musk is currently the world’s richest person with a net worth of US$335.1 billion (S$452.6 billion).

Crazily enough, Musk is worth three times more than super investor Warren Buffet, the chairman of Berkshire Hathaway, who is only worth US$104.1 billion (S$140.6 billion).

For the uninitiated, Musk is a billionaire entrepreneur who co-founded and leads innovative companies like Tesla, The Boring Company, Neuralink and SpaceX.

Thus, the poll was likely posted in response to the so-called ‘Billionaires Tax’ proposed in the U.S. Senate Wednesday (27 October 2021), which Musk publicly opposed on Twitter.

For context, this ‘Billionaires Tax’ would help provide revenue for the proposed US$1.85 trillion (S$1.82 trillion) Build Back Better infrastructure bill aimed at addressing the climate crisis and expanding the U.S.’s social safety net.

According to CBS News, the critical aspect of this ‘Billionaire’s Tax’ is that:

tradable assets, such as stocks, would be valued annually. Billionaires would be taxed on their capital gains — whether they have sold the asset or not.
Under current law, a gain is only taxed if it is “realised” when its owner sells the asset and books the profit. Unrealised capital gains — stocks or other investments that rise in value and that the investor holds onto — aren’t currently taxed.

But, that proposal was shot down and replaced with a tax on millionaires incomes the same day.

At the time of writing, about 2.5 million people have voted, with about 56.2 per cent voting that Musk should sell 10 per cent of his stake in Tesla (NASDAQ: TSLA). The poll is set to close at 4am on Monday, 8 November 2021 Singapore time.

You might be wondering, how much is 10 per cent of Elon Musk’s stake in Tesla?

According to a February 2021 SEC filing, Musk holds about 227 million Tesla shares or about 22.7 per cent of Tesla’s 1,004 million total outstanding shares.

This means that Musk will be selling about 2.3 per cent of Tesla’s shares if the billionaire does indeed sell his 10 per cent stake in Tesla.

But the billionaire will have to pay capital gains taxes if he does sell his Tesla shares.

As he is a resident of the state of Texas, he will only have to pay federal taxes on his capital gains.

According to the U.S. Internal Revenue Service (IRS), Musk will be liable to pay capital gains taxes at these rates:

In addition, Musk claims that he would:

abide by the results of his poll, whichever way it goes.

Why Is Elon Musk Pulling This Stunt?

To understand why Musk is asking his Twitter followers if he should sell 10 per cent of his Tesla shares, you need to know how much tax billionaires in the U.S. pay.

To do that, let’s look at ProPublica’s June 2021 investigative report which uncovers how much tax the 25 wealthiest people in America actually pay.

FYI: Propublica is ‘a nonprofit newsroom based in New York City that aims to produce investigative journalism in the public interest.’

In contrast, the average American household has to pay about 14 per cent in U.S. federal income taxes.

But on balance, the billionaire did have to pay some taxes in 2016 when he exercised US$1 billion in Tesla stock options.

Nevertheless, ProPublica reminded us that Musk’s ‘true tax rate’ from 2014 – 2018 is just a miserly 3.27 per cent — way lower than what the average American household would pay.

You might be wondering, how does Musk pay little to no tax?

Musk can do so as he does not draw a salary from the companies he works for.

Instead, he borrows money from Tesla by exercising his stock options and taking out loans using Tesla’s shares as collateral.

And lucky for Musk, he does not have to pay any federal income taxes on these loans. The billionaire is also able to get some tax deductions on the interest on those loans.

But as ProPublica has pointed out, he needs to pay taxes when he exercises his options.

In response to one of his supporters on Twitter, Musk stated that he only raise funds this way to minaly invest in his other companies.

What Will Happen to Tesla’s Share Price if Elon Musk Sells 10% Of His Tesla Shares?

As mentioned above, Musk’s stake in Tesla amounts to 227 million Tesla shares as of February 2021.

According to Nasdaq, Tesla has 1,004 million total shares outstanding. This means that Musk will be selling about 2.3 per cent of Tesla’s outstanding shares if he does indeed sell his 10 per cent stake in Tesla.

However, this type of selling is generally not ideal for retail investors holding Tesla shares, as Tesla’s share price would crash in the short term when such a substantial number of shares are sold at one time.

And judging from how unpredictable Elon Musk is, he might just go through with this.

Or this could be just a huge publicity stunt to prove a point about how taxing billionaires is unfair.

Looking For Stock Analyses to Position Your Portfolio for 2021 and Beyond?