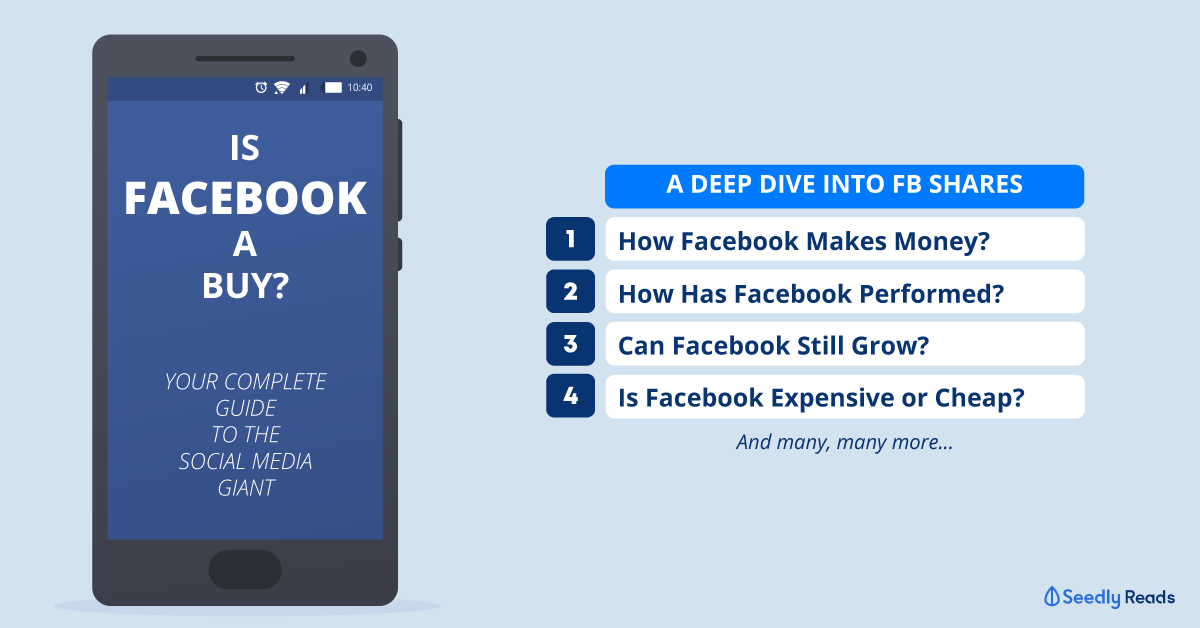 Facebook Inc (NASDAQ: FB) is a company that will be familiar to many.

It’s the world’s largest social network that runs the eponymous Facebook social media platform, along with WhatsApp and Instagram.

With its rising popularity, many potential investors would have this question in mind:

Let’s attempt to answer that question by looking at various aspects of Facebook such as how it makes money, its past financial performance, its future prospects, and its stock valuation.

6. What Are the Important Operational Metrics to Track for Facebook?

9. Who Are Facebook’s Competitors?

Facebook has two classes of shares: Class A and Class B.

Class B stock has ten votes per share while Class A common stock has one vote per share. Retail investors are only allowed to buy the Class A shares.

For those who are unfamiliar, here’s a guide on investing in US shares and the various taxes involved.

Facebook’s mission is to “give people the power to build community and bring the world closer together.”

True to its mission, Facebook has built or acquired many brands along the years, including:

The first four are platforms that allow users to connect, share, discover, and communicate with each other.

The last brand on the list, Oculus, may not be that well-known.

It is a hardware, software, and developer ecosystem that allows people to experience virtual reality together.

However, unlike Facebook’s other large acquisitions, Instagram (US$1 billion in 2012) and WhatsApp (US$19 billion in 2014), Oculus does not seem to be paying off (as yet?).

Facebook generates the bulk of its revenue from selling advertising placements to marketers.

Its ads enable marketers to reach people based on a variety of factors, such as age, gender, location, interests, and behaviours.

The ads can appear in multiple places including on Facebook, Instagram, Messenger, and third-party applications and websites.

“In business, I look for economic castles protected by unbreachable ‘moats.’ ”

An economic moat acts as a powerful deterrent to those considering encroaching the territory of a business.

By investing in companies that keep consumers coming back for more, it ensures even more profits are produced by the firms.

A moat that Facebook has is that of “network effect”.

When a new user joins Facebook’s product, that product becomes slightly more valuable. That, in turn, encourages more users to join, creating a network effect at large. Once this network effect is created, it will be hard for users to leave.

Facebook monetises this user base by selling ads as a form of digital marketing.

Facebook has been successfully making money from selling advertising placements to marketers. This can be seen from the growing revenue base over the last five years:

Even though revenue growth year-on-year has slowed down, it is still at a respectable 27% for 2019 (as seen earlier).

The decline was mainly due to higher data centre and technical infrastructure costs, and a one-off US$5.0 billion Federal Trade Commission (FTC) settlement expense.

For the first quarter of 2020, revenue rose “only” 18% year-on-year to US$17.7 billion as Facebook experienced a significant reduction in the demand for advertising due to the COVID-19 pandemic.

“But the other reflection that I’ve had is that I think if you’re going to have a business, which is primarily advertising, which is our plan for the long term, then I think you have to recognize that advertising is more volatile and sensitive to the macro economy.”

However, Facebook daily active users (DAUs) increased by 11% year-over-year during the quarter.

Over the longer term, as the economy recovers and ad spending picks up, Facebook stands to benefit with the higher number of users.

There are already some signs of improvement in ad revenue.

Facebook said that after an initial steep decline in ad revenue in March, it has seen signs of stability in the first three weeks of April.

What Are the Important Operational Metrics to Track for Facebook?

The key Facebook metrics to track are its DAUs, monthly active users (MAUs), and average revenue per user (ARPU). Note that the metrics do not include users on Instagram, WhatsApp, or other products.

DAU is defined as a registered and logged-in Facebook user who visited Facebook or used the Messenger application on a given day.

DAUs and DAUs as a percentage of MAUs are measures of user engagement on Facebook.

MAU is defined as a registered and logged-in Facebook user who visited Facebook or used the Messenger application in the last 30 days as of the date of measurement.

If Facebook was a country, at 2.6 billion users, it will be almost the size of China and India combined!

From those user base, how much does Facebook make per user? That’s where the ARPU metric comes in.

ARPU is defined as total revenue in a given geography during a given quarter, divided by the average of the number of MAUs in the geography at the beginning and end of the quarter.

For the 2020 first-quarter, Facebook’s worldwide ARPU stood at US$6.95, as seen from the snapshot below: 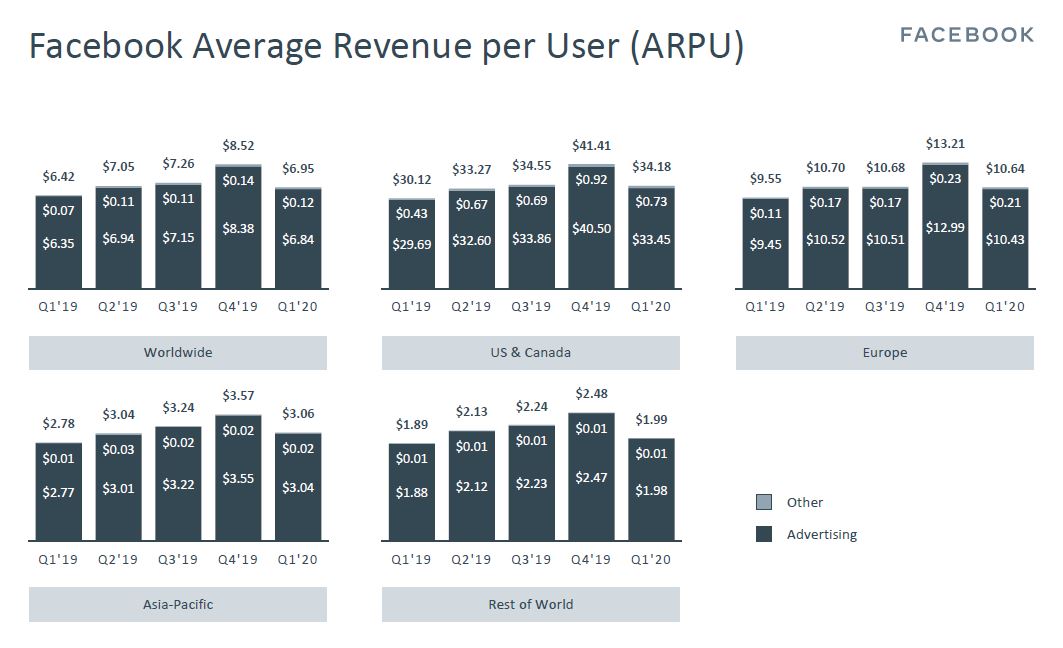 Its ARPU in regions such as the US & Canada are relatively higher mainly due to the size and maturity of those online and mobile advertising markets.

For instance, 2019 ARPU in the US & Canada region was over 11 times higher than in the Asia-Pacific region.

The following is a look at the Family Average Revenue per Person (ARPP).

“Family” refers to Facebook, Instagram, Messenger, and WhatsApp products; ARPP is similar to ARPU, but it’s for the Family of products.

Facebook doesn’t pay a dividend and it doesn’t intend to, as stated in its annual report.

“We have never declared or paid cash dividends on our capital stock. We currently intend to retain any future earnings to finance the operation and expansion of our business and fund our share repurchase program, and we do not expect to declare or pay any cash dividends in the foreseeable future.”

Since Facebook is a growing company, it makes total sense for it to retain cash to plough back into its own business to grow it even further.

The huge ownership stake and a nominal base salary could mean that his interests are closely aligned with those of Facebook’s minority shareholders.

Zuckerberg’s and Facebook’s high Glassdoor ratings are also something to shout about. This is despite all the negative news surrounding Facebook and Zuckerberg in recent times.

Who Are Facebook’s Competitors?

Some of its listed competitors are:

Despite all the competition, as long as Facebook doesn’t rest on its laurels and keeps on innovating, it should continue doing well.

Globally, the digital marketing sector is expanding along with the increasing penetration of Internet service and mobile devices.

There’s plenty of room for Facebook to grow in this worldwide market.

We mentioned earlier that Facebook monetises at a much higher rate in the US & Canada compared to other regions.

As consumers in the emerging economies gain spending power, businesses in those regions will grow and spend more money advertising to those consumers, which in turn could help Facebook.

The social media giant has not tapped much into its non-Facebook products such as WhatsApp and Instagram, and that can give the company nice growth if it plays its cards well.

For instance, in India, Facebook recently announced a partnership with Jio Platforms in the country.

The largest Facebook and WhatsApp communities in the world are in India, and the company believes “there’s an especially important opportunity to serve small businesses and enable commerce there over the long term”.

Elsewhere, the company is investing heavily in other consumer hardware products and a number of longer-term initiatives, such as augmented reality, artificial intelligence (AI), and connectivity efforts.

With plenty of cash on its balance sheet, it sure has the leeway to experiment its way to business growth.

Facebook has been getting negative press ever since the Cambridge Analytica scandal.

Zuckerberg has been instrumental in Facebook’s growth.

If, for any reason, he leaves or shifts his focus elsewhere, Facebook could suffer.

I don’t see this happening due to Facebook’s wide network effect, but we can’t rule this out.

If there’s an emergence of better social media sites and users move over on a massive scale, Facebook’s ad revenue could be affected.

According to Morningstar, Facebook’s three-year average PE ratio stood at around 29.

Therefore, Facebook seems to be trading at a fair to slightly high valuation.

Considering all the above points, potential investors should discern if it’s worth paying a premium valuation for Facebook.

Why not check out the Seedly Community and participate in the discussion surrounding stocks like Facebook (NASDAQ: FB) and many more!