A Singaporean's Guide To Libra Cryptocurrency 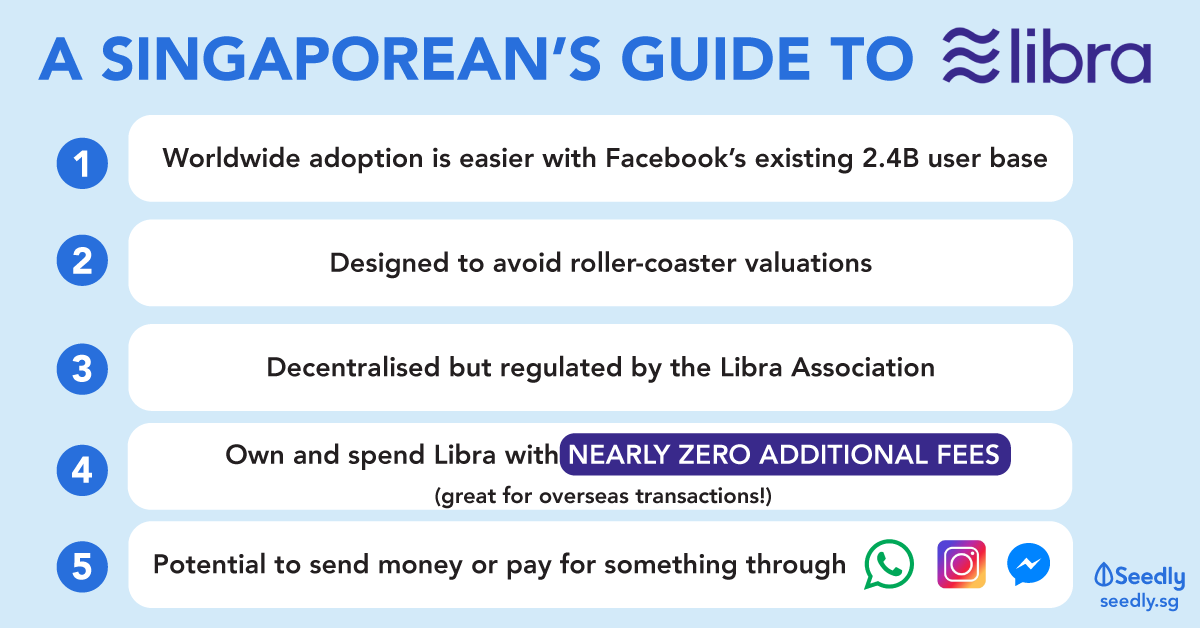 A Singaporean's Guide To Libra Cryptocurrency

It seems like a major world market player has plans to make cryptocurrency mainstream, and surprise, surprise. It’s none other than Facebook.

Considering that Facebook has a knack for making things REALLY simple to use and adopt… I mean, just think about it. 15 years ago, no one was sharing cat memes and letting everyone in their lives know exactly what they’re having for breakfast. EVERY. SINGLE. DAMN. DAY.

To give you some perspective, our world population currently stands at 7.5 billion according to the United States Census Bureau.

So can you imagine what Facebook could do for cryptocurrency if Mark Zuckerberg somehow manages to convince one-third of the world to transact only in Libra?

We wouldn’t only be limited to a pathetic, almost 40-ish businesses in Singapore which accept Bitcoin – according to CoinMap. And we’d probably be saying, “Eh, I Libra you liao” instead of “You accept PayLah or PayNow?” after transferring payment to our friend overseas – with little to no transaction fees involved.

TL;DR: What’s The Fuss About Libra?

In its recently released Libra white paper the Libra Association basically paints it as a “simple global currency and financial infrastructure that empowers billions of people”.

The new currency will be:

For those going, “Damn cheem, please. What does this all mean?”

As always: I gotchu bruv.

Whenever you cash in a dollar equivalent of your local currency, that money goes into the Libra Reserve and an equivalent value of Libra (≋, yep that’s the unicode character for Libra) is minted and issued to you.

And if you choose to cash out of the Libra Association, the Libra you return is destroyed and you’ll receive the equivalent value of your local currency back. Plus, there’s always 100% of the value of the Libra in circulation, and it is collateralised with real-world assets and it never runs fractional.

Unlike other stablecoins – a cryptocurrency that is pegged to a stable asset like gold or arguably, USD – Libra will maintain its own value, which means that it should cash out to roughly the same amount of whatever respective local currency you use, over time.

And they are able to do this because the Libra is tagged to a basket of bank deposits and short-term government securities that consists of a mix of historically stable international currencies (including the dollar, euro, pound, Swiss franc, and yen).

By maintaining the basket of assets, the Libra Association can change the balance of its composition if necessary to offset any major price fluctuations in say… one foreign currency, so that the Libra stays consistent.

This means that your teh o peng (iced tea with sugar but no milk) won’t cost ≋1.30 today, and suddenly cost ≋5 tomorrow because the Singapore dollar depreciated against the US dollar by a landslide. If that happens, I might as well just drink Lipton tea from the pantry sua…

The governance of Libra is all managed by the Libra Association. Think of them as the MAS equivalent of this world’s world currency – except that they’re made of a conglomerate of private businesses, organisations, and institutions (again, more on this in a bit).

Which means that it can go two ways…

One, Libra Association stays true to its vision that “The world truly needs a reliable digital currency and infrastructure that together can deliver on the promise of “the internet of money.”” meaning we’ll truly have a decentralised governance of money which gives people the “inherent right to control the fruit of their legal labour”.

Libra Association decides to anyhow only because Mark Zuckerberg decides to…

By the way, Facebook doesn’t technically own Libra, it’s sharing it as one of the many members that are part of the Libra Association which manages the Libra. Besides, there’ll be way too many rules and regulations put in place by the world government to ensure that this world currency stays decentralised and does not go to the dogs at the whim of one individual or private company.

What Is The Libra Association?

The Libra Association is an independent, not-for-profit membership organisation that is headquartered in Geneva, Switzerland.

According to the Libra website, all members of the Libra Association will consist of “geographically distributed and diverse businesses, nonprofit and multilateral organisations, and academic institutions.”

For now, the founding members include:

Note: the members in bold are those that I believe are of interest to Singaporeans. The fact that they’re participating in this endeavour is a testament that if Libra takes off, we’re going to be seeing a lot of changes to the way we can pay for services rendered by these companies.

One of the biggest advantages of cryptocurrency and blockchain is that there will be no centralised entity to control our finances – be it banks or governments.

And the first thing I can think of with regard to the worldwide adoption of Libra will mean that banks can’t do stuff like charging us cross-border transaction or foreign exchange fees for our overseas transactions!

But will Libra be truly decentralised? After all, it IS a Facebook initiative.

And with the recent Cambridge Analytica scandal, where the personal data of about 50 million Facebook users was misused… you can see why many might suspect that Facebook will use Libra as a means of gathering financial data on its users.

Which is probably why Facebook had the foresight to create the Libra Association as a means to share the control of Libra.

So how much stake do the other members have in Libra?

Well, reports state that each member must invest at least US$10 million to join, and they will be granted their own node in the Libra ecosystem. The Libra Blockchain is managed by nodes, which are servers that help operate the blockchain that makes the Libra currency possible. Oh, and while we’re on this, Libra Blockchain is a cryptographically authenticated database that can handle 1,000 transactions per second.

And that’s faster than Bitcoin’s 7 transactions per second or Ethereum’s 15.

Each member, including Facebook, will only get up to one vote or 1% of the total vote (whichever is larger) in the Libra Association council. Although according to the Libra White Paper, while “final decision-making authority rests with the association, Facebook is expected to maintain a leadership role through 2019”.

But with Facebook leading the way with Libra, the problem of adoption is already mitigated through its existing user base of 2.38 billion monthly active users as well as – probably – billions more combined users under the various members in the Libra Association.

What would happen if 2.38 billion active users around the world switched to Libra?

So, I’ve taken you through the basics of Libra:

And you can do all of this through Calibra, a new subsidiary of Facebook that was launched to build financial services and software on top of the Libra Blockchain. Basically, an e-wallet for Facebook to transact Libra through.

Considering that Facebook already owns Whatsapp, Instagram, and Messenger, it’s not out of the question for users to potentially be able to send and receive Libra payments via Calibra through a simple Whatsapp message, an Instagram DM, or even through a text message via Messenger in the very near future…