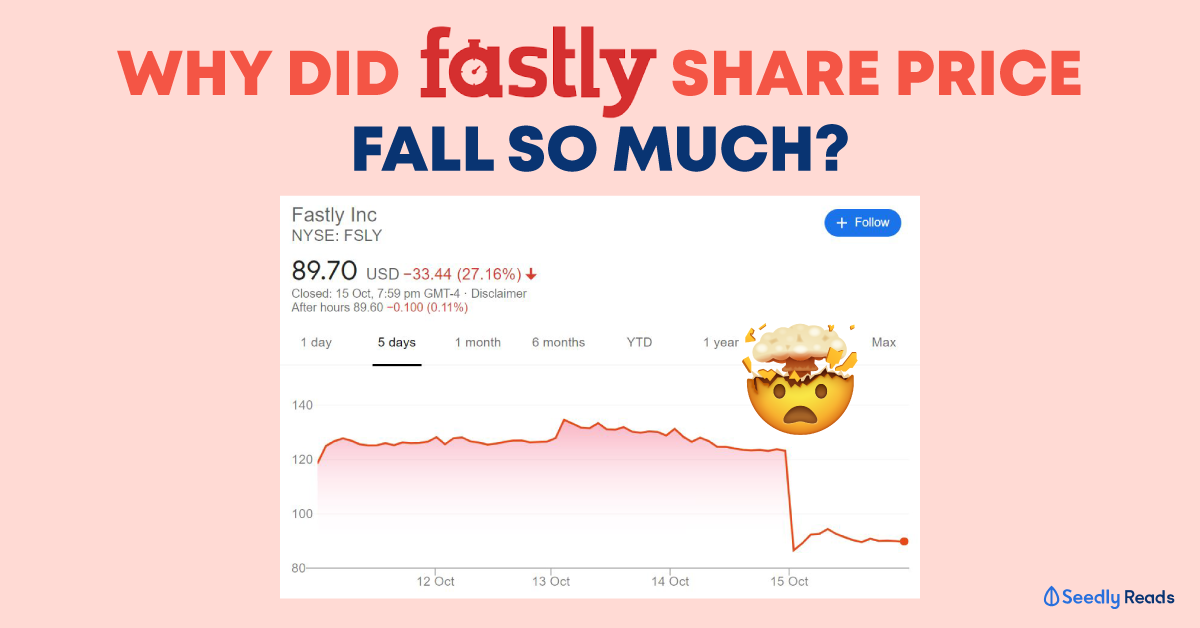 Fastly (NYSE: FSLY) Share Price: Why Did It Plunge 27% Today?

Fastly (NYSE: FSLY) is a provider of an edge cloud platform, helping its clients deliver content much faster to end users like you and me.

Investors in Singapore would have woken up to see Fastly’s share price down 27% to US$89.70 this morning.

Yesterday, after the US stock market closed, Fastly announced that it expects its third-quarter 2020 total revenue to be lower, in the range of US$70.0 to US$71.0 million, compared to its previous guidance of US$73.5 to US$75.5 million.

There were two reasons cited:

1) The impact of an uncertain geopolitical environment has caused the usage of Fastly’s platform by its largest customer not to meet expectations, resulting in a significant reduction in revenue from this customer.

2) A few of its customers had lower usage than Fastly had estimated in the latter part of the third quarter.

It’s no secret that Fastly’s largest customer is ByteDance, the operator of TikTok.

In its 2020 second-quarter, the company already warned that a ban on TikTok by the US government will hit Fastly’s business.

It said (with emphases):

“ByteDance, the operator of the TikTok application, operates in and has strong business ties to China and is our top customer, accounting for 13% and 12% of revenue for the three and six months ended June 30, 2020, respectively. On August 6, 2020, President Trump issued an executive order banning transactions with ByteDance, effective 45 days after the execution of the order. The TikTok application has also been the subject of a ban in other countries. While we are still assessing the impact of these bans, the ban of the TikTok application by the U.S. government, and any other governments, creates uncertainty around our ability to support ByteDance. The loss of this customer’s traffic could have a negative impact on our business.”

A risk with Fastly’s business, which is customer concentration, has played out. For its trailing 12 months ended 30 June 2020, Fastly’s top ten customers accounted for around 33% of revenue.

What Next for Fastly?

In Fastly’s latest announcement, chief executive Joshua Bixby, mentioned that it believes the “fundamentals of Fastly’s business remain strong, as does demand for our platform”.

Fastly will announce its 2020 third-quarter financial results after market close on 28 October 2020.

It will also provide updates on its combined business outlook after completing the acquisition of Signal Sciences, a web application security company.

The purchase will allow Fastly to provide well-rounded security solutions to its clients that were previously not possible.

Fastly’s current P/S ratio is still at the higher-end of its historical range.

But if the company can quickly fill up the vacuum left by ByteDance and at the same time, diversify its customer base further, it could be a buying opportunity for long-term investors who believe in the business.

Why not check out the SeedlyCommunity and participate in the discussion surrounding stocks like Fastly and many more!

Disclaimer: The information provided by Seedly serves as an educational piece and is not intended to be personalised investment advice. ​Readers should always do their own due diligence and consider their financial goals before investing in any stock. Image credit on cover artwork: Google Finance