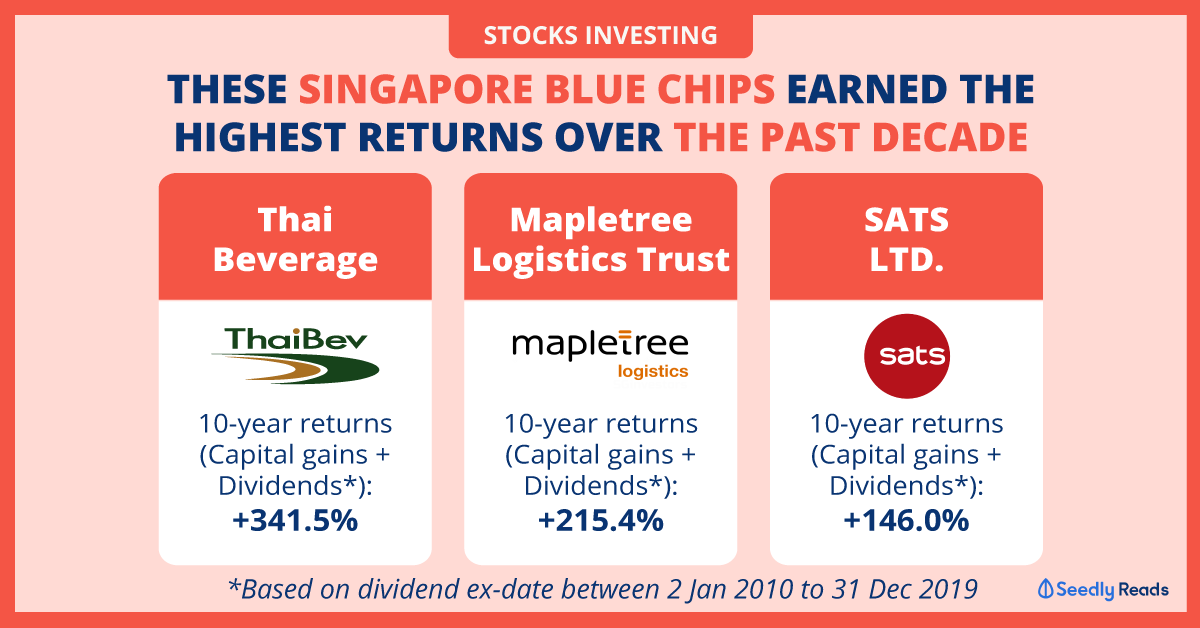 In this article, we will look at the three best-performing Singapore blue chips over the past decade (2010-2019) and identify the factors for their success.

These are the three best-performing Singapore blue chips over the past decade:

If you’ve been a long-time investor of Thai Beverage, Mapletree Logistics Trust, or SATS, give yourself a pat on the back!

Compared to the Straits Times Index (STI), they all soundly beat the index ETF which only generated a 42% total return over the past ten years.

Let’s have a quick look at what drove business growth and the performance of these three blue-chip stocks over the past decade:

Thai Beverage Public Company Limited or ThaiBev (SGX: Y92) is a Thailand-based company that produces and distributes beverages for sale mainly in Thailand and Vietnam.

It has four operating segments:

ThaiBev has relied on the following strategies for growth:

1. Establish itself as the leading regional beverage producer by collaborating with the largest beverage players in local and overseas markets

For example, it acquired significant stakes in:

In 2008, Thaibev entered the non-alcoholic beverages market with a 43.9% acquisition of Oishi Group, the top green tea beverage producer in Thailand.

Oishi Group also owns a chain of Japanese restaurants in Thailand and is publicly listed on the Stock Exchange of Thailand.

It does so through continued product innovation and the introduction of modern packaging for its products.

In 2017, Thai Bev also revamped the packaging of the ‘Blend 285’ and ‘Blend 285 Signature’ products in the brown spirits segment.

They were enhanced with a glamorous image that featured a capsule cap as its brand identity.

Interestingly, this mirrors that of premium international spirits.

Mapletree Logistics Trust or MLT (SGX: M44U) is a REIT which owns logistics properties across Asia.

MLT has a diversified sector and geographic base, which means it is not over-reliant on a single sector or geography.

1. Organic growth from its existing portfolio

MLT has improved its assets’ performance through asset enhancement initiatives:

Yield accretive acquisitions create value for unitholders by increasing the distribution per unit paid to unitholders.

This is despite the increase in units which happens when the company takes to the equity markets to raise funds to acquire properties.

MLT has made yield-accretive acquisitions over the years:

MLT’s leverage ratio has consistently been below 40% at the end of each financial year.

Over the years, MLT has consistently kept a well-staggered debt maturity profile.

This ensures MLT will not be pressured to meet huge financial obligations if a significant portion of its debt expires in a single financial year.

SATS (SGX: S58) is a food and logistics company best known for managing most of the ground-handling services and in-flight catering at Singapore’s Changi Airport.

SATS has two operating business segments (in brackets are each segment’s percentage of sales revenue in 2019):

SATS has relied on the following strategies for growth.

1. Innovated and increased productivity in its food solutions and gateway services segments over the years

In food solutions, SATS has continued to transform its inflight catering kitchens by introducing autonomous guided vehicles that transport food items between store and assembly lines, reducing the demands on staff and improving efficiency.

In its gateway services segment, SATS has partnered with CAAS and the Singapore Aircargo Agents Association to pioneer an initiative to digitise the process of export clearance for airfreight.

2. Deepening its partnerships in overseas markets

For example, in its gateway services, SATS formed a joint venture with AirAsia to handle ground operations.

In India, SATS formed a joint venture with Cargo Services Centre to manage an international cargo terminal in Mumbai.

In its food solutions segment, SATS strengthened its leading position by securing 11 new and returning customers including Air France and Finnair at Changi Airport in FY14/15.

It has also added scale to its overall institutional catering business.

In 2013, Singapore Sports Hub appointed Sports Catering Services as its exclusive caterer across five of its venues.

Note: SCS is a joint venture between SATS and Delaware North Companies, with SATS holding a 70% stake in the partnership.

While the STI has displayed rather lacklustre growth (42%) over the past decade.

We’ve seen that a handful of Singapore blue chips that have performed remarkably well – ThaiBev’s total return of 341.5% translates to a compound annual growth rate of 16.0%.

Dividends also made up a sizable proportion of total return for our top three Singapore blue chips.

In the case of Mapletree Logistics Trust and SATS, dividends nearly equalled the stocks’ capital gains over 10 years.

One final note here: past performance is not an indicator of future results.

Whether these stocks will continue to perform as well in the new decade remains to be seen.

As investors, our role is to do our due diligence and decide if a stock fulfils all our criteria for investment.

Got a question about Singapore blue chips? Our friendly SeedlyCommunity might be able to help you with your questions or provide you with alternative perspectives!