Singapore Blue Chips: Are They a Good Safe Haven Investment? 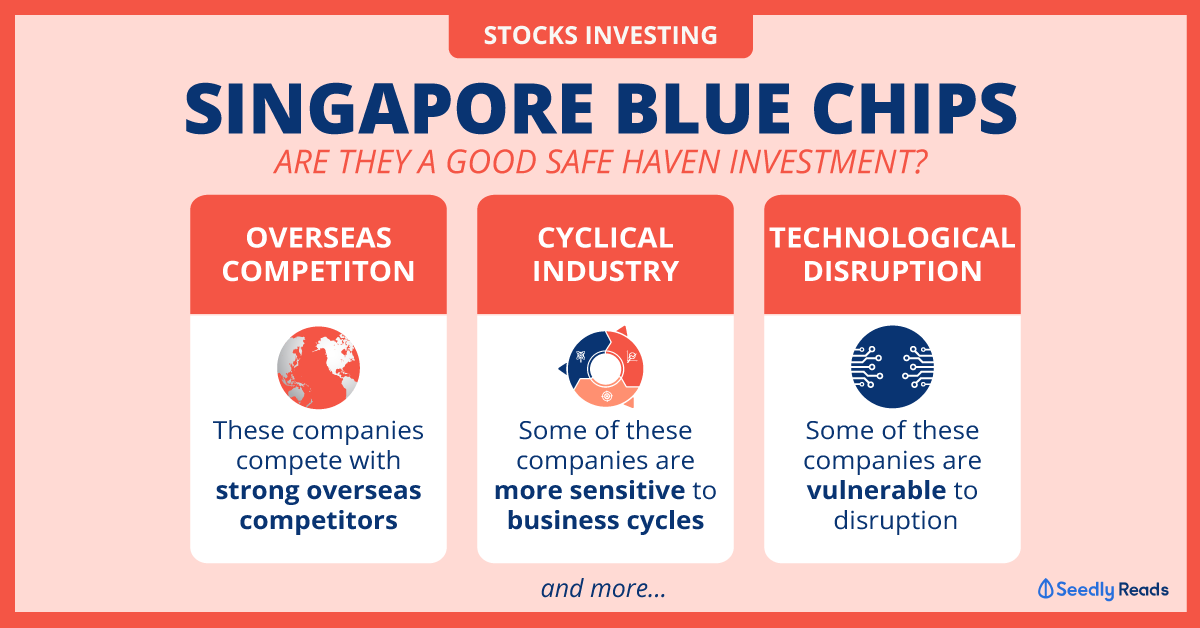 Singapore Blue Chips: Are They a Good Safe Haven Investment?

Blue-chip stocks are shares of larger, well-established companies with a long track record of financial stability and performance.

These companies normally have national brand recognition and are leaders in their industry.

A blue-chip stock is also usually included in major market indexes that serve as a benchmark for the country’s stock market.

For example, blue chips like the Facebook, Amazon, Apple, Netflix and Alphabet (FAANG) stocks are included in the S&P 500 index, which measures the stock performances of 500 large companies listed on the U.S. stock exchanges.

Singapore’s S&P 500 equivalent is the Straits Times Index (STI). The STI tracks the performance of the top 30 companies listed on the SGX.

Hence, STI component stocks can be considered as Singapore’s blue chips that are listed on the SGX.

Here is a full list of the STI component stocks and their company information.

Pros and Cons of Blue-Chip Stocks in Singapore

Blue chips are known for their predictable and steady business operations. Hence, their strong business models, balance sheets, and cash flows ensure their continued dominance in their respective industries.

Even in times of economic downturns, blue chips are more financially resilient than smaller companies and can recover faster.

Blue chips, compared to smaller companies, have less of a need to reinvest their profits in themselves. Thus, they are able to distribute their excess earnings to their shareholders.

Blue chips are large-cap companies whose businesses have already matured and stabilised. They are unlike small or mid-cap companies that are still at their development stages with a longer runway for growth.

Of course, the downside is that developing companies may not always turn out successful. Hence, investing in blue chips might be lower risk, but also gives you correspondingly lower growth.

Investors can usually only get their hands on blue chips at a discount when quarterly results are poor, there’s a scandal involving the company, or the overall market is doing badly (e.g. COVID-19 pandemic).

Investors should not naturally assume that Singapore blue chips are always safe due to a few reasons:

Singapore blue chips are also exposed to international competitors, who can offer their goods and services at a lower cost or higher quality.

For example, Singapore Airlines (SIA) used to be able to differentiate themselves in the airline industry with ‘innovation, superior service, and consistently high profitability’. It was also one of the few airlines that could buy new planes in a financially comfortable position due to its strong balance sheet.

However today, rival carriers like Qatar Airways with government support, secular growth in air traffic, lower oil prices have increased their profitability too. They have also caught up with the supreme service standards that used to differentiate SIA from the rest.

Moreover, the growth of budget airlines like Air Asia has also offered travellers cheaper options compared to the premium SIA brand. Unfortunately, a crisis like the COVID-19 pandemic has also pushed SIA’s share price to an even lower bottom than during the 2008 Global Financial Crisis.

Some large companies operate in industries that are sensitive to business cycles. Because of this, their revenue and profit can be affected by cycles or factors which are largely beyond their control.

For example, Wilmar International is among the largest palm oil producers in the world. And even though the conglomerate has diversified it’s business operations downstream, it is still affected by fluctuating palm oil prices.

In fact, Wilmar’s share price over the last five years has roughly mirrored the peaks and troughs of palm oil prices.

So if you’re looking for a stable blue-chip stock as an investment, Wilmar may not be your cup of tea.

This poses a threat to companies who do not change and adapt fast enough to keep up with the times, and threatens to undercut the viability and efficiency of their business models.

Institutionalised practices and the resistance to change are major factors that leave blue chips particularly vulnerable to disruption.

Take the news media industry for example. With the decline in print circulation and advertising, players need to be more aggressive in digitally transforming themselves to remain competitive.

Unfortunately, blue chips like Singapore Press Holdings (SPH) have struggled to deal with the technological changes in the newspaper advertising business. As a result, SPH’s operating margins, revenue, and dividend payouts have decreased over the past five years.

On the flip side, DBS has been rapidly investing in digital innovation, and the bank’s digital transformation efforts are increasingly gaining global recognition.

Despite some of the troubles plaguing Singapore’s blue chips in recent times, the question is: Would Singapore blue chips still be a great long-term investment?

Here’s a look at how much the 10 largest Singapore blue chips (in terms of market cap today) would have made you if invested in them over the last 10 years:

If you invested equally in all 10 stocks, your total portfolio return would have been 94.2%, this translates to a Compound Annual Growth Rate (CAGR) of only 6.9% — decent, but not incredible.

In contrast, U.S. blue chips like Amazon, Alphabet, Nike, Starbucks, etc. can offer much higher returns over the same period. U.S. blue chips naturally have longer growth runways due to their larger domestic market and the fact that many large U.S. companies also tend to expand worldwide successfully.

But if investing in Singapore’s blue chips gives you just that modicum of familiarity and comfort, a CAGR of 6.9% isn’t all too bad. And if you like passive income, Singapore blue chips tend to pay a decent amount of dividends which are tax-free in Singapore.

Got a question about Singapore blue chips? Why not check out the SeedlyCommunity to get your questions answered and to hear from different perspectives?