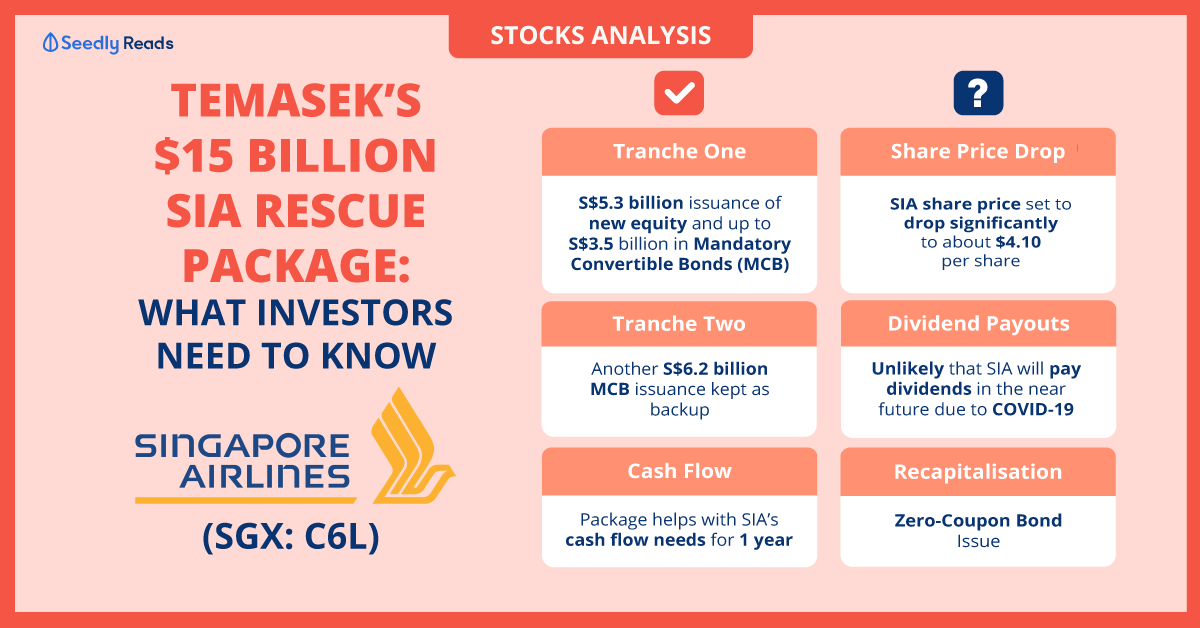 Singapore Airlines: What Does Temasek’s Rescue Package Mean for Investors?

On 26 March 2020, Singapore Airlines or SIA (SGX: C6L) announced a S$5.3 billion issuance of new equity and issuance of up to S$9.7 billion in Mandatory Convertible Bonds (MCB).

Temasek, SIA’s largest shareholder with a 55.46% stake in the company, committed to subscribing its pro-rata share of the new money and to underwrite any balance that is not subscribed by other existing shareholders.

The first tranche is worth S$8.8 billion and it involves S$5.3 billion in equity rights and S$3.5 billion in rights MCB issuances.

The second tranche is another MCB issuance worth S$6.2 billion which will be issued within 15 months of being approved by shareholders. Given the uncertainty as to the recovery of global travel demand, the second tranche is essentially a back-up should the initial S$8.8 billion be insufficient.

Exhibit 1. Summary of the Rescue Package

This is a significant recapitalisation of the airline, in response to the negative business impact due to the outbreak of COVID-19.

To understand the value of this injection, we compare the size of the proposed first tranche against the value of SIA’s current shareholders’ equity and immediate cash needs.

Compared to the book and market values of SIA’s shareholders’ equity, the first tranche amount is significant. This unprecedented injection will ensure the continued viability of the business. SIA’s balance sheet will be significantly transformed as a result.

The company’s leverage ratio (measured by debt to equity) will drop to 0.4 from 0.7.

This will provide sufficient cushion against the risk of a default, a scenario where all stakeholders would be best served to avoid.

How Long Can This New Money Last SIA?

More importantly, the injection will ensure SIA meets its liquidity needs for about one year in their current state of significantly reduced capacity.

The following liquidity analysis focuses on the requirements for operating cash flow, capital expenditure (CAPEX), and other fixed commitments such as debt and interest payments.

Of the S$8.8 billion, S$3.7 billion is budgeted for operating cash flow.

To better understand the operational needs of SIA, we analyse their operating expenses in the last twelve months (LTM) which ended 31 December 2019.

Note: depreciation is excluded from operating expenses as it is a non-cash expense.

Due to a lack of information, we were not able to ascertain the level of fixed and variable components of these expenses.

We assumed various levels of haircuts to operating expenses based on SIA’s announced 95% cut to capacity. Due to the grounding of aircraft, we expect an increase in parking charges which is accordingly reflected.

After incorporating the capacity cuts, the projected operating expenses could be reduced to S$3.2 billion for one year.

We expect that the budgeted S$3.7 billion, after considering unexpected costs, to be comfortably sufficient for one year’s worth of reduced operations.

In terms of CAPEX, S$3.3 billion is budgeted. Based on SIA’s financial disclosures, CAPEX was S$5.1 billion based on LTM 31 Dec 2019. CAPEX spending for SIA is predominantly for the fleet of new planes which SIA purchases for its operations.

Depending on SIA’s ability to defer payments for the deliveries of its aircraft — which depends on SIA’s negotiating power with aircraft manufacturers such as Boeing and Airbus — the budgeted amount seems to be able to cover between 9-12 months’ worth of payments.

Finally, in terms of meeting its debt and other fixed payment obligations, the budgeted amount of S$1.8 billion will be able to meet slightly more than a year’s worth of payments.

Based on SIA’s financial disclosures, the amount of debt due in one year is S$835 million as of 31 Dec 2019. Adding annual interest expense of about S$200 million, the total annual payments on debt and interest totals slightly more than S$1 billion.

In summary, the financial package undertaken by Temasek in addition to SIA’s existing S$1.5 billion of cash on its balance sheet as of 31 December 2019, will support the company’s cash flow needs for at least the next year.

If global travel demand does not pick up by then, the additional MCBs of S$6.2 billion will likely be activated to cover additional operational cash requirements.

What Does This Mean for Investors?

The share price of SIA will drop significantly, especially after the rights issuance is completed.

Therefore, the only way to protect your current position is to take part in the rights issuance at $3 per share and average down the cost of your holdings.

This increases your potential upside when the company eventually recovers when global travel demand picks up.

The implication is that as an investor, you will need to have capital to subscribe pro-rata to this additional issuance.

For example, if you currently own 1,000 shares in SIA, you will need S$4,500 ready to take part in this rights issuance.

Not subscribing to the additional rights issuance will result in the significant dilution of your stake in SIA.

Assuming you currently own a 1% stake in SIA and do not take part in the rights issuance, your stake will be immediately diluted to 0.4% post-rights issuance.

If you also include the potential dilution from the mandatory convertible bonds, your eventual stake is even less.

This is important because your claims to future dividends in SIA will be significantly reduced as a result of this dilution.

In addition to the availability of capital, you will need to be patient as an investor.

It is anybody’s guess when operations will resume back to normal. This is the most crucial factor determining when you can realise the potential upside to your investment.

It is also crucial to note that it is unlikely that SIA will pay any dividends in this period of reduced capacity.

Therefore, be prepared to ride out the downturn.

If it helps, you may take comfort as an investor because Temasek has got this.

Temasek’s willingness and ability to stand by SIA in this crisis are clearly demonstrated with the timeliness and size of this package.

Therefore, downside risk can be said to be mitigated by the backstop liquidity provided by Temasek.

The upside rewards, however, depend entirely on the timeline for recovery.

Finally, if you have additional capital and want to diversify your investment portfolio, subscribing to the rights MCB is an option.

The first reason is that the coupon on the MCB is attractive.

The tenure is for ten years and the coupon on the MCB is at 4% per annum for the first four years, 5% per annum on the next three years, and 6% in the final three years.

What you will need to consider here is that this is a zero-coupon bond, i.e. the accumulated interest will be paid whichever comes first — when SIA redeems the bond or when the bond’s maturity date is reached.

Did you know that there are other investors discussing about stocks like Singapore Airlines (SGX: C6L) in our SeedlyCommunity?

Check it out now!