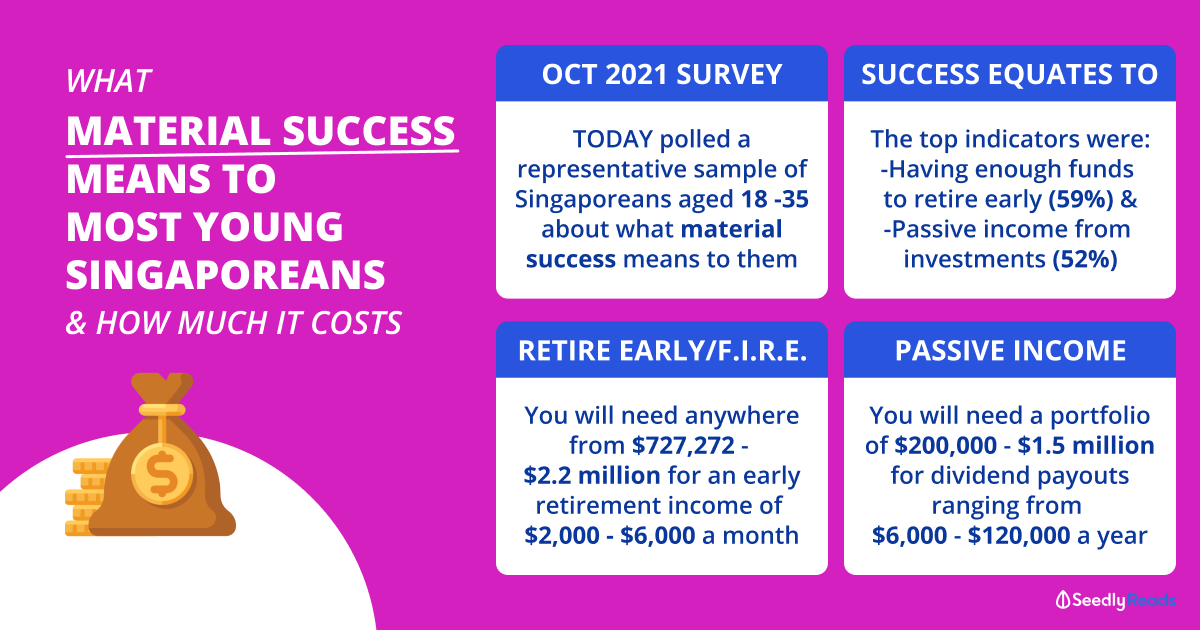 Today’s youth have a slightly different definition of career and material success, according to the recent TODAY Youth Survey 2021.

For this survey, the news outlet polled:

1,066 respondents aged between 18 and 35 at the start of October (2021) about their views regarding various social issues, their goals and their sentiments about the pandemic.

By and large, the survey findings painted a picture of the younger generations still grappling with the emotional, mental and economic impact of living through a crisis that has affected every aspect of their lives.

In addition, the surveyors polled respondents about what they thought the top indicators of career and material success were in Singapore:

More than half of the respondents polled answered that having enough money to retire early and a passive income from financial investments were the top two indicators.

Safe to say, these two goals would require a considerable amount of money to achieve.

TL;DR: What Material Success in Singapore Means to Most Youth and How Much It Costs

What Do Young Singaporeans Want?

Granted, the results of the survey must be read in the context of the COVID-19 situation.

In an interview with Today, Mr Praveen Nair, a counsellor at Raven Counselling and Consultancy, stated that:

Thus, it is not surprising that having ‘enough funds to retire early’ and ‘achieving a passive income from financial investments‘ are the top priority for the youth in Singapore.

After all, you have to remember that achieving these financial goals is just a means to end a desirable lifestyle.

Once you have enough funds to retire early or have enough passive income streams, it opens up a sea of options as work become optional.

First up, let’s address the elephant in the room.

About three out of five young Singaporeans indicated that having enough funds to retire early was the top indicator of material success.

Naturally, this would mean that they want to achieve Financial Independence Retire Early (FIRE) in its original form or traditional FIRE.

For the uninitiated, the Financial Independence, Retire Early (FIRE) movement is a lifestyle movement whose goal is financial independence and retiring early.

Before continuing, it is essential to understand the wealth ladder in detail and take note of Level Five, which is Financial Independence, where your passive income generates enough to cover your current living expenses.

Cost of FIRE in Singapore

Many followers of the FIRE movement suggest that you would need to save about 30 times your estimated annual living expenses at the point of your desired retirement age.

Based on this formula, you will be able to withdraw 3.3% of your investment portfolio to cover your yearly expenditure without touching the initial capital you have invested.

using forward-looking estimates for investment performance and inflation, we estimate that the standard rule of thumb should be lowered to 3.3% from 4.0%.

Assuming a balanced portfolio, fixed real withdrawals over a 30-year time horizon, and a 90% probability of success (that is, a high likelihood of not running out of funds over the time horizon).

This is the Safe Withdrawal Rate (SWR): the estimated percentage of your net worth that you expect to withdraw to cover your living expenses in retirement.

So, for example, you can simply refer to this chart to understand the approximate FIRE amount you need if you would like to retire early:

To help you figure out how much you need to FIRE, you can also refer to our Financial Independence Retire Early (FIRE) guide and use this excellent FIRE calculator made by Andrew, the author of WalletBurst.

Here are a couple of Andrew’s assumptions that I have localised:

As you can see above, achieving an early retirement is not easy.

You will have to hustle and work really hard and smart for the first 10 years of your life if you want to retire at 35, 40 or your desired retirement age.

This involves quite a bit of sacrifice as you might have to typically forgo short term comforts and be remarkably frugal about spending depending on how much you earn,

Not to mention that you will need to save aggressively and invest to achieve financial independence and retire early.

While this is achievable, you will have to forgo many comforts and face the risk of burnout and health issues in the pursuit of traditional FIRE.

How To Earn Passive Income From Investments

The next most popular indicator would be to achieve a passive income from financial investments.

One way to achieve a passive income from financial investments would be to build a dividend income portfolio.

Dividend stocks are stocks that give dividend payouts based on their profits over the year. Should an investor invest in a dividend stock, he receives income in dividends given out by the stock.

The Rule of the Dividend Income Portfolio Building Game

Imagine this: Your investment portfolio gives you enough every year to a point where you no longer have to depend on your salary for your expenses.

That is the goal of every investor, and this is how to build a dividend income portfolio:

So here is how much you need depending on the dividend you desire: 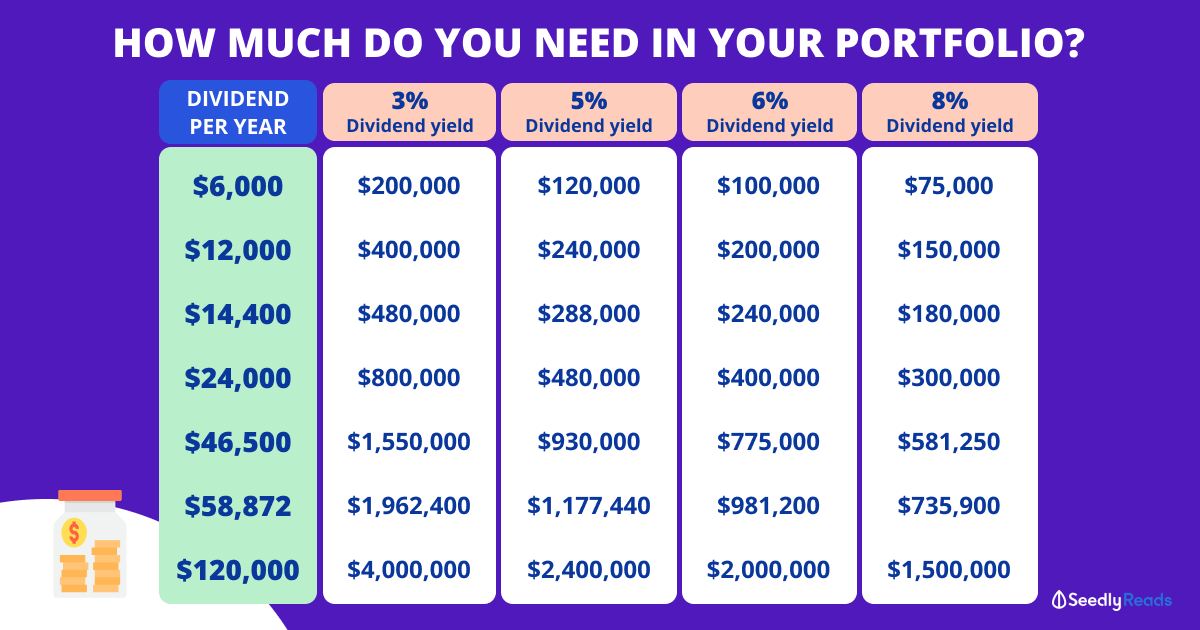 Granted, this is just an overview.

Do read our full article for a more in-depth look at this strategy.