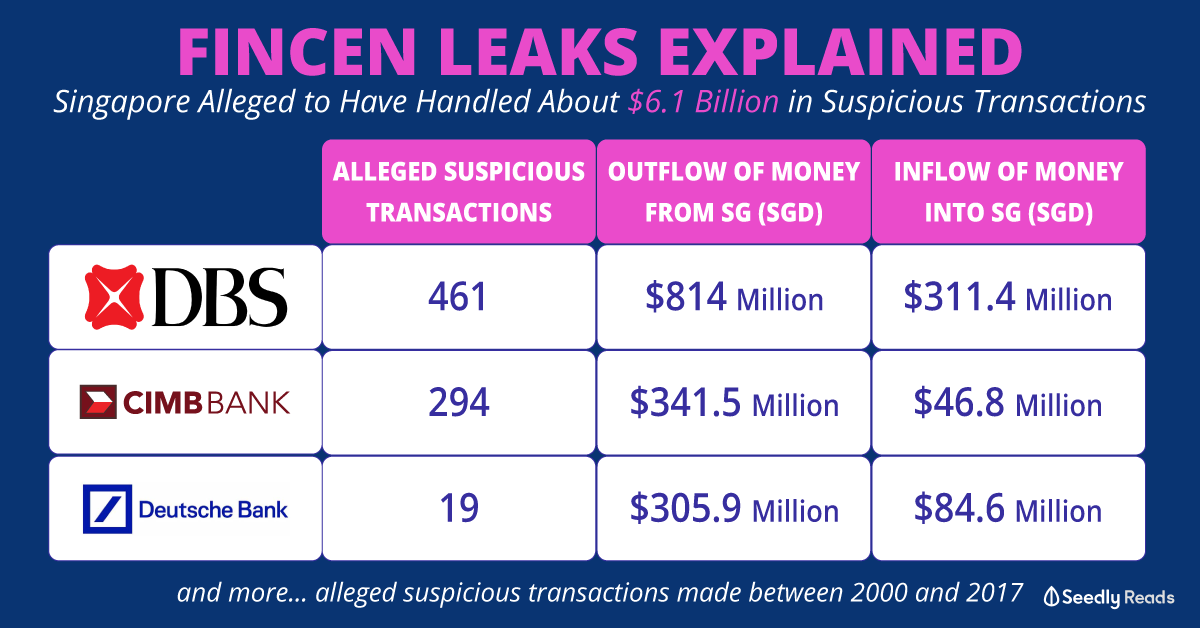 This is the alleged amount that is being moved around.

Reports from the International Consortium of Investigative Journalists (ICIJ) based on leaked documents sent to BuzzFeed News, have revealed that about 200,000 suspicious transactions worth a staggering US$2 Trillion (S$2.7 trillion) were processed by banks around the world.

These transactions were recorded between 1997 and 2017.

To put this amount into context, the whole of Singapore’s Gross Domestic Product (GDP) is only US$372.06 billion.

Jeff Bezos the world’s richest man’s net worth pales in comparison as it is ‘only’ US$175.3 billion (at time of writing).

These leaks reveal that these banks have played a role in allowing criminals to move dirty money around the globe for years.

The reports also state that banks in Singapore like DBS Bank, CIMB Bank and Deutsche bank processed about US$4.5 billion (S$6.13 billion) of such suspicious transactions between 2000 and 2017.

Here is all you need to know about the leaks!

Note: as the story is still evolving, we will update this article with any new developments.

What Are the FinCEN Files?

The FinCEN files refer to the 2,657 documents sent to the US Financial Crimes Enforcement Network (FinCEN) between 2000 to 2017. 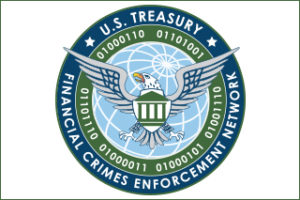 FYI: FinCEN is a bureau of the United States Department of the Treasury that collects and analyzes information about financial transactions in order to combat domestic and international money laundering, terrorist financing, and other financial crimes.

These documents were leaked to Buzzfeed News who then went on to share them with the ICIJ and more than 100 news organizations in 88 countries.

The FinCEN leaks are unprecedented as the documents are from numerous banks around the world instead of just one of two banks.

They bring attention to a whole host of potentially illicit activity carried out by individuals and companies through the banks.

From these documents, there are about 2,121 suspicious activity reports (SAR) sent to FinCEN by the banks.

SARs are filed by banks who suspect that their clients are involved in suspicious activity like:

In the FinCEN Files, the main reason cited for filing SARs was due to suspicion of money laundering.

It is important to note that these suspicious activity reports (SAR) are not concrete proof of any wrongdoing or financial crime or that that the transaction is illicit.

In addition, strange transactions can refer to significant increases in cash deposits of any individual or business that is out of the ordinary, especially if such deposits are almost immediately transferred out within out of the account, to other parties not usually associated with the customer.

Moreover, banks are usually tasked with the responsibility to highlight strange transactions so that regulators can follow up on them.

BuzzFeed News also added that most SARs are ignored or not acted upon.

Typically, once a bank has filed a SAR, it is nearly impossible for the authorities to prosecute the bank or its employees, even if they continue facilitating the suspicious activities and collecting their cut.

Altough they do no provide concrete proof of a crimes, SARs can provide vital information that may help with the investigation.

This begs the question…

Why has FinCEN allowed this to go on for so long?

Who Are the Banks Involved?

According to ICIJ reports based on the FinCEN files, JPMorgan, Deutsche Bank, Standard Chartered, Bank of New York Mellon and Barclays were the top five banks processed the largest sums of allegedly suspicious transactions.

Most notably, HSBC cracked a spot in the top 10 as well.

In addition, ICIJ noted that many banks mentioned in the FinCEN leaks frequently processed transactions from companies who registered under “secrecy jurisdictions.”

In other words, the banks processed these transactions without knowing the true identity of the actual owner of the account, adding that:

“At least 20% of the reports contained a client with an address in one of the world’s top offshore financial havens, the British Virgin Islands, while many others provided addresses in the UK, the US, Cyprus, Hong Kong, the United Arab Emirates, Russia and Switzerland,” it said.

Singapore was also named in the reports.

According to the ICIJ, a total of about 1,781 suspicious transactions were conducted in Singapore, with inflows of US$3 billion (S$4.09 billion) and outflows of US$1.5 billion (S$2.04 billion).

In addition, between 2000 and 2017, banks in Singapore are alleged to have processed about US$4.5 billion (S$6.1 billion) in total, with DBS Bank, CIMB Bank and Deutsche Bank reportedly handling the biggest amount of money locally.

Also, other local banks UOB and OCBC were mentioned, with UOB and OCBC reported to have processed about 500 and 62 suspicious transactions respectively.

How Has This Piece of News Affected Stock Prices?

After the news broke on Monday (21 September) the share price of banks like Deutsche Bank, HSBC and Standard Charted that were mentioned by the FinCEN leaks dropped.

From Monday to Tuesday, the share prices dropped by:

In a response to Channel News Asia, the Monetary Authority of Singapore (MAS) stated on 21 September that it is “closely studying” the FinCEN leaks and the media reports that has named Singaporean banks with potentially suspicious transactions that were flagged to the US Government.

MAS added that it will “appropriate action” based on the outcome of its review.

What Are Your Thoughts on This Whole Saga?

Did these leaks affect your faith in the local banks? Share your thoughts with the SeedlyCommunity!