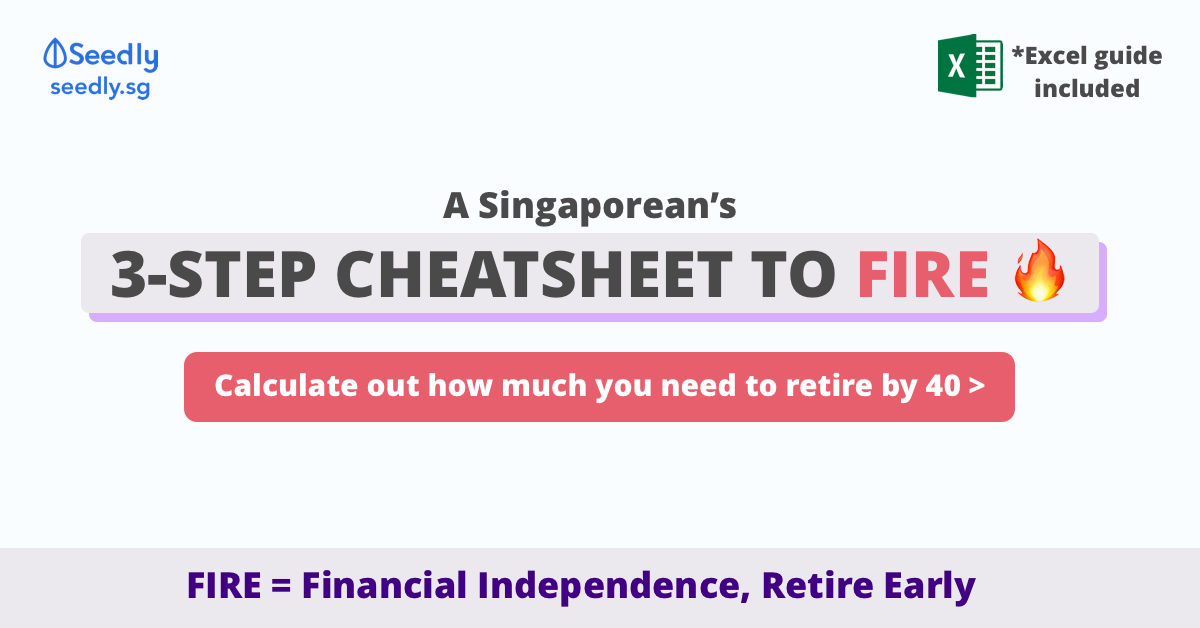 It is definitely true that Millennials perceive retirement quite differently from the Baby Boomers generation.

Particularly in Singapore, with the growing fascination of travel and retiring early. Coupled with the fact that we’re the most connected generation in decades on social media.

Look at this IG account of a travelling family, isn’t this the new Singaporean Millennial dream? 🙂 I kid…

“I’m Always Tired At Work, When Can I Retire To Travel The World?”

How often have you met colleagues at work who have been throwing out the idea over lunch, that they are often tired with work and would be planning to save up enough money to quit and start travelling across the world or doing what they really love.

To set some context, I am writing this from a perspective as a fellow millennial as well, and hopefully speaking and connecting with many others aged between 20 to 35 years old who may be reading this article.

TL;DR: If You Want To Retire Early, You Have to Save and Invest Aggressively

I will share the ideas around FIRE (Financial Independence Retire Early) and thereafter some very proactive steps via a simple downloadable google sheet for you to join in this movement if you are keen to retire early.

Before I continue, I must admit that the definition of retirement varies across many different folks, but for the context of this article, it will mean basically you have enough savings and paid work becomes optional.

The Seedly Guide On FIRE

I have broken down this series into 8 simple parts, which will get you from a total noob into someone who understands the basic idea of FIRE for you to take it to the next level.

Most importantly, I would really love it for those who are also on track to FIRE or planning to share your expert opinions on this piece and other strategies as well on our site, I created a topic (FIRE Movement) especially for this. If you have questions, feel free to ask me directly on the QnA platform as well.

P.S For our fellow NSmen/NSF reading this, it’s not the ‘Fire Movement’ in the SAF terms.

Okay, bad joke, on to the serious stuff… 1) What Exactly Is FIRE?

The FIRE (Financial Independence, Retire Early) movement is a lifestyle movement whose goal is financial independence and retiring early.

The movement became popular among millennials in the 2010s, and gained traction through online communities (like Seedly) and via information shared in blogs, podcasts, and recently, amazingly drawn comics eg. The Woke Salaryman. Well done to many of these sites!

In fact, it’s been 3 years since we started Seedly. But only since I’m starting to experience it and understand why it’s something worth considering. Thus we thought, why not cover it in detail with more data points as well.

Before continuing, it is important to understand the wealth ladder in detail and take note of Level 5, which is Financial Independence, where your passive income generates enough to cover your current living expenses.

Those seeking to attain FIRE intentionally maximize their savings rate by finding ways to increase income or decrease expenses.

The objective is to accumulate assets until the resulting passive income provides enough money for living expenses in perpetuity. (until you die)

Upon reaching financial independence, paid work becomes optional, allowing for retirement from traditional work decades earlier than the standard retirement age. (as shared earlier the ideal for most Singaporeans would be between 40 to 50 years old)

Many followers of the FIRE movement suggest that you would need 25 times your estimated annual living expenses.

So for example, you can simply refer to this chart to understand what is the FIRE amount you need.

In Singapore, as of today, there are two magical things that happen to you in your later stage in life:

You can factor these in as well when you do your planning, but do take note that if you retire at 40 years old, there will be a 15 years gap before your can withdraw your CPF amounts.

4) A Simple Strategy To FIRE

As shared above, the idea of FIRE is to save aggressively and invest passively.

To simplify things, I will only factor constant income and expenses, and neglecting investment returns.

We can observe that, by varying the savings rate:

However, please don’t go crazy and save 100% of your monthly income, because it would not be sustainable and is meant to be used as an illustrative purpose only.

Conclusion: To get to retirement in 10 years, you have to hit 75% Savings rate

At a 75% savings rate, it would take less than 10 years of work to accumulate 25 times the average annual living expenses suggested by ‘the 4% safe withdrawal’ rule. However, if you are keen to proceed to a higher difficulty, those pursuing FIRE often attempt to save 50% or more of their income.

It can be broken down in this table below:

Combining all the above points on savings rates and years it would take you to retire, here’s our very own simplified way for you to calculate: 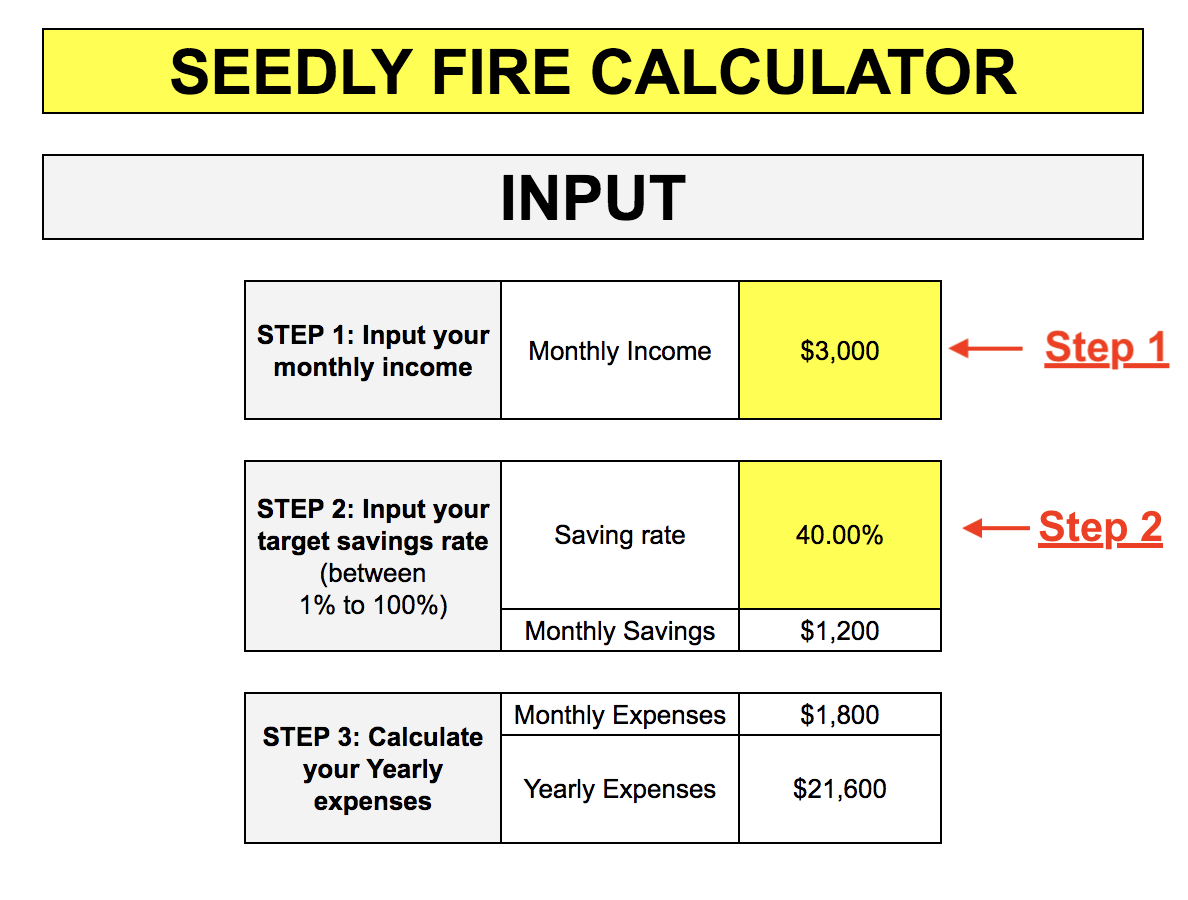 This Magic will be generated for you…

OUTPUT 1: Your FIRE amount you need

OUTPUT 2: Years of work to save up ONE year of living expenses

Some basic assumptions of this calculator:

6) Some Tips And Hacks For FIRE

I was having chat with Kyith from Investment Moats, one of Singapore’s very first financial bloggers and he actually gave me some very good perspective to share with our readers.

It’s really simple, looking at the formula above…

And by well, basically doing better than the average joe in Singapore. Because it is a pretty competitive environment here no doubt.

One quick tip on Savings, you would never know how much you are spending if you don’t track your expenses broadly, so I do recommend using a tool (eg.The Seedly app) or your own excel sheet to understand which areas you can potentially cut.

Focusing too much on yourself?

In true Singaporean fashion, it does at first glance, look like this FIRE movement is creating a wave of ‘giam-siap’ folks. People who are not generous because they are saving up for their early retirement and every dollar saved is a dollar earned.

Whilst that is true, you can also argue that perhaps there are ways to think of this whereby being self-sufficient, you are not requiring society’s support be it in terms of welfare or donations. Each individual should determine your own level.

Not having a family?

Again, I spoke to some pretty extreme FIRE folks before and their mindset is basically one where because it’s a bad financial decision to have kids, and your expenses can only go UP, not DOWN when you have mouths to feed, they choose to remain single.

I’m sure there are other factors as well, but the financial concerns come up the most.

I feel this is the biggest one which is a clear counter to the FIRE movement. Especially for millennials who grew up with the idea of You Only Live Once (YOLO).

My own father passed away at 53 years old due to brain cancer. He was actually on track to a very nice retirement lifestyle and had a good amount of fortune waiting for him as well. But lo and behold, he did not reach his CPF withdrawal age. Sounds scary, doesn’t it?

But it is real and a thought you should consider before jumping headstrong into this.

Missing out on opportunities?

I met this candidate once when we were hiring for a role in Seedly. He was aged around mid-30s, single. He actually shared that he has a very clear track towards retirement, hence he could not derail his plan basically to earn less than the market rate, at a startup.

But he was pretty passionate about the idea, mission and what we were doing, but simply because of his clear plan, he would choose to stick to his current job instead.

I’m sure this is one of many instances in the world out there, where you could be forced to choose a higher paying job, rather than something which you are passionate in, with less income.

8) Where Can I Find More Resources On FIRE?

Seedly is just one of the many communities out there speaking about this topic as it is indeed becoming a trending thing now for most millennials.

Here are a list of two resource blogs which you can find out more about how they think about FIRE. Some of my favourites in the local Singaporean context:

This guy, Brian Halim, has a young family and just bought a new home, cool story. Personally, I think most could probably relate closely to him if you also do plan to start a family soon.

“Thankfully, the FIRE movement gave people like me chances to outperform my peers on a different scale. It is not entirely about wits because otherwise, I would have fallen off the pack long ago.

One of the FIRE success criteria is to have perseverance and discipline and I had to work on my character build up over the years to get nowhere close to perfect.”

He is one of the legends here in this financial planning space, his wealth machine idea had guided me in around 5 years back when understanding about money and making my first investments.

“Wealth Machine(s) are the wealth assets that you acquire or manage, that generate the cash flows. You set aside your disposable income, and put them in these machine(s) in order to accumulate wealth.”