Fiverr (NYSE: FVRR) Share Price Down 24%: Is It Worth Taking a Second Look at This Company? 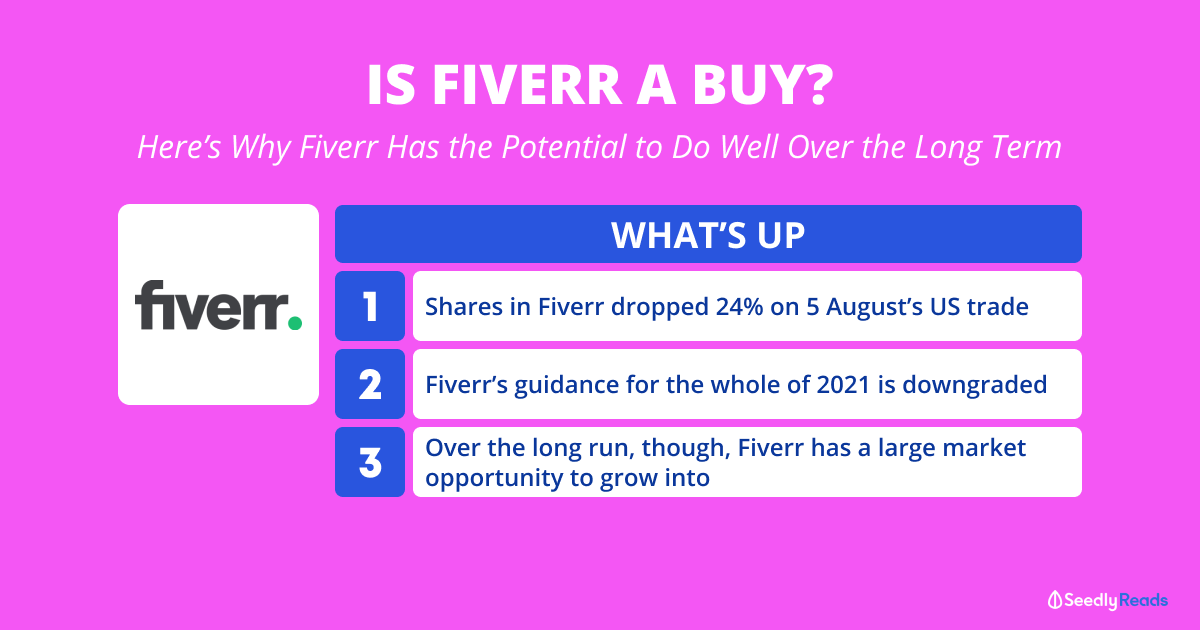 Fiverr (NYSE: FVRR) Share Price Down 24%: Is It Worth Taking a Second Look at This Company?

Over the past five years, Fiverr International Ltd‘s (NYSE: FVRR) share price has surged over 450%, with its business accelerated in recent times by the pandemic.

The company is a marketplace that connects freelancers and people needing freelancing services.

Is this an opportunity for long-term investors to pick up its shares?

That’s what we are about to find out right now.

On 5 August, before the US stock market opened, Fiverr reported its financial results for the second quarter of 2021.

For the latest period, Fiverr’s revenue grew 60% year-on-year to US$75.3 million.

The increase was driven by:

Fiverr’s gross profit margin stepped up for the quarter as well, from 83.1% last year to 83.4% in the latest quarter.

A company with pricing power could mean that it has a wide economic moat to prevent competitors from eating its lunch.

Even though Fiverr continues to be still loss-making, its operating cash flow for the quarter almost tripled to US$15.5 million, up from US$5.2 million a year back.

If I were to invest in a loss-making company, I would like it to produce cash at the very least. So Fiverr ticks the right box.

Overall, Fiverr said it grew significantly faster than its competitors and rapidly expanded its market share in the freelancing economy during the latest quarter.

However, what disappointed the market was Fiverr’s guidance for the rest of the year.

The company said in its earnings release:

“We are updating our full year guidance based on the incremental trends we have observed since the second half of May. People are traveling more and taking more vacations and spending less time online as many parts of the world reopen, which has impacted our financial outlook.”

As restrictions were mostly lifted in the US and Europe (where majority of Fiverr’s revenue comes from), people are taking time off, visiting families, and having a break from work after the extended period of staying at home.

That translates to people spending less time online and engaging on Fiverr’s platform.

But that is to be expected.

Even though the growth is expected to be lower for this year, a 48% growth at the lower end (if it materialises), is still high.

Fiverr’s Fundamentals Continue to Be Strong

I think the market’s over-reacting to Fiverr’s guidance, which, to begin with, is short-term in nature.

Fiverr’s spend per buyer has also grown strongly over the years as the company goes up-market.

The company launched Fiverr Business three quarters ago, but it already represents 5% of its core marketplace business, growing faster than its overall marketplace.

Fiverr Business is designed for companies to collaborate with each other while managing projects with freelance talent, allowing them to scale up their operations whenever needed.

Over the long run, with freelancing gaining wider acceptance due to the pandemic, Fiverr should continue doing well.

Fiverr estimates its total addressable market to be US$115 billion.

The company sure has opportunities to grow into its large market, not just the next few quarters, but for many years to come.

At Fiverr’s share price of US$175.06, it has a price-to-sales ratio of around 25x, which looks expensive optically. However, high-quality growth companies rarely come cheap.

We’ve released stock deep dive reports on a couple of companies, including Apple and Facebook. Grab hold of them at Seedly Rewards right now!

Disclaimer: The information provided by Seedly serves as an educational piece and is not intended to be personalised investment advice. ​Readers should always do their own due diligence and consider their financial goals before investing in any stock. The writer owns shares in Fiverr.