The news is officially out.

Here’s what investors should know about the proposed merger. 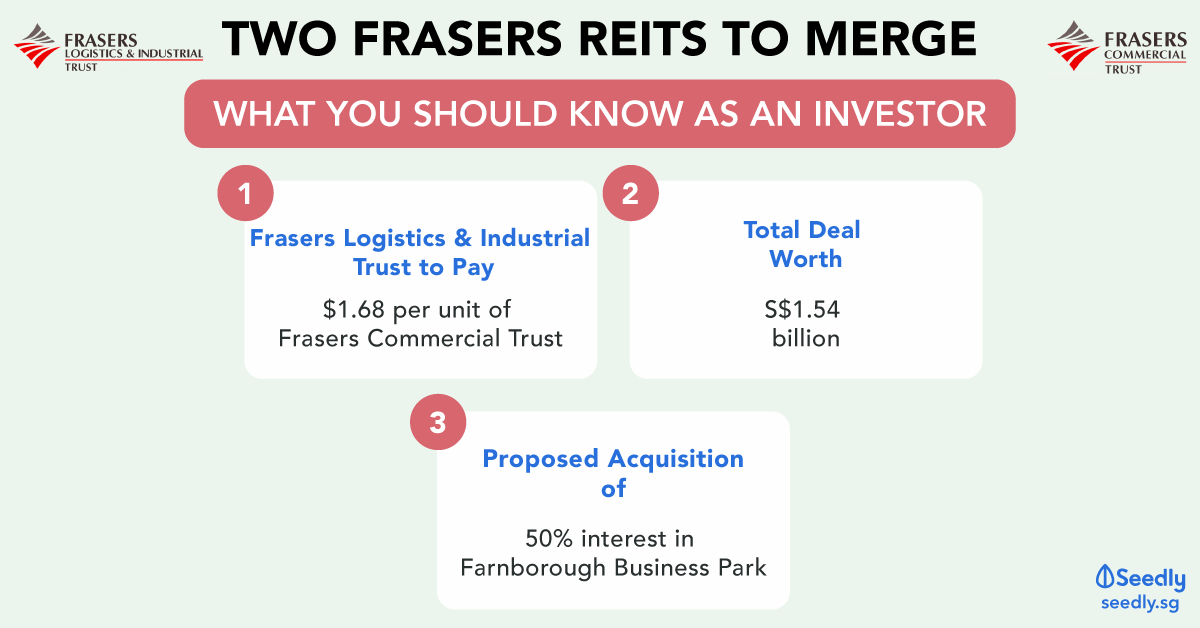 Some key highlights from the proposed merger:

What’s The Deal About?

Frasers Logistics & Industrial Trust is proposing to pay S$1.68 per unit of Frasers Commercial Trust. The amount is broken down into two parts: 1) cash consideration; and 2) consideration units.

Under the cash portion, S$0.151 in cash will be paid out for each Frasers Commercial Trust unit.

Under the units portion, 1.233 new units in Frasers Logistics & Industrial Trust at an issue price of S$1.24 apiece will be given out for each Frasers Commercial Trust unit.

The proposed deal will be by way of a trust scheme of arrangement, which will see Frasers Logistics & Industrial Trust acquiring all units of Frasers Commercial Trust for a cool S$1.537 billion.

Frasers Logistics & Industrial Trust also announced the proposed acquisition of a 50% interest in Farnborough Business Park (FBP), a freehold business park located in the United Kingdom, from its sponsor for around £90.1 million. The remaining 50% interest in FBP is currently indirectly held by Frasers Commercial Trust.

There are many benefits of the merger between Frasers Logistics & Industrial Trust and Frasers Commercial Trust.

Upon merger, the enlarged REIT will hold a diversified portfolio of logistics, industrial, office, business park and commercial assets worth around S$5.7 billion across the Asia Pacific, Europe and the United Kingdom.

The portfolio will comprise around 2.6 million square metres of space with some 300 tenants in 98 assets across five countries.

The enlarged REIT will also be one of the largest REITs in Singapore, possibly propelling itself to the ninth spot by market capitalisation (of at least S$1.0 billion) among Singapore REITs. Currently, Frasers Logistics & Industrial Trust is at the 15th place while its sister REIT is in the 24th spot.

Another benefit of the merger is that it will increase Frasers Logistics & Industrial Trust’s distribution per unit (DPU) and net asset value (NAV) on a pro-forma basis. Assuming that the proposed merger and the proposed FBP asset acquisition was completed on 1 October 2018, DPU would increase by 2.2% while NAV would go up by 9.5%.

Other benefits of the merger include bigger financial clout for the enlarged REIT to take on more debt, and more assets to acquire from its sponsor under the right-of-first-refusal (ROFR) agreement. A ROFR arrangement means that when the sponsor wishes to sell its property, the REIT will be offered the right to purchase the asset first before it is offered to the market.

The rationale for the proposed merger is summarised below:

In my opinion, the proposed merger and the proposed FBP asset acquisition are great for investors of both Frasers Logistics & Industrial Trust and Frasers Commercial Trust. Other than the DPU and NAV accretion, I feel the diversification of assets is something to shout about.

I personally wanted to buy units in Frasers Commercial Trust a few months back but was put off by the lack of geographical and asset diversification.

I like that Frasers Commercial Trust’s Alexandra Point has become relevant again in the office space after some asset enhancement initiatives (AEIs) that were completed earlier this year. The building’s occupancy struggled after Hewlett-Packard pulled out of Alexandra Point. Thereafter, committed occupancy at Alexandra Point dropped to 70.2% at end-September 2018.

The redeveloped Alexandra Technopark has attracted Google Asia Pacific Pte Ltd. Recently, the company agreed to take up around 33% of Alexandra Technopark’s total net lettable area for five years commencing in the first quarter of 2020. The new lease bumps up the asset’s committed occupancy rate to a healthy 96.8%, as of 30 September 2019. The recent signing rents were above the average passing rent before the AEIs.

The fact that Google has chosen Alexandra Technopark could attract other businesses to the property and further boost the occupancy rate at the building. Also, the development of the Greater Southern Waterfront could also have spillover effects on the property.

With an enlarged REIT, market watchers may take bigger notice, and that could re-rate the REIT higher. I’m also interested in the enlarged REIT now and will put it in my watchlist if the merger goes through.

A final thing to note is that the trust scheme will require the sanction of the Singapore High Court and approval from Frasers Logistics & Industrial Trust’s unitholders, among other things. The following is an indicative timeline of the whole process:

Does The Merger Look Good To You?

You can discuss more in the Q&A discussion below:

Disclaimer: The information provided by Seedly serves as an educational piece and is not intended to be personalised investment advice. ​Readers should always do their own due diligence and consider their financial goals before investing in any stock. The writer does not have a vested interest in the companies mentioned.